Vaughan Williams’s Symphony No.5 conducted by the composer on 3 September 1952

In the commercial CD-release, Somm’s notes mention that the release is the first ever of this particular recording. Unauthorized copies purporting to be this performance have been circulated for years, but according to Somm:

“… it does not contain the same performance – in fact it is markedly different and interpretatively quite unlike what we know about Vaughan Williams’s conducting style from his other recordings. Even if the origin of Eric Spain’s recording” (the acetate original that is the source of Somm’s release) “was unknown there could be no doubt which was the real thing…”

In light of that (and other comments) I wanted to compare the Somm release to my private copy of the performance. That private copy was from a CD-R sourced from reel-to-reel tape.

That initial CD-R had a number of problems. The record surfaces were very worn, it was not pitched correctly, and a very loud 9kHz whistle existed, most likely from the original AM radio transmission. Additionally, the first 18 seconds of the third movement ‘Romanza’ was missing. It is assumed that it was either not recorded or was on a damaged part of the original disc.

For my copy, I re-pitched all the movements, using Boult’s mono Decca recording as a basis of comparison. Narrow notch filters were used to decrease, though not eliminate, the whistle. The Boult performance was also used to patch in the beginning of the ‘Romanza’, with equalization performed to get it closer to the sound of the RVW performance. Surface noise from the original discs was mixed in to make the transition less jarring. Some spot de-clicking was done by hand to eliminate the most serious surface gouges. No other restoration work was performed on that file until this time.

On my request, Peter Joelson created an mp3 file of an extract of the Somm ‘Romanza’ movement. When I received the file, I translated it back into a mono wav format to compare to my private issue. While listening to the file, I noticed that it, too, had a patch at the beginning of the movement. That patch cross-faded into the rest of the file, but at 26 seconds (vs. 18 seconds on my file)

The first thing I did was to look at the wav files. Pulling up both files within my DC7 (Diamond Cut Audio Restoration Tool) software, the much noisier private copy (top in yellow) can be seen in comparison to the Somm file (bottom in gray): 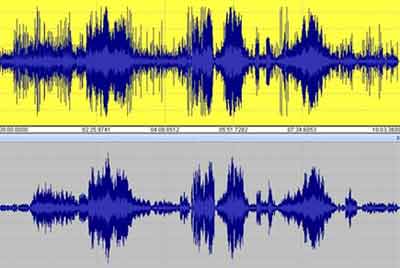 The surface noise present in the private issue, made a direct compare difficult. Even so, the general outline of the wave forms were similar, as were the timings:

(Note: times shown are for music performance only – run ins and run outs are ignored)

To make listening of the private issue a bit less distracting, I ran my Algorithmix Scratchfree program to damp down the surface noise: 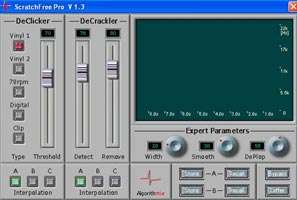 Listening to several samples in both files I was struck by the high frequencies in the private issue that did not exist in the Somm. I ran the spectrum analyzer on both files and compared the results: 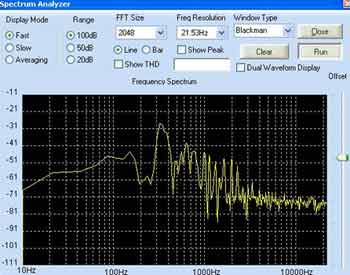 SOMM issue, near the same passage 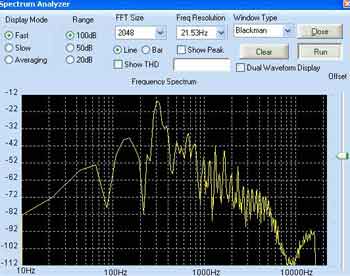 As can be seen, the Somm has a deep and wide filter at approximately 9 kHz, the same frequency as the AM radio whistle noted in the private CD-R. But there was also an unusual drop off at around 17kHz.

Several attempts were made to match the curve of the Somm: Through trial and error, the high frequency roll-offs were emulated in the private CD file using the filters seen below. Note the notch filter in the Paragraphic Equalizer had to be run twice to match the effects heard in the Somm file. The ’brick wall’ filter seen below approximates that steep drop off near 17kHz. Low end noise was rolled off using the final filter. 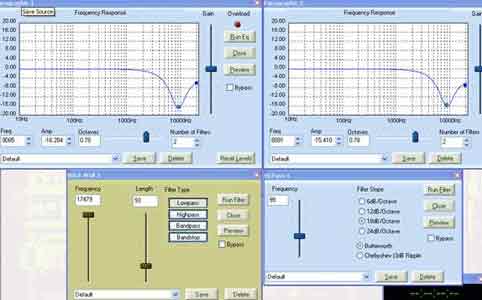 Another listening session was run. Now the private CD-R’s remaining equalization had to be addressed. Decreases reduced the AM radio ‘honk’ in the midrange. (Note: the source of the CD-R was from a collector’s tape deck known to have this unusual sound characteristic.) Two passes were needed with a 20-band equalizer. The second pass also decreased the remaining high frequency noise, getting quite close to the Somm sonic quality.

Another comparison of the waveforms displays almost identical patterns. The adjusted private CD-R graph is on top (yellow background), the Somm CD is at the bottom (gray background). The private CD-R’s larger waveforms in the quieter passages (especially in the beginning of the movement) can be attributed to the surface noise still present in the file even after the de-clicking process mentioned above.

What struck me in the waveform comparison is the consistency – the loud passages, the attacks, the decay of the audio signal, and the relative placement within and between the files. In my audio work, I have compared waveforms from different recordings of the same music many times. To my recollection, I have not seen such a close ‘mirror image’ of supposedly two different performances.

While the visual evidence is compelling, it does not prove that the recordings are the same performance, or sourced from the same discs. That determination can only be made by critically listening to both recordings, noting characteristics that exist in both files. I used non-musical sounds from the orchestra, from the audience, and from electrical / mechanical noise on the records or in the radio transmission. A comparison of the signals, non-exhaustive in nature, can be seen below:

The pattern of identical noises is quite clear, though a sharp eye can see that, as the files progress, the interval between the noises become shorter – 3.8 seconds to 1.8 seconds. This is most likely due to a combination of multiple tape generation source from the initial private CD-R, and small errors in my digital re-pitching of that recording.

As a last process (driven more by curiosity that science fact), I merged portions the Somm and the re-equalized private files: the Somm issue is in the left channel, the private issue in the right. The two channels were re-balanced for loudness (right channel decreased 1db)

The stereo waveform can be seen here – the Somm is the left channel (top), the private issue the right (bottom):

When listening to this file, the image or focus drifts slightly from center, to right and to left. The effect is easier experienced with headphones. This is due to the channel signals not lining up exactly.