This disc of James MacMillan’s sacred music presents pieces which were written for a variety of specific groups. Though all the music pushes the envelope in some way or other, MacMillan tailors his pieces to the abilities of the performers and always bears the context in mind. For MacMillan, context is all in these works: the words and their meaning, the background of the biblical text, and the devotional and liturgical use to which the pieces will be put.

The “Strathclyde Motets” is an ongoing series written for Strathclyde University Chamber Choir. The choir comes together periodically to sing the liturgy and perform MacMillan’s music. These are not concert works but are written for a specific liturgical purpose: they are all communion motets designed to be sung during or just after the administration of Holy Communion.

The result is dignified, liturgical and profoundly moving. ‘In splendoribus sanctorum’ was written not for Strathclyde University Chamber Choir but for MacMillan’s own parish church. The choral part inevitably has to be suitable for a talented, but mixed ability, choir. MacMillan has responded with haunting organum alternating with an evocative solo trumpet part. MacMillan has also written a number of other pieces for his church choir. The “Introit, Give me Justice” is melodic but quite tough in quality; it mixes the English verse with the Latin psalm.

For the origins of his “Missa Brevis” we must go back 30 years. MacMillan wrote the piece when he was 17; he has revised it only slightly. It is an impressive piece of work, recognisably in MacMillan’s style but having a different feel to the more contemporary works. It is more austere, with polyphony redolent of earlier models. The textures are perhaps sparser than in his later music and MacMillan says that his technique now has a greater concern for colour.

The music is often dramatic, richly textured and sometimes quite stark. Cappella Nova give the piece a beautifully fluent performance and it would seem to be within the capabilities of a good church choir. 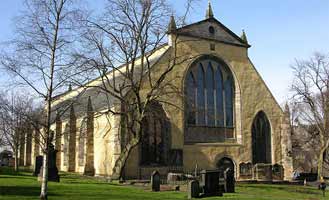 The “Missa Brevis” is followed by six further “Strathclyde Motets”, all richly textured and very evocative. This striking but sometimes hard-textured music must make a very strong impression when used within the context of the liturgy. MacMillan structures the pieces carefully, mixing quietly beautiful moments with more difficult sections. Homophonic, organum-like passages and plainchant are never far away.

For the final group of pieces, MacMillan presents us and Cappella Nova with a more significant challenge. His group of three “Tenebrae Responsories” are written for 8 solo voices and were commissioned by Cappella Nova. The texts all come from the Good Friday Responsories, but not all from the same Nocturne. MacMillan says that he was concerned not to set a uniform group of texts but may go back and set more Responsories.

Writing for solo voices and for a concert context, rather than a strictly liturgical one, MacMillan’s music here is more madrigalian, episodic, virtuosic and with close attention to the words. MacMillan makes use of silence and extremes of range; they are quite taxing pieces to sing and sometimes Cappella Nova sound as if it is being pushed towards its limits. The results are more dramatic than the “Strathclyde Motets” – darker, tougher and less approachable. They are testing for choir and listener alike but reveal great rewards.

The booklet contains a long interview between MacMillan and Rebecca Tavener. This contains a great deal of illuminating information about MacMillan and the pieces on the disc, but inevitably the interview format means that the article is rather discursive and it is awkward to find specific information.

MacMillan says that he has been writing more a cappella music recently; the results of this labour are both fruitful and rewarding. Cappella Nova under Alan Tavener give exemplary performances of some truly inspiring music.