Beethoven
Symphony No.1 in C, Op.21
Symphony No.4 in B flat, Op.60
The Ruins of Athens, Op.113 – Overture
Brahms
Variations on the St Anthony Chorale, Op.56a [Variations on a theme by Haydn]

Some excellent refurbishment has gone on here. The gramophone records used by “Audio Restoration Engineer” Mark Obert-Thorn for this production are getting on for 80 years old and by his own admission in his informative note were not always in ideal condition. Despite this, the results are surprisingly acceptable. Surface noise is heavier than on some 78-rpm discs of the period but it has been made smooth and consistent. Crackles have been suppressed but the refurbishment has not overdone the noise suppression and the ear soon gets used to the remaining background swish. There is, however, one particularly bad patch at the start of the finale of Beethoven 4 where for the first few bars, the orchestra struggles to be heard above the surface noise. Now, Casals makes the repeat in this movement and at the start of the repeat the recording is much clearer. This gives pause for thought. Mark Obert-Thorn is a ‘non-interventionist’ engineer; if he reduces background noise he takes care never to remove any music with it. If there is an inherent fault, as at this point in the Beethoven, he does the best he can while still remaining faithful to the original. This interests me because I have occasionally been asked to supervise refurbishments of historic recordings. Perhaps this would leave me open to the question: “would I have used the first few bars of the repeat in the finale to repair the faulty opening section?” My answer to this would be “You may think that, I could not possibly comment!”

Regarding repeats, in his booklet note, Colin Anderson draws attention to the curious selection of repeats in these performances and suggests, convincingly, that in the first and fourth movements of Symphony 1 and the first and third movements of Symphony 4, the omitted repeats were forced upon Casals by the limitations of the 78-rpm sides which could contain little more than 4½ minutes – and perhaps even less in the 1920s. Certainly, Casals’s extremely slow tempo for the Allegro of the first movement of No.1 meant that there was no chance that it would fit on the required two shellac sides. This theory is given further conviction by referring to recordings made by Casals in the LP era which show that he was far more generous with repeats than most of his contemporaries. 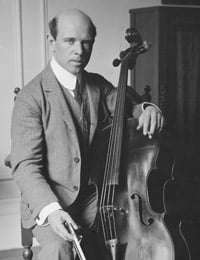 Given the severe limitation of the recorded medium of the day, this re-incarnation of a past age still makes fascinating listening. Casals was not the heavy Romantic; he shaped Beethoven firmly with none of the conventional tempo-changes of those conductors steeped in the post-Wagnerian subjective conducting style – a style that did not begin to go away until the mid-to-late 20th-century. In particular the Minuet (really a scherzo) of Symphony 1 is given as lively as a performance as I have heard. Now and again there is a surprisingly slow tempo – as for example Variation 5 of the Brahms – but there is never any untoward Romanticism of phrasing. There is some rather approximate ensemble in the Barcelona recordings but although the woodwinds are not always precisely together with the strings, their tuning is satisfactory.

The quality of the basic recording finds me searching for a word to describe it but “ancient” comes to mind. Though limited in range the strings of both orchestras are quite full in tone and help give the impression of a fairly full sound. The woodwinds and horns are mostly audible but the trumpets are in the far distance. As for the timpani it is often hard to discern them except on a few isolated occasions – elsewhere the drums provide little more than a sort of indefinable added weight rather than a tone although there is a hint of their presence when they are played quietly in the slow movement of Symphony 1, and in the important solo at the end of the Adagio of No.4 they are heard quite plainly.

The older Brahms recording is rather boxy but there is sufficient definition to make this strongly-phrased performance an interesting experience and, amazingly, the triangle is well audible in the closing pages. I have heard stereo recordings where this instrument makes less impact.

With this source material there was little chance of the restoration proving to be a sonic miracle but the resultant sound makes it possible to explore rare performances without the quality sounding troublesome to the ear.