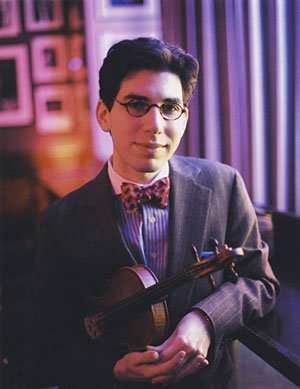 A dapper figure in his trademark bow-tie (he calls himself “a bow-tie activist”), the jazz violinist Aaron Weinstein has a disarming way with the droll humour that punctuates his act, and a likeable air of self-deprecation. He begins his performance by reading an e-mail from an irate correspondent who berates him for wasting his talent on composers such as Irving Berlin, George Gershwin and Vincent Youmans, “who are all dead”, rather than promoting modern classical composers who need exposure. In response to this, Weinstein announces that he has just composed a violin concerto in the style of Arnold Schoenberg, but he elects instead to stick with the berated popular composers, opening with three Berlin numbers, ‘Cheek to cheek’, ‘Easter parade’ (he points out that his is the “Jewish version”), and ‘Russian lullaby’.

Now 27 years old, Weinstein taught himself how to play the violin as a child, though he later won a four-year scholarship to the Berklee College of Music in Boston, Massachusetts. He made his first album at the age of 19 while at college, and has played with many of the finest names in jazz, including Dick Hyman, Bucky and John Pizzarelli, Annie Ross, Dave Frishberg, Linda Lavin and the late Les Paul at such venues as Carnegie Hall and Lincoln Center.

Before playing one of his favourite songs, Harold Arlen’s ‘A sleeping bee’, he discusses the song’s lyric-writer, Truman Capote, and quotes a section from his novella, Breakfast at Tiffany’s, in which Holly Golightly has dinner with four disparate friends, one of whom is described as being “as out of place as a violinist in a jazz band”. He acknowledges that for some the violin and jazz are not happy bedfellows, despite the acclaim granted Stéphane Grappelli, but for aficionados the sounds produced by such an accomplished musician and improviser as Weinstein is a real treat. Ideally, it would have been dandy had there been a vocalist to let us hear Capote’s lyrics, but his instrumental version of the song allows us to savour Arlen’s lovely melody before Weinstein and the excellent Dave Newton launch into their variations.

It’s all part of what Weinstein refers to as “an Arlen sandwich”, and it is bookended by ‘Over the rainbow’, given a beautifully relaxed interpretation on the mandolin, and ‘It’s only a paper moon’. After telling us that a friend’s favourite song is Youmans’s standard ‘I want to be happy’, he confesses that he is a little disturbed at the song’s “message of co-dependency”. Meredith Willson’s ‘Till there was you’ and James (‘Jimmy’) Van Heusen’s ‘Polka dots and moonbeams’ are also given beguiling riffs, and it was particularly pleasing to hear his violin caress the verse to the Gershwins’ ‘Someone to watch over me’. Weinstein’s is probably the jazziest of the acts that have so far played in the elegant Crazy Coqs venue. As an encore, Weinstein and Newton played the joyous ‘C-Jam blues’, Duke Ellington’s 12 bars so beloved of musicians and a foot-tapping finale to a swinging evening.