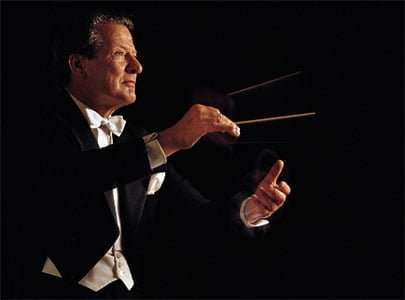 Pre-concert publicity suggested that Sir Neville Marriner – recently-turned 90, and still conducting (he’s at this year’s Proms) – would be waving his baton at this concert. Alas, it was maestro-less, with Tomo Keller leading the music. Sir Neville, however, was heard in conversation with David Mellor (ClassicFM’s “representative on Earth”). There were some great anecdotes and recollections of a long and ongoing career.

Sir Neville reminded us that the Academy was founded from a group of friends, some refugees from the London Symphony Orchestra, 56 years ago, who played for fun. Marriner played violin (see rehearsal footage below), but it was Pierre Monteux (1875-1964) who encouraged him to “be a man and pick up a baton”. There was the story of Arturo Toscanini (1867-1957) at the opening of the Royal Festival Hall in 1952 (audio of full concert below; Marriner was in the Philharmonia Orchestra): would Toscanini remember the National Anthem (he did), but he forgot about the Tragic Overture and thought Brahms’s First Symphony was the opening item. The one question from the audience enquired as to why The Academy is rarely heard in London, to which the reply was one of economics. Expensive!

Possibly because of my seat (very close to the players) there were problems with balances throughout, although most of the pieces were played with a hard-pressed urgency that ran counter to any sense of developing a line through them. Plus, the judgement in having something played simply because ClasicFM’s listeners voted for it was undermined by it being Samuel Barber’s Adagio for Strings, which when heard after Vaughan Williams’s Tallis Fantasia – albeit separated by an interval – made for an oddly-constructed programme.

The choice of Mozart was apt: The Academy having had its greatest success (recording-wise) with the soundtrack to Miloš Forman’s film of Peter Shaffer’s play Amadeus, music that was recorded before a frame of the movie had been shot – “a most agreeable way of doing things”, said Sir Neville. The Overture to The Marriage of Figaro highlighted from the off the problematic control of dynamics, with violins covering the details of other instruments, although this was most noticeable in the Vaughan Williams, where the second string orchestra was barely audible. When heard, the violas demonstrated the sweetest and most agreeable sound. A pedestrian tempo continued from the VW to the Barber, which ensured that the latter’s wrenching climax was underplayed.

Mozart’s ‘little G minor’ Symphony set off to a pounding pace and revelled in its Sturm und Drang style. There was finesse, too, again from violas, but horns were tricky to discern. The calm of the Minuet’s trio was a tonic, oboes, bassoon and horn complementing each other beautifully, but otherwise this was a rather relentless and breathless affair. My score has the finale ranging from p to f with only the final two notes being ff; would that have been heard here, as well as the pp in the opening movement.

There was an encore, the finale of Mozart’s Symphony in G (No.15, K124), which was dispatched in sprightly style. Mellor suggested that Sir Neville Marriner is someone that Britain should be proud of. I salute that sentiment.