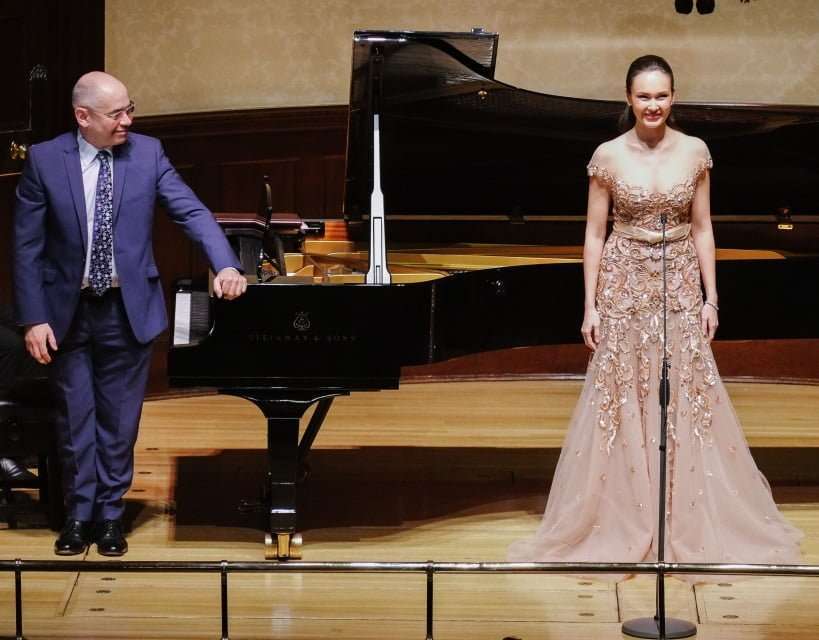 Making her London debut in the prestigious Rosenblatt Recitals series, Aida Garifullina lived up to her first name with a resounding success. Lovely to look at, she exudes charm and, in her mid-twenties, already has complete platform poise, having won Plácido Domingo’s Operalia competition last year and sung four roles at the Mariinsky Theatre in St Petersburg. She now has a contract with Decca.

Like the great Feodor Chaliapin, she hails from Kazan in Tatarstan, Russia’s ‘third capital’, but interestingly much of her musical schooling has been done in Nuremberg and Vienna. Despite this, German did not feature among the four languages she deployed at Wigmore Hall.

With Iain Burnside a reassuring presence at the piano, Garifullina began with the Snow Maiden’s aria about gathering berries, from the ‘Prologue’ to Rimsky-Korsakov’s opera. Those of us of a certain age learnt this lovely scene, from Antonina Nezhdanova’s ancient 78rpm disc. Garifullina sang it with equal yearning. Her tone, while lyrical, is quite full, with just a hint of Slavic ‘edge’ to lend it authenticity when singing in Russian – later, when she turned to Italian, this quality disappeared and the tone was fully rounded.

More Rimsky-Korsakov, his brief song ‘The Rose and the Nightingale’, confirmed the impression of an emerging star, as Garifullina leant into the phrases. Why do we hear so little of Rimsky’s vocal music in the West nowadays? Sung like this, it will always hit the mark. Tchaikovsky’s more substantial ‘Serenade’, beautifully accompanied by Burnside, was nicely shaped, with excellent rhythm. 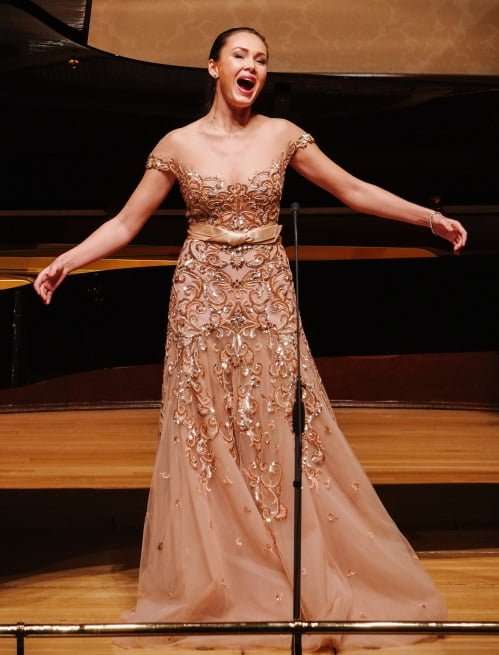 Garifullina switched to Czech for a nostalgic rendering of Dvorák’s ‘Songs My Mother Taught Me’, then moved into very passable French for Delibes’s upbeat imitation Hispanic confection ‘Les Filles de Cadix’, beloved of prima donnas ever since 1844.

A first half of just 30 minutes ended with ‘Casta Diva’ from Norma, where one really did miss an orchestra, even with a pianist of Burnside’s skill. Garifullina, while she sang well enough, projected neither a lyrical interpretation – which can work – nor a dramatic one. It was an interesting choice but one felt that something from one of the Italian roles she has sung in a staging – Susanna, Adina or Gilda – would have better suited her. At least one experienced voice during the interval discussions delivered the opinion that she might grow into a Norma, but personally I doubt it.

The second half found Garifullina completely at home in two Rachmaninov songs. ‘Lilacs’, with Burnside providing the perfect background, was thoroughly idiomatic and ‘How Fair This Spot’ was the highlight of the evening for me, perfectly poised with a superbly judge climax. It would be good to have Garifullina record some of this repertoire, to which she is totally suited.

The ‘Waltz Song’ from Gounod’s Roméo et Juliette took us back into French, well enough delivered, with good rhythm, but not quite in the classic light, frothy manner of great Gallic sopranos of the past. Then we returned to Nezhdanova territory with the ‘Hymn to the Sun’ from Rimsky’s The Golden Cockerel, sung with commitment.

For Leoncavallo’s Mattinata, the first song to be written specifically for the gramophone, a music stand was provided, perhaps because the soprano was unsure of the words – from my own singing days I recall that the composer’s Italian text is something of a tongue-twister. Garifullina sang this old chestnut with great enjoyment, while I tried to remember when I had previously heard it done by a soprano – I failed, but it came across well and perhaps more sopranos should try it.

Finally we had ‘Musetta’s Waltz Song’ from La bohème, which bore out my feelings about the Norma aria. Garifullina has sung this role in a production and it showed: at once she was into the role of the coquettish Musetta and her slinky portrayal, sung with relish, brought the house down. We were vouchsafed one encore, a heartfelt rendition of ‘O mio babbino caro’ from Puccini’s Gianni Schicchi, and an all too brief encounter with a delightful singer came to a close.

I hope Aida Garifullina will make many returns to London and that it will not be long before she appears at Covent Garden, where she undoubtedly belongs.