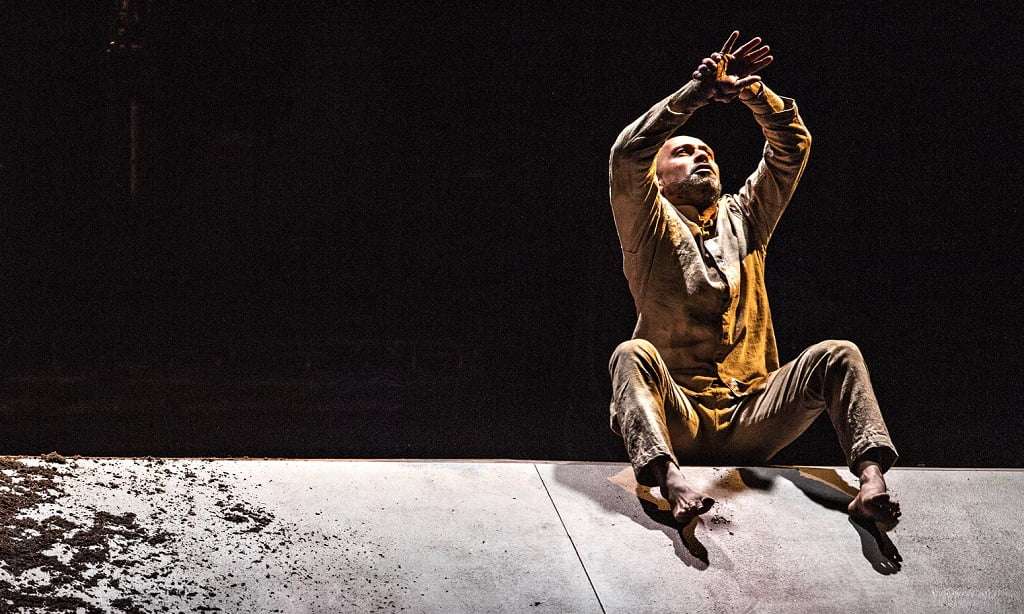 Akram Khan’s latest work is his last as a solo performer and, if it did nothing else, XENOS is powerful evidence of his considerable performing talents. But it is more, much more. It is a dark, sombre piece, a 65-minute solo for Khan who holds the stage and our attention throughout, which tackles large questions of history, time, myth, politics, war and humanity. Inspired by the untold story of the 4.5 million ‘foreign’ soldiers who died in The Great War (of whom 1.5 million were Indian), it focusses on Khan’s ‘character’ of an un-named sepoy who has been, before the conflict, a dancer in India. But this is no straight-forward narrative – Khan and his his numerous collaborators have come up with a multi-layered presentation which plays with time but also subject-matter. There are clear references to the legend of Prometheus, as well evocations of other influences, but to unpick each and every meaning would be to do XENOS a disservice as its effect comes precisely from the piling up of images and sounds, dance and lighting, music and set to create what is an overwhelming theatrical experience.

Time and again, we are reminded of WWI, from Mirella Weingarten’s extraordinary sloping set which evokes the lip if some huge trench, to the transformation of the strings of ankle bells which, when removed by Khan and crossed over his chest become cartridge belts. There are explosions and snippets of military standings to attention, but nothing is overt except the work’s opening, the memory of a shell-shocked sepoy of when he performed at a Nawab’s hose party back in India. Here Khan displays the pure kathak dancing of his initial dance training, but the purity of the dance soon dissipates as we are taken to the realities of the present. Cue the first of the evening’s many coups de théâtre: dozens of ropes which spill down the slope start to move, taking every item of furniture of the set up and over the top. 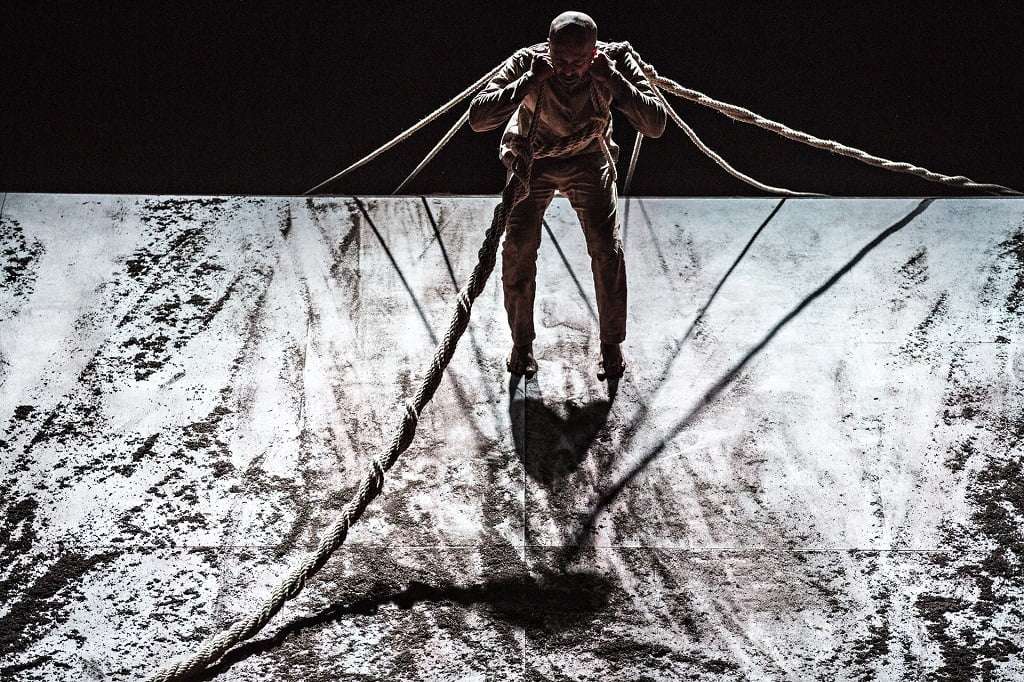 XENOS moves into more metaphysical and expressionistic territory thereafter, as image after image is created, and Khan presents the journey not only of this unnamed man, but of everyman, of aggressor and victim, of maker and destroyer, of the insider and the outsider. There are hints of the kathak dance of the opening section, but there is also movement of a far earthier nature. The slope itself becomes scattered with real earth, and, as Khan clambers up and slides down, as he wrestles with ropes and as he twists and turns, sweating from his exertions, his pale outfit becomes more and more dirty, until it is the colour of everything else on stage.

Sound and music are impressively varied, from the classical Indian music of the beginning to the instrumental, electronic and vocal contributions later on – even the Lachrymosa from Mozart’s Requiem. Michael Hulls’s lighting design is superb, playing on Khan and the stage in seemingly unending variations, while Ruth Little’s dramaturgy cleverly takes the audience through a variety of ‘scenes’, leading to a superb visual and emotional climax. And at its centre, Khan, whose performance never dims in intensity, such is his ability to hold the stage and propel the underlying narrative. As his last solo work, XENOS is a superb achievement, the creation of an artist of uncommon emotional, intellectual and theatrical maturity, and a moving exploration of what a cataclysm for humanity the First World War was.