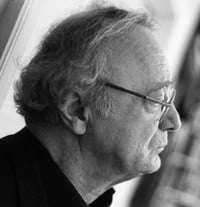 This was the first piano recital in the newly-refurbished Royal Festival Hall. Alfred Brendel had been the last classical artist to appear in the old Hall.

Much had been said and written about the ‘new’ acoustic of the Hall before a note had been played. Regardless of all the tests that have and, no doubt, will be been done, there is no substitute for listening in a filled-to-capacity Hall, such as on this occasion. What was obvious immediately was the clinical clarity of the piano’s sound and how directional the sound is; and how every rustle, cough, mobile-ring and sneeze from anywhere in the auditorium is audible: is this the Hall’s Achilles Heel? The piano’s tone lacked warmth and there was no reverberation at all. I was sitting ten rows from the platform, and I am told that the sound carries well to further back in the Hall.

Brendel deserves every honour he has ever received for not losing his temper on this occasion. It never ceases to amaze me how selfish and disrespectful some members of a concert audience can be – often demonstrating ignorance through coughing and unwrapping sweets and showing a complete lack of respect for the performers, the music and the rest of the audience.

Brendel produced a distinctive and convincing reading of the pieces in his recital. Haydn’s C minor Sonata was characterised by pointed, precise playing although some rests did seem to linger. He observed all repeats in the outer movements. Throughout, there was great care taken with dynamics and the couple of bars marked Adagio in the first movement evoked immense concentration.

The Beethoven received an account notable for its lyricism, despite the harsh effect of the Hall’s acoustic. This suited the first movement, the diminuendo shortly before the end having exquisite playing in the right hand. Brendel’s was a rather rapid account, seemingly keen to get to the Adagio; indeed the last note of the scherzo slurred into the slow movement, though, perhaps, Brendel didn’t want what some seem to think should be obligatory coughing between movements. By not trying to wring every last drop of sentimentality out of the Adagio Brendel was able to revel in the lyric aspects. Some of the power of the Fugue’s ff passages seemed subdued but the quieter passages evoked greater emotional sweep. Only at the very end did the piano explode, quite fittingly!

If looks could kill then the one that Brendel gave to a noisy woman in the audience during his playing would have caused her to be struck by lightening. Fortunately, this did not seem to upset Brendel too much until the woman made another loud noise and Brendel gave another scowl. He recovered himself quickly to give a flowing and rather beautiful account of the F minor Impromptu. Brendel has thought through the one in B flat, a Theme and Variations, very carefully. He clarified every nuance and was able to bring great drama to the final section, which found him at his virtuoso best.

There were parts of the Adagio in Mozart’s C minor Sonata that anticipated Beethoven’s ‘Pathétique’. By the end of the opening movement (both repeats observed) Brendel had cast a Mozartean spell, ideal for the calm and contemplation in the slow movement; Brendel’s delicacy was supreme.

As an encore Brendel gave the second Impromptu from D935, the one in A flat.