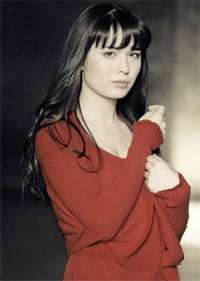 Marking her first return to the International Piano Series, this recital marked Alice Sara Ott move to the Royal Festival Hall from the Queen Elizabeth Hall with a well-judged recital programme that went from youthful Schumann, via exuberant yet mercurial Schubert, to Mussorgsky’s “frustratingly unpianistic” Pictures at an Exhibition. The two main works are well worn in for Ott, and have already been committed to disc, recorded live in St Petersburg last July (and a quick web search will bring up a live video from Verbier of the Mussorgsky), so it will be no surprise to read how at home Ott is in this repertoire. An advantage of the recital was the ‘correct’ placing of the Schubert before the Mussorgsky (the reverse of the ordering of the disc), although Schubert’s whimsical sign-off (the music evaporating as if played on a music box that has simply wound down) here didn’t segue into Mussorgsky’s ‘Promenade’ theme, as the interval intervened.

We started, in contrast to Schubert’s barnstorming opening movement to come, with an early attempt by Schumann to master a Sonata, the aborted attempt that left the Allegro in B minor as a stand-alone piece (it was to have been the Sonata’s opening movement). 21-year-old Schumann’s head was bursting with ideas that traditional sonata form could not suffice, with his heart leaning towards the brilliant style of Hummel much to the chagrin of his teacher Friedrich Wieck (father of Schumann’s wife-to-be, Clara). So the Allegro is more a fantasy, with tempo markings – from prestissimo to espressivo e molto lento and un poco più lento – never equating with the work’s title. Ott was flexibly responsive to all Schumann’s requests making this a remarkable successful opener, like an orchestral overture.

Schubert’s D major Piano Sonata – by way of marked contrast – opens with a rhythmically insistent movement of epic proportions, followed by the even longer slow movement (although typically marked con moto), a martial scherzo and then the bucolic finale with its tick-tock propulsion. Ott’s visible liking for the music was clear, the almost quizzical smile on her lips as she considered her handiwork. Since the photo-shoot for her album cover, she’s shortened her hair to shoulder length, although she still plays bare-footed (aren’t the metal piano pedals cold?) and here wore a flowing vivid-red dress to match the vibrancy of her playing.

And so to the Mussorgsky, played as he conceived it, for the piano. When Leif Ove Andsnes brought his version to the International Piano Series he was accompanied by a series of video projections, but the music doesn’t need it, just as it doesn’t need an orchestral transcription. Without any extra-musical interference, Ott fashioned the canvases of Viktor Hartmann that had inspired Mussorgsky. Perhaps because we know the work so well from orchestrations (Ravel’s in particular), it’s hard to comprehend how both in conception and style it is not particularly suited to the piano, for it worked extraordinary well in a performance like this. There was more. Working through Liszt for encores (‘La campanella’ ended her Queen Elizabeth Hall recital), here we had ‘La chasse’ – the E major Étude from the 1851 revision of his Paganini Studies – wit and style (and Ott’s impish smile) back on the platform one more time.