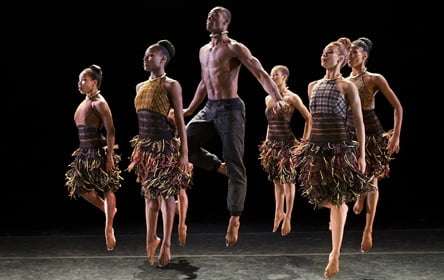 There is something quite life-affirming about Alvin Ailey American Dance Theatre (AAADT) which has just finished a two-week residency at Sadler’s Wells before a national tour. Its brand of dancing – modern-dance fused with plenty of African-American – makes for real crowd-pleasers, even if sometimes the actual quality of the choreography may not be top-drawer.

No complaints about Revelations. To call it the company’s calling-card would be to underestimate the totemic value it holds both for the dancers of the ensemble and for audiences. Alvin Ailey himself created it in 1960 and it became an instant classic – Martha Graham modernity combined with the deep religiousness of historic black communities of the Deep South. It is a heady piece, set to ten spirituals and church songs “sometimes sorrowful, sometimes jubilant, but always hopeful” in the choreographer’s own words. It is given at the end of every mixed bill, and it would be tempting to conclude that a degree of routine would creep into performance; not a bit of it. The dancers throw themselves heart and soul into their task, bringing spontaneity to what is, for them, utterly familiar. Each section was splendid, with Michael Francis McBride superb in the solo to ‘I Wanna Be Ready’ and the quicksilver trio of Colin Heyward, Jermaine Terry and Sean Aaron Carmon in ‘Sinner Man’. To see Revelations is to experience an essential element of American modern dance. Paul Taylor’s choreography is also essential viewing. Taylor, one of the most gifted of all American dance creators, has the finest of sensibilities, the widest of influences and the most catholic of output. AAADT has recently acquired his 1997 Piazzolla Caldera, and it immediately impresses with the sophistication of its invention and the expert use of the stage. Set to the engaging music of Astor Piazzolla and Jerzy Peterburshsky, it hints at just sufficient narrative to pique the interest while refracting the tango through the prism of Taylor’s modern dance aesthetic. Uneven numbers of men and women leads to two men dancing with each other, but the sultry, smoky sexiness of it all permeates whichever combination. AAADT performs it with gusto, clearly enjoying the slightly tongue-in-cheek posturing, and bringing muscularity to the movement. It contains one of the funniest and most inventive drunken duets, performed to dead-pan perfection by Kanji Segawa and Samuel Lee Roberts. 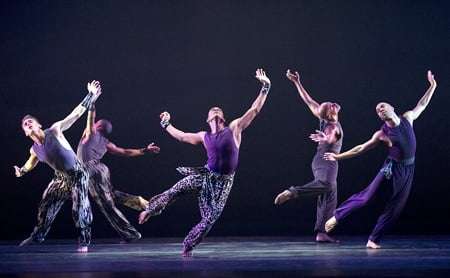 That muscularity does not sit as well on all types of dance, so the pas de deux from Christopher Wheeldon’s After the Rain did not work in quite the way it does when performed by a Classical Ballet pairing. While there was a not altogether invalid earthier, more floor-bound quality to the dancers, the seamlessness was lacking, robbing this duet of some of its impact.

Elsewhere, it was the variable quality of the choreography which did not always showcase the impressive dancers. Rennie Harris created Exodus in 2015, bringing his hip-hop background to this work with the company. It starts well, with dancers strewn about in evident mourning from those at their side; with the current epidemic of gun related deaths in black communities across the United States, the image is both startling and timely. A single figure, the extravagantly-named Jeroboam Bozeman, resurrects the corpses, the movements intriguing and satisfying as the bodies re-find motion and human meaning. The work ends strikingly, too, with a cast member ‘shot’ who falls back into Bozeman’s arms but in between, there is a hip-hop-style section which is uninteresting and, crucially, does nothing to illuminate whatever story is being told. 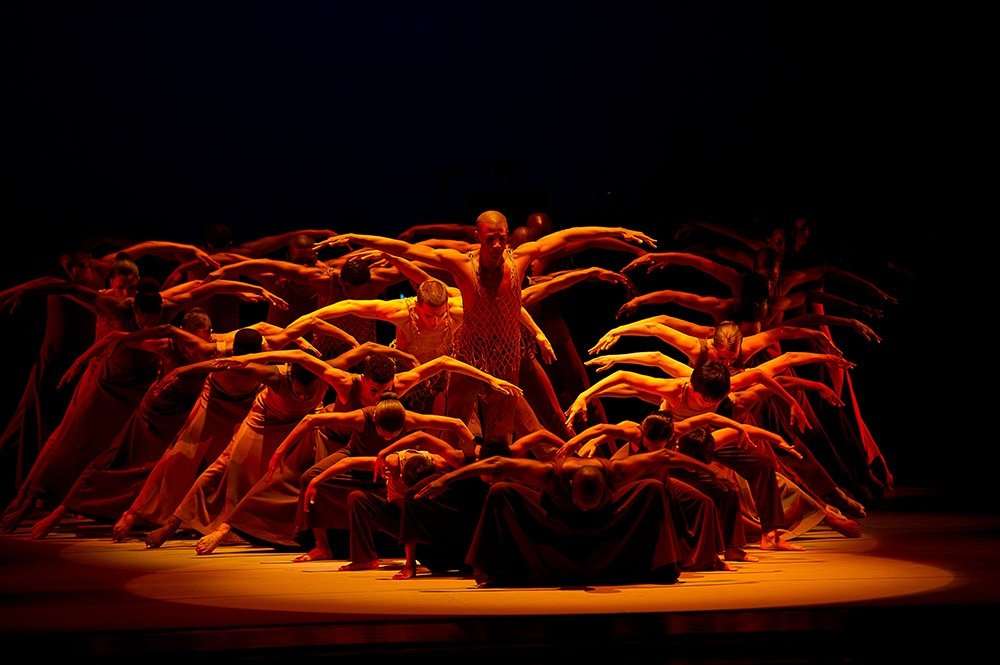 Four Corners by Ronald K. Brown is a fluent work, fusing modern dance movement with social and African dancing. It plays with pace, alternating whiplash speed with slow motion. The title refers to four angels who control the winds and bring succour and solace, but celestial radiance was in rather short supply: Brown displays great ease in his choreography which, however, never rises above the merely good. His Open Door is an enjoyable work, similar to Exodus. Initially, two lead dancers execute some intriguing moves, including almost militaristic arm-jerking, clenched fists and mysterious tracings of outline, but this gives way to a sort of Afro-Caribbean fiesta, with the other dancers entering heart-and-soul into the slinky moves. Both are satisfying in themselves, but less-so together which ultimately detracts from the overall impact. It was not favoured by being scheduled alongside the far superior Paul Taylor piece.