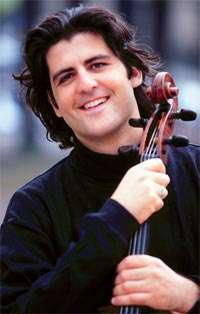 A soloist and a teacher – he is professor of cello at the Peabody Conservatory in Baltimore – Amit Peled began this recital with a piece connected to both activities. As he explained, he assigns the Sonata in G minor by Henry Eccles (1670-1742), originally written for Bass Viol and Fixed Bass, to his students to facilitate technique and tone production. If any of them were in attendance, they were treated to a gorgeous sound, although Peled was not playing his usual instrument.

Instead of his rare Guarnerius, Peled brought a cello built for him by Wolfgang Schnabel. It may not have quite the sweetness of tone of its venerated forebear, but it was impressive in its own rights. Especially in the Britten, one was relieved that he did not have to impose the occasional muscularity of his playing on a historical instrument. The Third Suite for Cello, like its two predecessors, was written for Mstislav Rostropovich, and gave Peled ample opportunity to demonstrate his rich expressive qualities and effortless technique. He not only played it, he lived it. Conservatories are churning out virtuoso players every year, but it is rare to encounter an artist like Peled, who brings analytical qualities as well as deep emotional involvement to the music he plays. From the starkness of the opening to the final ‘Passacaglia’ he gave an impressive and impassioned reading of this magnificent score.

The Schumann and Beethoven works showed Peled’s affinity to the Romantic repertoire as well. The Schumann pieces had a conversational quality to them, culminating in a strong and intense finale. An excellent pianist, Dina Vainshtein seemed to take on a slightly subordinate role here, but she asserted herself in the Beethoven. The very tall Peled creates a large presence and of an overpowering intensity as an artist, which would be difficult for anyone to match. In the Beethoven there were times where Vainshtein came close, particularly when setting the tone perfectly for the playful scherzo, but Peled was mostly in charge. From his opening solo he established a calm and comforting atmosphere, taken up sensitively by the pianist. In the finale they achieved a heartbreaking simplicity in the opening, and continued an animated interplay throughout the spirited movement.

The recital, entitled a “Cellobration”, concluded with Five Pieces on Folk Themes by Georgian composer and cellist Sulkhan Tsintsadze, written in 1954 and thoroughly conventional and charming pieces, mostly in the minor mode. After the initial ‘Villain’s Song on a Carriage’, there is a pizzicato movement, ‘Tchonguri’, imitating the guitar-like folk instrument, a tender lullaby, and two joyful dances. Peled and Vainshtein enjoyed characterizing each section to great effect. The moving ‘Prayer’, a movement out of Ernest Bloch’s suite, From Jewish Life, was the encore.