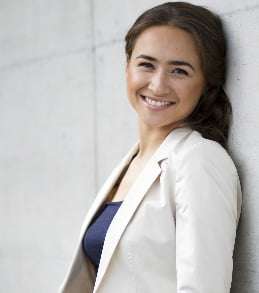 Anna Tsybuleva won the 2015 Leeds Piano Competition, but there was a degree of coolness over the result. This Wigmore Hall debut recital was part of her prize, and while her choice of repertoire showed off her stylistic adaptability and ferocious technical command, it made me less certain about her spiritual and emotional focus. This 26-year-old Russian has the toned looks and body of a gymnast, very much in keeping with her rhythmic, muscular playing and rapid-response attack, all of which radiated a very Russian style of pianistic discipline.

This was immediately obvious in C. P. E. Bach’s angular Fantasia in F-sharp minor, where she nailed the neurotic and bizarre changes of mood and direction with great panache, but for all her mercurial imagination, she couldn’t steer the music away from sounding like a particularly knotty, overwrought cadenza.

The attractive reserve of her playing in the opening of the Bach transferred well to the Theme that opens Etudes symphoniques, establishing a suitably neutral base for a mighty and authoritative performance that dug into Schumann’s volatile lyricism and made light of the formidable virtuoso challenges of this Etudes/Variations hybrid. The weight she occasionally needed for the big moments produced a rather thick tone, but otherwise her poise and clarity really drew you into the music’s inventiveness. The rhythmic bite of her playing in the sixth and seventh Etudes was a high-wire act of considerable brilliance, and she brought a Russian gravitas to the midway splendour of the Overture eighth Etude (and echoing the similar event in Bach’s Goldberg Variations). This was followed by the fourth of the discarded 1834 Etudes, played by Tsybuleva with a fine rhapsodic repose, blown away by her brilliance in the accumulative power of the Finale.

I was less convinced by Nikolai Medtner’s Sonata in G-minor, a one-movement work along the lines of Liszt’s B-minor counterpart, which hovers uneasily between Scriabinesque hyperbole and Lisztian heart-on-sleeve big gestures. Again, Tsybuleva resorted to her generic thick tone in the big moments, and if her account lacked for focus that is largely the fault of the music and didn’t reflect her spirit and self-possession.

In her Debussy sequence, she missed the elemental mystery of ‘Voiles ‘but was at her decisive best in the rhythmic games of ‘Minstrels’, and her finesse and colouring in ‘Feux d’artifice’ were exceptional. L’isle joyeuse initially came across as too schematic and calculated – that is until her incandescent throwing caution to the winds in the closing page.

I think this fine pianist missed a trick, especially in a debut recital on the back of winning one of the great piano competitions, by not trying her audience out on more mainstream works. Her imperious, Baroque style would have come across just as strongly in J. S. rather than C. P. E. Bach, which would have better complemented the Schumann, the high point of her recital. In turn, the Schumann had me wondering what she’d do with a big Beethoven Sonata, interior Chopin or transcendent Liszt – and she didn’t reveal that unmissable an affinity with Debussy. Dame Fanny Waterman, who retired as the Leeds Chairman following the 2015 Competition, was in the audience. I wonder what she thought, and of Tsybuleva’s over-reticent encore, a further Debussy Prelude, ‘La fille aux cheveux de lin’.