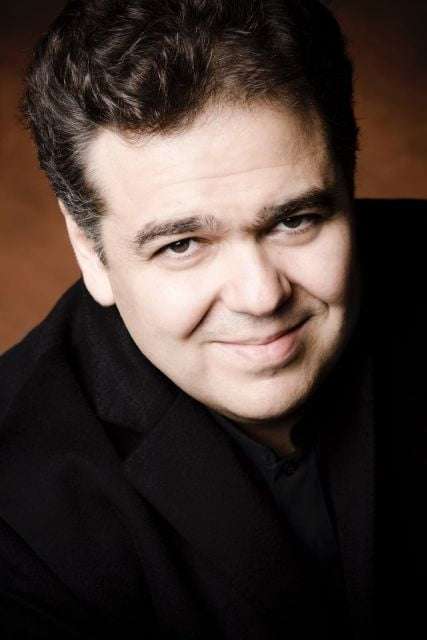 It has been a while (2015, also at the Barbican) since Arcadi Volodos last played in London, and I had forgotten just how completely this artist can draw you in with his extraordinary command of dynamics and tone. You think piano sound can’t get any quieter, but it does – and Volodos is no stranger to barn-storming heavy lifting. Heaven knows what degree of muscular micro-management a pianist needs to achieve that, especially since it sounds like a natural extension of his approach to music. At its softest, his sound is so disembodied it barely supports life. When he goes into the realm of forte and fortissimo, the result is coloured with resonance and warmth.

Then, not only is his playing style unfussy – he sits on an office chair – it also has an energy-saving pragmatism to it. His manner reminds a bit of Jorge Bolet, in that you sense his hands have a life of their own, as directed by him. Then again, you sense a centred mindset that understands without being intrusive, enhanced by an apparent modesty as disarming as his profoundly eloquent, low-profile technique.

Volodos has something of a tendresse for early Schubert Sonatas, and he opened with the First, which leaves you hanging in B-major at the end of the Minuet and Trio for want of a Finale. It opens expansively with moments of surprise, recalling Haydn, and harmonic re-routings anticipating Schubert only a decade later, near the end of his life and at his most searching. Most of the interest lies in the slow movement, which Volodos steered into some remote areas of muted colour and understatement to make the animated middle section all the more eruptive.

The collection of six Moments musicaux occupied Schubert up to the year before his death, and Volodos shaped them so well in terms of touch and expression you noticed their relatively simple layouts less than their suitability to his powers of concentration. He retreated into their inimitable lyricism and gently mobile rhythms with such deep identification that you can easily persuade yourself that this is how Schubert would have played them. The more interior the piece – III and VI – paradoxically the more communicative his playing became.

This recessed quality lingered over the interval into the first of the Rachmaninov pieces, the familiar Prelude in C-sharp minor, in a reading that skirted around grandiloquence to give the music’s shadows their say. Without any rhetorical pile-up he made the great Prelude in B-minor’s vision of leaving life intensely poetic, with a marvellously graded fall-out after the central climax, all of it enhanced by some discreet but luxurious pedalling. Throughout the set, Rachmaninov’s inimitable conjoining of rapture, nostalgia and melancholy flourished in Volodos’s subtle singing tone.

Four of the six selections from Scriabin were billed as dances, and they did make you speculate on the composer’s prowess on the dance floor – for him, you might speculate that is more a state of mind. I liked the way Volodos flattered the composer’s prodigious chromaticism with the sort of atonal dignity of Schoenberg, a floating world of modernity rather than a surge of overheated ecstasy that brought its expressive reach under one umbrella, but the virtuoso gloves were off in a brilliantly coloured and executed account of Vers la flamme, Scriabin’s evocation of purifying immolation.

A five-piece suite of encores rounded of a generous programme – Schubert’s Minuet in C-sharp minor (D600), Jeunes filles au jardin by Federico Mompou, a magnificent account of Brahms’s ‘Dies irae’-infected E-flat minor Intermezzo from Opus 118 played to live-up to its description as one of the saddest pieces of music, the ‘Sicilienne’ from J. S. Bach’s arrangement of Vivaldi’s D-minor Violin Concerto, and for Scriabin addicts another dose of ecstasy with the Prelude in B – which took the recital past ten o’clock.