Tavener
To a Child Dancing in the Wind – He Wishes for the Cloths of Heaven
Elgar
Sospiri, Op.70
Handel
Giulio Cesare in Egitto – Si pietà di me non senti
Holst
I Sing of a Maiden
Britten
Les Illuminations – Phrase; Antique
Purcell
Dido and Aeneas – Thy hand, Belinda … When I am Laid in Earth
Elgar
Introduction and Allegro, Op.47
Vaughan Williams
Five Variants of Dives and Lazarus
McCartney
Jenny Wren
Lennon/McCartney
Across the Universe
Winehouse
Love is a Losing Game
Drake
River Man
Radiohead
How to Disappear Completely
Sting [aka Gordon Sumner]
A Thousand Years 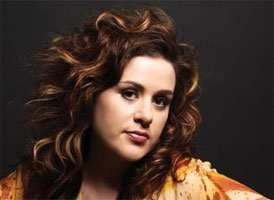 This Perth concert was part of “Sublime”, the Australian Chamber Orchestra’s second Australian tour for 2008, which saw the ensemble join forces with pop, jazz and sometime classical singer Katie Noonan for a celebration of English song spanning not only centuries but genres.

The first half comprised a selection of classical songs and arias ranging from Purcell to John Tavener; these were complemented by two works for strings by Edward Elgar, first Sospiri, then Introduction and Allegro. The second half commenced with Vaughan Williams’s Five Variants of Dives and Lazarus, after which the ACO and Noonan were joined by New Zealand guitarist and composer Cameron Deyell for a set of pop-songs from the last century and this one.

Although this project must have looked good on paper, in practice it proved somewhat less than a ‘sublime’ experience. This was largely due to a disappointing first half, in which Noonan failed to come to terms with the myriad stylistic differences and expressive possibilities of the music. But even the second, ‘pop’, half was strangely disappointing.

Noonan is the daughter of opera singer Maggie Noonan and studied both opera and jazz at the Queensland Conservatorium, but her success has mainly been in the pop field, especially with her band, George. Hers is a somewhat girlish, breathy soprano, with an attractive top which was used to good effect in Tavener’s ethereal ‘He Wishes for the Cloths of Heaven’. The Holst was also sweetly sung, although here, as throughout, one had to battle to understand even a single word. This proved fatal for the Purcell, Handel and Britten – as did the lack of variety of approach.

The second half contained much of interest, although even here, despite Noonan probably being more at home, something was lacking. Best were Paul McCartney’s folksy ‘Jenny Wren’, Amy Winehouse’s smooth, groovy ‘Love is a Losing Game’ and, as an encore, Leonard Cohen’s ‘Hallelujah’. The exotic sounds of Sting’s ‘A Thousand Years’ almost came off, but Nick Drake’s ‘Riverman’ and Radiohead’s ‘How to Disappear Completely’ simply lacked impact.

For its part, the ACO played with its usual aplomb, the Introduction and Allegro being especially fine. As far as the concert as a whole went, though, perhaps one had to be a Katie Noonan fan. Comments from audience members ranged from “dreadful” to “one of the greatest concerts I’ve ever been to.”