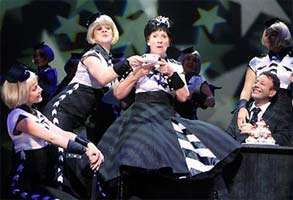 The television series of “Bad Girls” ran from 1999 to 2006 and is still being shown around the world and repeated here on satellite channels. After the initial indifference by both critics and audiences, the series took off and became one of ITV’s most popular shows. Its writers, Maureen Chadwick and Ann McManus went on to further success with “Footballers’ Wives” and now “Waterloo Road”, with their new show, “Rock Rivals”, coming soon to ITV. After Australian television gave us “Prisoner Cell Block H” (which also became a stage musical, with Lily Savage), “Bad Girls” returned the gesture and has aired ‘down-under’, too. Now it’s a new British musical (transferring from the West Yorkshire Playhouse to London’s Garrick Theatre) and it could well be the best British musical of the year.

The same authors are still involved and they have taken plot-lines from the early series, added songs by Kath Gotts who has written much of the incidental music for several of the “Bad Girls” TV series and, by golly, it works very well, despite its subject matter, on the level of pure entertainment. 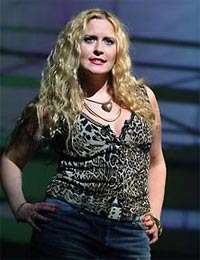 The setting is HM Larkhall women’s prison, in particular G wing, which has a new governor in Helen Stewart who forms a lesbian attachment with one of the prisoners, Nikki Wade. The TV series was notable for dealing with important subject areas such as drugs, pregnancy, bullying and illicit sexual relationships between prisoners and prison staff. The bad man here is prison officer Jim Fenner who can’t keep his hands off the inmates who are happy to co-operate in return for other favours. With the arrival of Yvonne Atkins, the women are soon encouraged to fight back against the corrupt system overseen by Fenner and his sidekick, wardress Sylvia Hollamby, known as ‘Bodybag’. 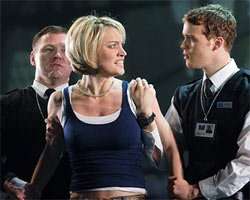 In between the plot there are some good numbers in a range of contemplative ballads and upbeat production numbers that give the downbeat plot a real lift. There are even a couple of very camp fantasy sequences straight out of Busby Berkeley and “A Chorus Line”. The large cast is well-drilled and puts across the musical numbers with great vigour. Three original members of the TV cast are in the stage show: Helen Fraser as Bodybag, who finally comes into her own in a dance routine; Maria Charles as slag of an old lag, Noreen Biggs; and Nicole Faraday as Shell (although she originally played Snowball). Sally Dexter as the flamboyant Yvonne Atkins nearly steals the show by sheer force of personality, and the ever-reliable David Burt, veteran of so many London stage musicals, lends a certain humanity to the villainous Jim Fenner.

“Bad Girls” is nothing if not involving and should appeal even to those who have never seen the TV series. Not entirely mindless, it is popular entertainment at its best, well-staged and performed and deserves a long run, until, that is, the same writing team decides to mount “Footballers’ Wives” as a West End musical – yes, bring it on!