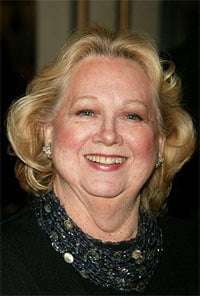 Barbara Cook was 80 years old on 25 October. We don’t have to believe it if we don’t want to. I cannot think of another singer or performer of any kind who is still at the top of their game as Miss Cook is. The word ‘legendary’ is bandied around without a thought of what it means but at this World AIDS Day charity concert which also marked Miss Cook’s four-score years, legendary is really the only word to describe this most unassuming of actress-singers. She began her musical career in cabaret at the New York Blue Angel club and subsequently made her Broadway debut in the 1951 musical “Flahooley”. Although it was written by E. Y. Harburg and Fred Saidy who had had a success with “Finian’s Rainbow”, and had music by Sammy Fain, “Flahooley” was not a success. Its tale of puppets and big business was probably a little too twee for its audience and the show closed after forty performances. However, it did launch Barbara Cook into musical theatre and she went on to appear in revivals of “Oklahoma!” and “Carousel”, “Plain and Fancy”, Leonard Bernstein’s “Candide” (in which she introduced ‘Glitter and be gay’), “The Music Man” and “She Loves Me”. Although she didn’t get to do the film version of “The Music Man”, she did win a Tony Award for her stage role as Marian the librarian.

More musicals came her way in the 1960s, such as “The Gay Life”, “The Grass Harp” and revivals of “The King and I” and “Show Boat”, but as the Broadway musical changed, there were no parts for Barbara Cook. In 1975, after meeting composer and arranger Wally Harper, who became her musical director for thirty years, she reinvented herself as a recording artist and cabaret and concert singer, beginning with her famous Carnegie Hall comeback in 1975. Since then she has toured the world singing some of the great songs of Broadway and also taking on newer material while still concentrating on the timeless creations of Irving Berlin, Jerome Kern, Rodgers & Hammerstein, Harold Arlen & Johnny Mercer and, of course, Stephen Sondheim.

Producers Richard Morris and Doug Pinchin had the idea of staging an eightieth-birthday tribute to Barbara Cook while also raising money for World AIDS Day, something Barbara has supported in previous years. It took the form of two sets by the diva herself interlaced with party pieces by some of her friends and colleagues. What could be more appropriate to begin such an evening than the Overture to Leonard Bernstein’s “Candide”? Lee Musiker, Barbara Cook’s musical director since the death of Wally Harper, conducted the orchestra assembled for the concert, opening the show with all the panache and vivacity that is inherent in the music itself. Barbara’s first number was also by Bernstein, ‘Lucky to be me’ from “On the town”, a song that perhaps sums up the Cook philosophy. She is lucky to be her indeed with such an amazing voice that seemingly has not changed over the past sixty years. Her range is still brilliant, the voice is crystal clear, and her enunciation is perfection itself. She values lyrics as well as melody and any songwriter would be pleased to hear Barbara sing their work, as she tellingly pronounces every syllable. Her approach is to play-out each song as if it were a one-act play. She can take a fairly ordinary song such as ‘There’s a rainbow ’round my shoulder’ or ‘Give me the simple life’ and turn it into a little gem, as she did here. Her version of Chaplin’s ‘Smile’ would have you weeping.

However, get Barbara onto something really outstanding, and you have a collection of masterpieces given new life. This she did with such Rodgers & Hammerstein numbers as ‘Wonderful guy’ and ‘This nearly was mine’ and Stephen Sondheim’s ‘No one is alone’ and ‘No more’. Having such great musical taste Barbara Cook can really do no wrong and she gave us great interpretations of Irving Berlin’s ‘I got lost in his arms’, Harold Arlen and Johnny Mercer’s ‘Accentuate the positive’ and ‘I had myself a true love’. Her duet with Anne Reid in ‘Bosom Buddies’, from Jerry Herman’s show “Mame”, and her solo version of ‘My dog loves your dog’ demonstrated a great sense of humour. But then she can go straight into a torch-song or a jazzy arrangement with just a three-man combo for ‘Lover come back to me’, with equal aplomb.

The guests did their party pieces very well. Sian Phillips was a hoot in Noël Coward’s ‘Bar on the Piccola Marina’, Anna Nicholas did a kookie version of ‘The Boy from…’ and Daniel Evans pulled all the stops out for ‘Being alive’ from Sondheim’s “Company”. Ruthie Henshall was affecting in ‘Memories of you’, Sally Anne Triplett sang up a storm for ‘East River calling’, while Graham Bickley and Charlotte Page revived memories of ‘All I ask of you’ from “The Phantom of the Opera”. Scarlett Strallen and Rebecca Thornhill proved indisputably that ‘Diamonds are a girl’s best friend’ and then everybody including the Arts Ed Company performed great versions of Sondheim’s ‘Putting it together’ and ‘Now you know’.

Part Two provided us with Sian Phillips and John Standing doing a delightful version of ‘I remember it well’ from “Gigi” and Elaine Paige belted out ‘I know him so well’ and ‘Cry me a river’. The birthday surprises for Barbara included messages from friends who couldn’t make it, such as Michael Ball who was appearing in the Royal Variety Performance. Barbara’s great friend, opera singer José Cura, sent his son with a message and a bouquet. After an a cappella version of ‘Some other time’ (Bernstein), which Barbara sang beautifully, filling the London Coliseum without the need for any amplification, we all went home feeling very much better.