For the fourteenth of its nineteen events the Barnes Music Festival once again hosted a concert in the attractive location of St Mary’s church, this time in association with the Barnes Music Society. 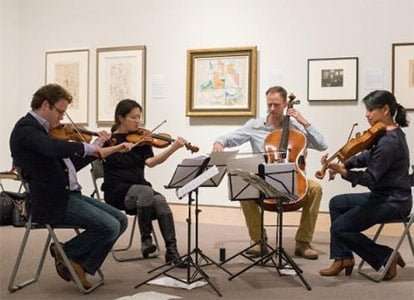 Robert Still (1910-71), his First Quartet opened the programme, is one of those almost-forgotten English composers whose work is now being brought to light. During his lifetime, performances of his music were limited: a few chamber works appeared on LP, and perhaps his greatest success came with a 1962 recording of his Third Symphony by the London Symphony Orchestra under Sir Eugene Goossens: Goossens’s last conducting engagement before he died. And not long before the composer’s own death his Fourth Symphony was recorded by the Royal Philharmonic Orchestra under his protégé Myer Fredman. Still wrote four string quartets, all of which the Villiers Quartet has recorded for a forthcoming issue on Naxos. The thirteen-minute-long First was premiered in 1948: for a second public outing the work has had to wait until now. Rather like the music of William Lloyd Webber, Still’s composition style is uncomplicated, very conservative for its time and provides a pleasant listening experience. The writing is skilful, but the level of invention is not very high. The Villiers musicians at once showed high technical quality and interpretative insight in a sympathetic performance.

Delius’s only String Quartet is a challenging work for its players. Its chromaticism and lush harmonies demand precise intonation and great care in the use of tempos, phrasing and dynamics. It isn’t a great work, and certainly not Delius at his best, but it has some inspired passages and is intensely expressive and emotional. The Villiers Quartet succeeded triumphantly in this perfectly judged reading, every one of Delius’s little tricks of rubato beautifully observed. It was no surprise to learn that first-violinist James Dickenson studied the work with the late Christopher Rowland of the Fitzwilliam Quartet, a group that still has this work in its repertoire and which made a distinguished recording of it in 1978.

After the interval Daire Halpin joined Dickenson in Holst’s Four Songs. It would have been helpful if the programme-note had revealed that the texts were by unknown authors collected in Mary Segar’s “A Medieval Anthology”, published in 1915, and even better if the texts had been printed, but Halpin sang very beautifully, and the expressive nature of the songs, if not their content, came across well.

Elgar’s sole String Quartet explores extended reaches of tonality and for its almost ghostly central slow movement, marked ‘Piacevole’ (peacefully). In this movement the Villiers players chose a tempo that was perhaps a little too brisk to reveal fully the ethereal elements of music that seems to come from another world, but elsewhere they showed close emotional identification with Elgar’s inspiration. Their energy, depth of feeling and almost fierce commitment in the finale was particularly impressive.