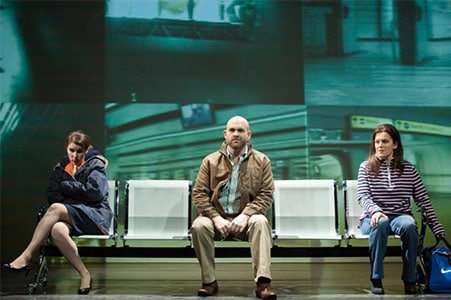 In response to David McVicar’s ROH production of Gounod’s Faust come two alternative takes on the Faust myth. This one, Through His Teeth, by composer Luke Bedford and playwright David Harrower, is more a reflection on deception than on infernal pacts (the other, by Matthew Herbert, promises to be just as contrasting in different ways.) David Harrower, no stranger to themes of deception, disillusionment and dire consequences, is perhaps best known for his play Knives In Hens, and here remains true to form in his unswerving ruminations on the terror of false emotions.

The plot centres on a woman, A, who is being interviewed about her involvement with someone who, it quickly becomes apparent, is a serial conman, who leaves a trail of wrecked lives as he manipulates vulnerable women into bed, a relationship, and finally into believing he works for MI5. Based to some extent on real-life examples, this presents an ironic challenge for any writer – those not under the mesmerising spell of a pretender cannot possibly understand why anyone would fall for the illusion – and it is this problem that never seems fully resolved through the course of this 55-minute work.

The production plays fairly heavily on the notions of obfuscation and half-glimpsed truths, with huge sliding grills crossing the stage repeatedly. While this makes for some slick scene-changes, it also feels overly complicated against the rest of the sparse set, as well as being distractingly noisy. Similarly, banks of CCTV images, footage of terrorist attacks and sexually-explicit lyrics are more off-putting than effective, as well as of questionable taste. In the end, though, the aesthetic is coherent and unified, and certainly presents a powerful backdrop to the unfolding action. 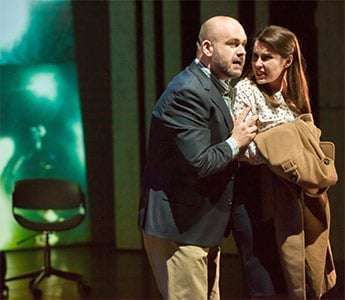 The over-riding effect of the score is to create and sustain tension, and Bedford’s music certainly achieves this, with long passages of low, sinister harmonies interrupted by nervous flourishes. His orchestral style creates a succession of curious, unsettling textures. The occasional appearance of an accordion conjures the ghost of ironic romance, while the use of a milk-frother on the harp strings raises unheeded warning shots of icy terror early on. Notably, the music intelligently supports the frequent elements of knowing humour in the lyrics, creating a surprising number of comic moments in what is essentially a frighteningly bleak tale.

Anna Devin, as A, gives the character a believable emotional frailty and vulnerability – no easy acting task – but the text is obscured at times through angular melodic lines. Although powerful at significant points, she is also sometimes overpowered by climactic orchestral passages, which detract from those pivotal moments. Victoria Simmonds, playing both the Sister and the Interviewer, brings excellent characterisation to the roles through both vocal inflection and tone, and Owen Gilhooly, as the sociopathic R, manages apparently effortlessly to capture the smooth, convincing fraudster whilst allowing us glimpses of the undercurrents of fear and violence within him.

In Shakespeare’s A Midsummer Night’s Dream, Philostrate, in describing the flawed work of the Rude Mechanicals, proclaims “a play there is, my lord, some ten words long, which is as brief as I have known a play; but by ten words, my lord, it is too long, which makes it tedious.” Whilst it would be utterly misleading to suggest we are anywhere near tedious in this case, there is still something resonant about this description. At 55 minutes there feels little space for characters to settle or develop, which leaves us doubting the formation of the central relationship. Similarly, a large section of the later action is given over to the painful fallout from it, which, without the emotional investment preceding it, feels strangely less relevant than it should. Harrower has produced many stunning plays, and Bedford’s music is certainly convincing – maybe the short format combined with the nature of the plot make for an intractable, and to some extent unsolvable, problem.