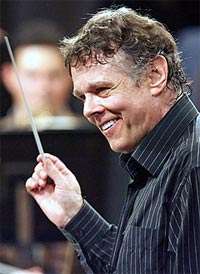 Like Karajan, when he combined a dual role in Berlin and Vienna, Mariss Jansons now seems to bestride today’s European musical scene, simultaneously encompassing directorships of two major orchestras – in Munich and Amsterdam. Whatever reservations one may have had about Karajan, there can be little doubt that he performed a huge repertoire, both symphonic and operatic, with enormous distinction. By contrast, in common with several major conducting names of today, Jansons’s range is comparatively restricted. But, even allowing for this, on this occasion he made heavy weather of two works that might be thought central to his repertoire.

This was unashamedly big-band Haydn. There is nothing intrinsically wrong with this approach. Indeed one suspects the composer would have loved hearing what is arguably his grandest symphony performed by an orchestra of around 50 players. On the face of it this was a performance that made all the right noises: antiphonal violins, repeats observed in both outer movements and, once past the Introduction, hard sticks used with the timpani.

However the results were curiously anachronistic; all-important wind parts were frequently all but submerged in the curtain of string sound, the Trio had its expression laid on with a trowel at a much slower tempo than the surrounding Minuet and there was a recurring reluctance to take Haydn’s sf markings on trust: the result being that their shock value was constantly blunted. The Minuet and finale came off best, probably because both movements are relatively tamper-proof, the former striding forward manfully at a real Allegro and the finale benefiting from some sprightly string-playing. Elsewhere though Jansons over-milked the music’s pauses and the Andante’s simple but affecting theme was manicured in so sophisticated a fashion that it might have been one of music’s profoundest utterances.

Even more disappointing was the Mahler. The current obsession with his music has become a very mixed blessing since every major conductor-orchestra combination now feels it necessary, whether or not they have any affinity with the music, to give us their Mahler. It is all a bit like mountaineers climbing Everest “because it is there”. On this occasion the work’s linked first two movements were all but wrecked by an absurdly over-dominant solo trumpet, the remainder of the orchestra virtually inaudible whenever he was playing, even in the opening movement’s lamenting Leidenschaftlich outbursts. The Funeral March’s alternating sections limped along, robbed of their sinister underlying Schwung by Jansons’s persistent micro-management of the string line, and yet really important dynamics such as the final sf pizzicato with which Mahler guillotines the movement were simply ignored. The second movement, marked “with greatest vehemence”, opened promisingly enough but both it and the succeeding Scherzo-Burleske quickly ran into the sand.

Mahler’s very pre-eminence as a conductor led him to specify in great detail what he wanted so his scores are littered with a multiplicity of instructions such as ‘calmer’, ‘don’t hurry’, ‘wild’, and so on. The real problems start when interpreters take these as invitations to halve or double the tempo, rather than as indications of the music’s essential character. This leads them deep into what can best be described as the Mahlerian thicket where movements with a multiplicity of such markings lose all sense of an underlying pulse. This is particularly damaging where Mahler asks for a sudden resumption of the original tempo, tempo 1 subito. Without a clearly established Tempo 1 there is obviously nothing to go back to. Despite much individually splendid playing, notably from the first horn and first trombone, these two inner movements fell apart for precisely this reason.

Rather better were the final two movements. At least the Bavarian’s string sound in the famous Adagietto was something altogether special and Jansons rightly sustained the ff across the last eight bars – all too often it is dissipated too soon so that the movement limps to its close – but it was an oddly literal account even if it avoided the mawkishness some interpreters bring to this music. Perhaps the really important thing here is to get an orchestra to lose sight of the bar-lines so that audience and orchestra alike are left hanging on each successive note. However there was some nicely detailed and characterful wind playing at the opening of the Rondo-Finale and, with fewer interpretative pitfalls to distract, one was better able to enjoy the actual sound of this splendid orchestra. However, having failed to establish the work’s trajectory from the tragedy of the Funeral March to the finale’s eventual exultation, the apotheosis when it finally arrived seemed oddly inconsequential.

The reshaping at the Festival Hall is causing some problems for orchestras who seat their basses to the right. Previously both edges of the stage were slightly angled out towards the audience whereas, now, with its more box-like shape, the basses point directly inwards towards the conductor; this further reduces the bass sound in what was already a bass-light hall and the problem is greatly compounded when, as here, the brass section points directly out at the audience, adding an unpleasant edge to the sound.