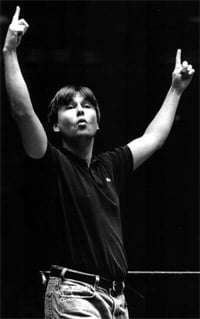 So the Los Angeles Philharmonic and out-going music director Esa-Pekka Salonen completed their Sibelius symphony cycle at the Barbican Hall, as part of the Great Performers season, with their only all-Sibelius programme. Where the previous three concerts had included a contemporary centrepiece, here Ben Heppner sang seven Sibelius songs as orchestrated specially for the project by John Estacio.

Bizarrely, there was no introduction to Canadian composer John Estacio in the programme book – just a couple of lines referring to his 2006 Canadian Broadcasting Corporation commission for Heppner.

In many ways, this was the most successful of the four programmes. I very much enjoyed Sibelius’s songs and Heppner’s singing of them. Perhaps curiously Estacio’s orchestrations seemed to be deliberately non-Sibelian and with the folk subject-matter of some of them they seemed rather closer to Mahler than perhaps either composer might have acknowledged! “Flickan kom ifrån sin älsklings mote” (The girl returned from meeting her lover) had exactly the sort of Grand Guignol basis (mother interrogates girl as to where she has got her red hands and red lips from, and eventually wants to know why she is, conversely, so pale – because her lover has been unfaithful) as many of Mahler’s “Des Knaben Wunderhorn” settings.

Completely at home with the songs – only the second (“Illale”) in Finnish, the rest in Sibelius’s own first language, Swedish – Ben Heppner was superb, making up for the all-too dreary Saariaho pieces that Karita Mattila had sung the previous evening.

If there was a disappointment in the final programme it was the performance of the Sixth Symphony. It’s the one I find most difficult and it seemed that Salonen was unsure of it, too, with none of the sure-footed trajectory he brought to his granite-hewn rendition of the Fifth Symphony.

In the latter, although quite malleable with tempos (the climactic peroration of the returning main theme in the finale, building up to the final, unevenly spaced tutti chords, taken much slower than expected), there was an iron grip to his conception that the orchestra followed to the letter. It was an awe-inspiring performance which ended the series on a high-note, with an intensity also carried over into the encore – ‘The Death of Melisande’ (from Sibelius’s incidental music’ – with searing string tone and eloquent playing all-round.

If the series as a whole was not an unqualified success, it was still a wonderful project. If I have a quibble, it’s the fact that of all composers, Sibelius’s symphonic trajectory has one goal – the one-movement synthesis that is his Seventh Symphony. Not to play them in order of composition dilutes this emotional and musical journey, but with Salonen shortly to take the reins at the Philharmonia Orchestra perhaps a future Sibelius cycle from him will follow the story from beginning to end.