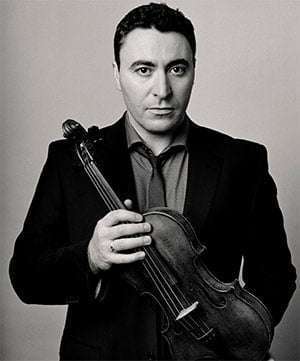 For the final concert in the Barbican Centre’s Artist Spotlight series, this time featuring Maxim Vengerov, the original plan was to have him direct the Triple Concerto from his violin. Fortunately wiser counsel prevailed and Andrew Litton was brought in to conduct, to the good, since he proved to be the anchorman of the performance, his watchful and sympathetic direction contributing much to its success. The three soloists, with Vengerov partnered by the greatly experienced Antonio Meneses and the rising star Igor Levit (who also played in the BBCSO’s Triple Concerto just a year ago), showed remarkable rapport, as if they were a long-established piano trio. All played with exceptional beauty, and if I single out the cellist it is because Beethoven frequently takes the player up to high positions on the A string, and Meneses met all the composer’s demands in this elevated register with immaculate intonation and tonal strength.

For the second half of the concert what might be described as an elevated table rest was placed to the left of the conductor’s rostrum. Vengerov entered, carrying his violin, its bow and a baton. He placed the three items on it, conducted the opening motif of Scheherazade with his hands, and then quickly took up the violin and turned to the audience to play – most beautifully – the first solo, with its harp accompaniment. Then the violin was returned to the rest and Vengerov turned round to again conduct the orchestra.

This sequence was followed throughout the performance, as and when the score demanded. Fortunately he didn’t attempt to conduct from the violin as such. He played and directed from memory, which was just as well, logistically. It was distracting performance to watch, and radio listeners were fortunate not to experience it. What it did bring home is the fact that violin solos comprise only a small part of the work. Vengerov is now an experienced conductor, and despite the comings and goings, he obtained high quality, disciplined playing from the BBCSO. Sometimes Scheherazade can be made to sound dull, but not so on this occasion. Strong rhythms and bold phrasing ensured a high level of communication, and the woodwind principals, especially clarinettist Richard Hosford, displayed a high level of artistry. So in the end, we heard a most satisfying performance.

Vengerov’s reputation ensured a full audience, but his admirers might have felt a little disappointed, for they heard far less of him than they would if he had played a full-length solo concerto.