The indisposition of Thomas Dausgaard saw Andrew Gourlay – winner of the 2010 Cadaqués International Conducting Competition and currently Assistant Conductor of the Hallé – take to the podium for this concert which opened with a UK premiere for New York-based composer Andrew Norman (born 1979). Unstuck (2008) proved to be a 10-minute ‘curtain-raiser’ whose visceral impact – redolent of figures as diverse as Varèse and Leonard Bernstein – is harnessed to a stealthy formal evolution as kept one guessing how it would all end. In the event Norman had supplied two ‘new’ endings, towards one of which the three cellos plotted their quizzical course. 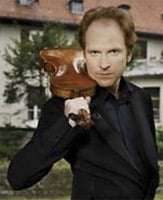 The rest of the evening focussed on standard twentieth-century repertoire. Not that Britten’s Violin Concerto (1939) was considered as such until relatively recently – when its intensely inward lyricism and thoughtfully applied virtuosity have placed it high among works from what was a golden era for violin concertos. Daniel Hope had the measure of the first movement’s rhapsodizing and incisiveness (the pizzicato accompaniment with the return of the main theme notably secure), and if the scherzo’s central section was a little rushed, the haunting transition back to the initial music – with its evocative interplay of piccolos and tuba – was perfectly poised. After an impetuous if not flawless cadenza, the finale unfolded its passacaglia ground-plan with no mean strength of purpose – Gourlay at one with Hope in his bringing out the capricious qualities of its central variations through to a powerful climax and coda which fused supplication and resignation to poignant effect.

A convincing performance overall, then, to which the only proviso might be the intrinsic qualities of Hope’s playing: not that his technique is at fault, but there remains something about his sound that detracts from the conviction of his music-making. This is, of course, a subjective response and others no doubt feel differently. 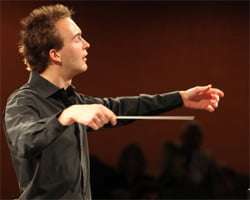 On to Shostakovich, and an account of the Tenth Symphony (1953) that was something akin to a tale of two halves. Gourlay’s tempo for the opening movement seemed a fraction too slow, yet he picked up momentum convincingly as the sombre first theme reaches its initial climax then, after the second theme had been given with just the right degree of ‘edgy lilt’, handled the central culmination – in which the development passes into the reprise at the point of maximum intensity – with real assurance, as also the ruminative recollection of earlier ideas on the way to a stricken but never somnolent coda. After which, the second movement unleashed its anger at an unflagging pace that never obscured the contrapuntal dexterity which simmers just beneath the febrile surface. Whether or not a ‘portrait’ of the recently departed Stalin, it still finds Shostakovich at his most emotionally uninhibited and Gourlay spared nothing in giving this unremittingly violent music its head.

After which, however, the performance faltered notably. While he rightly tackled the third movement as an extended intermezzo than a slow movement per se, Gourlay seemed too anxious to push the music forward – allowing insufficient space for the central section, with its spectral horn-calls and orchestral responses that find this composer at his most subtle tonally, and with a coda that was self-effacing rather than inscrutable. The ruminative Andante introduction to the finale was well handled, save for some overloud oboe playing, then the Allegro moved purposefully from animation to aggression, but the recall of the opening material was too hasty and the peroration – marred by fallible side-drumming and spurious cymbal clashes – was brazen rather than defiant. Working in the Barbican Hall for perhaps the first time cannot be easy, but Gourlay needed to exert greater control over orchestral dynamics so the interpretative virtues of his performance come through.