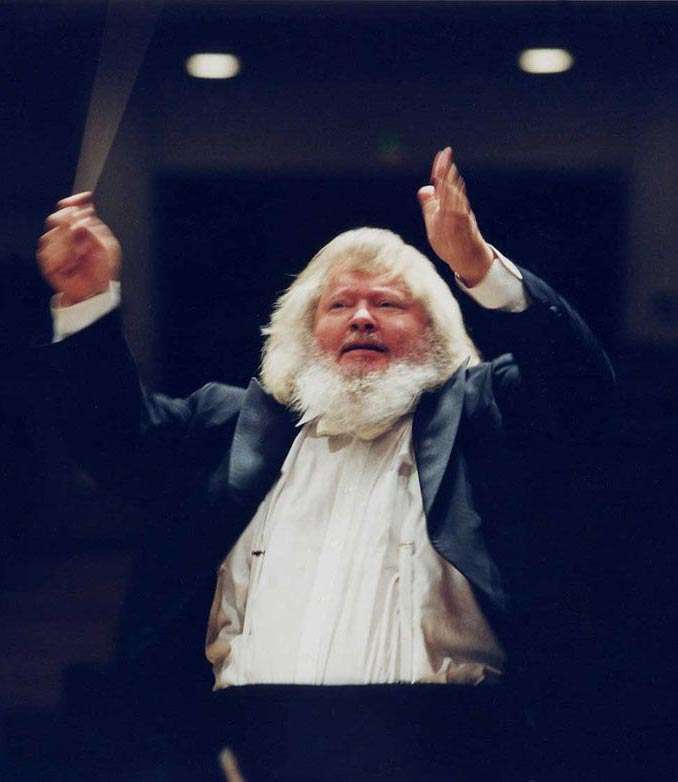 Before the main event, the BBC Singers, James O’Donnell and Stephen Farr gave themselves a thorough Protestant work-out with a recital in St Giles Cripplegate to balance Bruckner’s Catholic ardour later in the evening – work by Kantors of Leipzig’s Thomaskirche, where J. S. Bach also held office. The programme of devotional music by Calvisius, Schelle, Schein, Kuhnau, Harrer and Bach himself moved from late Renaissance (Sethus Calvisius) to last-gasp High Baroque (Johann Gottlob Harrer, who succeeded Bach in the post). Standing out among all the learned counterpoint was a lovely antiphonal Motet by Johann Schein ‘Alleluia! Wohl dem, der den Herren fürchtet’ and Holy Week music by Johann Kuhnau, his ‘Tristis est anima mea’ of potent chromaticism, with a couple of Bach’s Chorale Preludes played by Stephen Farr on the Mander organ situated in the north aisle. The quiet sobriety of the music was matched by the homogeneity of the BBC Singers’ performances and reminded you, in the later concert, how Bruckner’s Motets hark back to an intensity that is very much up the Renaissance’s street.

Moving to the Barbican Hall, it’s extraordinary how, in the three-minute ‘Ave Maria’, Bruckner satisfyingly builds up to the sanctification of Mary, and in all four of the Motets chosen here you hear the process of crisis and resolution that occupied the composer throughout his life, all performed with just a lick of verismo Catholic urgency. Urgency wasn’t much on the agenda in Bach’s mighty ‘Jesu. meine Freude’, a choral miracle of contrapuntal imagination to put next to, say, his Goldberg Variations and just as potentially full of drama. There was, though, attention to line, colour and dynamics that we’d later – in a concert nearly three hours long, it felt like much later – be craving in Bruckner’s Eighth.

The 70-year-old composer-conductor Leif Segerstam – a totemic Finnish cultural colossus with a list of Symphonies (285, so far) as long as his beard – is, on this evidence, not a Bruckner natural. (He was replacing Semyon Bychkov, who withdrew a few weeks ago.) The problem for me was his way with dynamics, or rather his preference for a default mezzo-forte. Volume levels between sections were ironed out, fortissimos sounded forced and exaggerated, resulting in some very pressured and ugly sounds from brass and woodwind. The important link passages had level pegging with the main material, which meant that those points of treading water, where pulse takes over from tempo and symphonic argument is put on hold, didn’t get their due.

This in turn suggested – oddly, I’d have thought, for a veteran Sibelius conductor – that Segerstam doesn’t have a feel for the long-term pace in Bruckner that works independently of tempo and which generates the illusion of space and slowness. Segerstam was just slow. And so the game of consequences went on, robbing the first movement of its crucial volatility (which for some people was anyway dissipated in the ‘usual’ Nowak edition, the one used here) and making a big thing of eruptive entries, hectoring contrasts and over-lit colours, all to emphasise, I suppose, Segerstam’s elemental overview, whatever the cost. It also reiterated the prejudice that Bruckner was at best an organist-orchestrator, which is simply not the case.

His hefty, variably energised rigour in the Scherzo was much in the same idiom, but there was a lovely sense of Mahlerian retreat in the Trio, replete with otherworldly arpeggios from three harps. Then Segerstam took the tempo right down in the Adagio, bringing it in at an incredible 34 minutes. That he was able to do so without breaking the movement’s back was primarily down to the BBCSO strings, who played with a breadth and warmth that for a while reeled me in to Bruckner’s chaste passion and supported the grave beauties from the brass and woodwind. Among many insights, two things stood out – the echo of Bruckner’s ticking clock that brought the first movement limping to a close, and a powerful sense of the music, after the epic failure of the penultimate climax, hesitantly regrouping to move away from crisis to a resolution of longed-for transcendence.

It was a mistake to look at my watch at this point – oh well, about another 20 minutes to go. Er, no. The finale was also similarly elongated (31), Segerstam taking the direction Nicht zu schnell to heart. Still, the deliberate tempo had its benefits. Apart from a grotesquely exaggerated anticipation of the coda’s closing theme from three flutes, Segerstam geared the move towards the culmination with a sure sense of direction and integrated the various rotating ideas into a coherent whole. But it still sounded like a long haul.

It was an odd experience – unfortunately pre-empted by Petroc Trelawny’s spoken from-the-stage introduction for Radio 3 when he gave the “100-minute” game away (it was 102) – one to deter Bruckner fence-sitters, or to send diehard Brucknerians home sadder but wiser – or in the case of the man sitting quite near me to reduce him to a fury of booing. I’ve never seen anyone so angry. That’s Bruckner for you.