This studio concert at the BBC Symphony Orchestra’s home confirmed just how good an orchestra it really is, in a programme featuring a new instrument, the MIDI-harp.

Andrew Litton’s conducting was unfussy in Elgar’s Cockaigne, a performance that emphasised the lyrical qualities of this portrait of an idealised London. Initially easygoing in character, Litton’s view of the work was generously expansive without lacking motion and he drew excellent playing. There was huge vigour and life to the phrasing from strings and wind, and warmth of tone and subtlety of vibrato from the trumpets unlike anything normally heard from the brass sections of London’s orchestras. 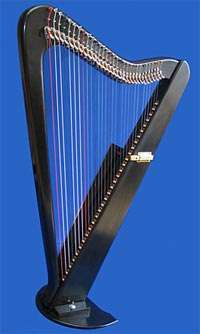 Sitting beside the conductor’s podium was a sleek black harp decorated with white trim and connected by a river of wires to a mixing desk. This instrument is a MIDI-harp, a dual-purpose instrument designed by Camac Harps and Jakez François. Useable both as an electronically amplified harp and as a MIDI device, it was latter element that has been utilised by Graham Fitkin for No Doubt, the first concerto written for the instrument. As Fitkin observes, the possibilities of this MIDI instrument are literally endless; any sound conceivable could be programmed and triggered by the harp’s strings. Fitkin wisely chose to home-in on one particular kind of sound, human speech. Archive clips relating to the start of the Iraq War were selected to construct this 15-minute concerto, an explicitly political piece concerning the WMD claims which triggered the conflict. Rumsfeld and Bush are heard in fragmented sound-bites, such as “There is no doubt” and “We know”, layered over music of a brooding and building tension that leads eventually to an extended extract of an unnamed speaker rubbishing the claims of Iraq’s military potential. The effects of the Iraq War are, of course, still with us. But it also feels like old news. The events directly quoted are almost a decade behind us and the WMD claims have ceased to yield material for even the most-slow-witted of satirists. Fitkin’s music lends an air of portentous thriller-music to the documentary material, a kind of fantasy soundtrack to the movie those powerful men caught in the politics of WMD might have imagined they were playing out. There is, also, an interesting manipulation of the material: those bold quotations are carved up and looped many times, leaving them sounding irritated and curiously equivocal. There’s no doubt where Fitkin stands on the politics of the issue: he allows the voices of scepticism to play uninterrupted and he’s brave to incorporate such a strong political stance into his music, even if his position is hardly radical. Yet Fitkin seems barely to have scratched the surface of the instrument’s potential, played here by Sioned Williams, the BBCSO’s principal harpist, and who commissioned the concerto.

Fitkin had issued a light-hearted apology to those of us in the front rows for the amplified volume of his concerto, but in practice it was the bombast and bluster of Shostakovich’s Twelfth Symphony which launched the greater assault on the audience. Litton’s swift command and the vivid intensity of the playing produced straightforward excitement and pictorial immediacy which went some way towards papering over the cracks in this problematic work. This dutiful depiction of the 1917 Russian Revolution wasn’t well received in 1961 and it satisfies little today, seeming to be an unwelcome reminder of the official hack-work that Shostakovich was obliged to produce in the years after World War Two. The musical language might not be far from that of the Eleventh Symphony (concerning the 1905 Revolution), whose stock seems to rise with each passing year, but the Twelfth holds little of the awesome and ambivalent power of its predecessor and seems especially sunk by a ludicrously over-extended conclusion. The wind section were particularly good in the second movement, an Adagio entitled ‘Razliv’, the village where Lenin hid before the October Revolution; a bassoon solo impressed, as did a duet between flute and clarinet over a cushion of muted strings. A meaty string sound was matched by beautiful if powerful brass-playing. The Twelfth might come just about last in any league table of Shostakovich’s symphonies, but a performance as good as this was still a joy to hear.