Vladimir Jurowski continued the London Philharmonic Orchestra’s season with a further enterprising programme featuring Hungarian masters past and present, together with a major work by a Viennese composer-conductor whose antecedents in Mahler were directly though never slavishly apparent.

The emergence of Peter Eötvös as a composer of international stature has gradually become evident (and the BBC is devoting a “Total Immersion” day to his music at the Barbican Centre this May), with Shadows reaffirming his instrumental mastery as well as his tonal finesse. Nominally a double concerto, flute and clarinet are positioned at the front of antiphonal orchestral groups (spatially enhanced) in which woodwind and brass ‘shadow’ the soloists while strings provide a varied harmonic context. Proceeding with only minimal pause, its three movements take in an incisive dance, then a lyrical intermezzo and, after an intense build-up in the orchestra, an austerely eloquent dialogue for the two soloists whose accompaniment is ever more fragmentary. Vividly rendered by Sue Thomas and Nicholas Carpenter, it would be a pity were the highly specific platform arrangement to discourage future performances. 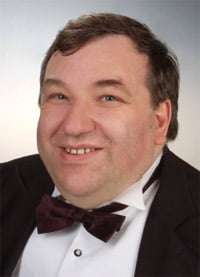 During the informal discussion as the platform was being reset, Jurowski spoke of his intention that Liszt be as widely heard in the bicentenary of his birth as Mahler in the centenary of his death. From an orchestral perspective, the sheer disparity in performance makes even a modest redressing of the balance the more necessary and though the Second Piano Concerto may not be unduly neglected, its combining formal ingenuity with meaningful display cannot be gainsaid. Unlike the four-movements-in-one of its predecessor, this work alternates between repose and activity in a process of continual thematic transformation – something which Alexander Markovich conveyed in an account as alive to the music’s scintillating brilliance as to its ruminative introspection (notably the rhapsodic duet with cello, meltingly played by Kristina Blaumane), with Jurowski ensuring a keen formal focus throughout. Not that Markovich was unwilling to indulge demonstrative passages such as that which sees the work through to its effervescent close, while the concerto’s very succinctness provided the opportunity for an encore in the guise of Markovich’s uproarious paraphrase on Waldteufel’s waltz Les Patineurs.

Although hardly the forgotten figure of three decades ago, Alexander Zemlinsky remains an elusive figure in that his music owes its individuality to a stylistic synthesis as unforced as it is potent, “Lyric Symphony” being a prime instance: the presence of Mahler’s “Das Lied von der Erde” could not have been otherwise in a ‘song-symphony’ by one who had enjoyed a close association with the older composer during his Viennese heyday, but the follow-through of individual songs and the intricacy of orchestration are very different. On which point, it was an astute move by Jurowski to position the double basses behind the brass at the rear of the platform, so ensuring an overall depth of sound such as rarely overwhelmed the singers while allowing the orchestra its head in the often lengthy postludes where motivic elaboration is at the service of the music’s pathos and underlying fatalism.

It helped that the soloists were well matched in their fervent yet unbridgeable dialogue. Melanie Diener may not have the widest characterisation, but her lightness of touch in the capricious second song and vocal purity in the sensuously remote fourth song were as evident as her suppressed anguish in the sixth. Thomas Hampson may have lost much of his richness and warmth of tone, but his ability to point up the musical and linguistic sense of phrases remains as strong as ever. Hence the fusion of anguish and uncertainty in the first song, easeful contentment of the third and despairing outcry of the fifth, then the resigned acceptance of the seventh song. Unlike the much-adapted Chinese poets as favoured by Mahler, moreover, Zemlinsky sets the idiomatic German translations of Rabindranath Tagore so that their ruminations on togetherness and loss become central to his musical conception.

A fine account, then, of a work that grows in stature on each hearing and a candidate, perhaps, for release on the LPO’s label. At any rate, Jurowski’s advocacy of Zemlinsky is as heartening as that of Liszt, and one anticipates further performances of both composers over the coming year.