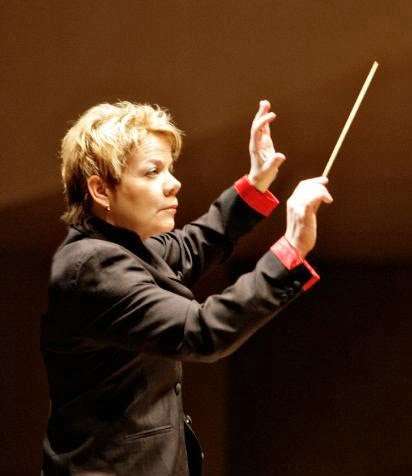 Marin Alsop was back with the BBC Symphony Orchestra for a concert led by two recent works by Judith Bingham and James MacMillan. Both composers are steeped in Christian liturgy and mysticism, and this was instantly apparent MacMillan’s Woman of the Apocalypse. The work is dedicated to Alsop and she conducted its premiere in 2012 at her Cabrillo Festival in California.

In her brief introduction from the podium, Alsop wryly observed that she was not the apocalyptic woman of the title, a figure who looms large in the Book of Revelation. Artists from Dürer and Rubens to the gaudy images by the Christian illustrator Pat Marvenko Smith have aspired to recreating this hallucinogenic enigma (usually assumed to be the Virgin Mary) who stands on a crescent moon, goes into battle with a seven-headed dragon, is given the wings of a great eagle and is crowned in Heaven.

As far as Christian mystics and any number of creative types are concerned, the Book of Revelation is a text that never stops giving, and MacMillan’s work is no less fevered and, well, apocalyptic than the artists and illustrators who have inspired him. He has supplied a guide to the five sections of this 30-minute tone poem/concerto for orchestra, which makes the progress from the shimmering luminosity of the opening to the thunderous climax of the Coronation fairly clear. On the way, MacMillan deploys his familiar juxtapositions of material, well-defined scoring, vast antiphonal dialogues, stalking bass-lines (the dragon, perhaps) and passages of seraphic yearning into a canvas of epic grandiloquence. 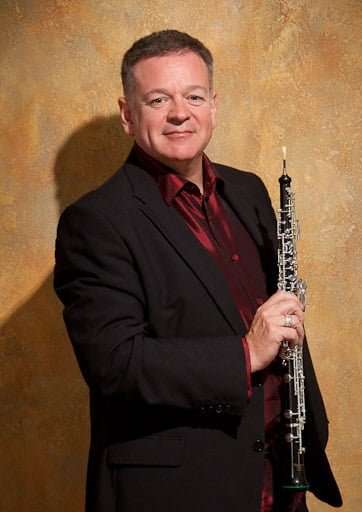 The brass-writing is fabulously grand, the huge percussion section isn’t too overpowering and the strings have a very English brand of ecstasy. With the forces at his disposal, MacMillan could easily have wandered into Messiaen-like spiritual glitter, but his Woman of the Apocalypse is northerner, with more than a nod to Wagner, Sibelius and Michael Tippett. Alsop had clearly rehearsed the BBCSO thoroughly, because it played with heroic confidence and panache and left us in no doubt that by the end the Virgin, to quote the Advent hymn, was robed in dreadful majesty. And panache is really what’s needed to make this delirious, baggy, ambitious slice of cosmic life succeed.

Continuing with the spiritual theme, Judith Bingham’s oboe concerto, The Angel of Mons, is scored for a medium-sized string orchestra. She has used the account of a British soldier’s vision of an angel that saved the day at the Battle of Mons in 1914. The modest forces drew attention away from the work’s ambition and eloquence. Nicholas Daniel played with enormous artistry and a marked sympathy for the ambiguous character of the solo part – an observer, involved but powerless, rather like Pierre Bezukhov in War and Peace. The mystical aspect of the work glows through Bingham’s balanced, chamber-textured writing, and the invention for oboe has an intensely vocal quality that springs from the quotations from the soldier that head each of the four short movements. At its first performance last year, The Angel of Mons had a string ensemble of only eleven players. This would have inevitably enhanced its intimacy and mystery, but what Alsop, the BBCSO strings and Daniel achieved, especially in the appearance of the angel, will stay with me for some time.

The quality of Alsop’s rapport with the BBCSO was there for all to hear in their open-hearted performance of Tchaikovsky’s Fifth. Alsop strode into the theatrical climaxes with considerable swagger, under her guidance the various guises of the motto theme left you in no doubt as to the optimistic character of the work, the horn solo in the slow movement was completely seductive, and Alsop’s control of weight and tempo in the closing pages of the finale assured this account’s impact.

The evening’s substantial immersion in Bingham and MacMillan had begun with the Singers at Six recital across the Barbican lake in St Giles’s. Bingham was for many years a member of the BBC Singers, and her insider knowledge of vocal style and balance was revealed to great effect in the biggest of her works in the programme, Missa Brevis ‘Videntes stellam’, which had its premiere in Sweden at Epiphany last year. Her hypnotic vocal lines instantly connect with the text, and she is an accomplished creator of stillness. The organ part included an accompaniment to the Epiphany Gospel reading and there was also a lovely motet based on the journey of the Magi.

Bingham’s style is as discernible as MacMillan’s. The discretion of his Màiri, for 16 solo voices, was in marked contrast to the Woman of the Apocalypse, with extremes of vocal demands, layers of sound covering and revealing fragile solo lines, and the power of suggestion guided this Gaelic vision of the Virgin Mary with self-effacing subtlety; the BBC Singers’ virtuosity and sensitivity jostled for supremacy.