On this palindromic date – 11022011 – it was Sibelius’s music that offered a surround (if not a mirror image) to a spellbinding piece by Detlev Glanert. This was no unthinking juxtaposition, for Glanert (born 1960) is a huge admirer of the Finnish master. This was a good night in London for Sibelians – there was a concert devoted to his music at St John’s Smith Square (also reviewed by Classical Source); and, looking ahead, the BBC Symphony Orchestra has announced a Sibelius Symphony Cycle during its 2011-12 Barbican Hall season with various guest-conductors.

David Robertson opened this current BBCSO concert with Sibelius’s final major statement, Tapiola (1926). Ostensibly a symphonic poem inspired by Tapio, the Finnish god of the forests (the score headed by vivid prose, not least “Ancient, mysterious, brooding savage dreams”), Tapiola can also be perceived as a symphony-manqué. What is certain is that however descriptive Sibelius intended his music to be, there is also a rigorously organised structure that underpins the whole. It was the latter aspect that Robertson emphasised, arguably at the expense of the music’s strangeness. This was not the chilliest or most-elemental account, but it was lucid and appropriately lean-sounding, which aided timbre contrasts, as well as being precisely played and conscious of dynamics. At the performance’s core was a rational sense of growth that progressed the score to its greatest eruption and then to a magically distilled and glowing stillness.

Even finer was Robertson’s conducting of the Fifth Symphony (as revised) – once again compelling (Robertson led a memorable account of it at the BBC Proms in 2002). He really does have the measure of its entire span, something emphasised by him observing the attacca directions that are marked in the score but rarely heeded; the one between the surging and loud-ending first movement and the delicately-opening second being the surprise element but completely convincing when as well-timed and as ‘understood’ as here (and something that could so easily be sabotaged by anyone interrupting with between-movement applause; not on this occasion though, thankfully). This is a symphony of transformation, which was thrillingly evident here, everything belonging and made inevitable – the first movement’s upheaval and the out-the-other-side appearance of the scherzo, for example. The middle movement has rarely seemed so poised and constructively contrasted, and the momentum and liberation of the finale was exhilarating (with superbly graded brass-playing to signal the mountain-climbing coda. The dynamic range was wide, some wintry pianissimos (towards pppp), in the symphony and in Tapiola, being especially frisson-making. (Next season’s BBCSO Sibelius 5 is conducted by John Storgårds.) 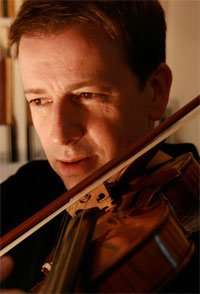 Given that Detlev Glanert’s consistently impressive pieces have graced London concerts for many years, his status increasing with the appearance of each one, it’s surprising that the 22-minute Music for Violin and Orchestra (a title previously used by Lorin Maazel) has taken fifteen years to receive its UK premiere. It was worth waiting for though. At Glanert’s request, Stephen Bryant (co-leader of the BBC Symphony Orchestra) played the solo violin part, and he did so with dedication, involvement, warmth of tone and character. This is modern-romantic music, a dreamscape, ruminative (if on the edge of nightmare). Stylistically, Berg is in the background and something more is owed to Hans Werner Henze and, maybe, Karl Amadeus Hartmann. Glanert’s unobtrusive mastery of suggestion and structure (the central cadenza is integrated rather than showy) also intimates Sibelius. This lyrical and expressive music, which is divided into three sections playing continuously (‘Cantus’-‘Spiramen’- ‘Passus’; Song-Breath-Paragraph) calls not so much for a large orchestra (although it is) but a diversely etched ensemble, including piano and harp, and an extensive percussion section (not least gongs and thunder-sheets) that is used for colour and with economy, which Glanert exploits for an engrossing and variegated soundworld. This immaculately prepared performance clearly delighted the composer.