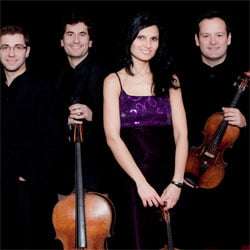 THE great Beethoven interpreter Adolf Busch advocated placing an Opus 18 string quartet at the centre of a programme and starting with a more ‘difficult’ work, when players and audience were fresh. As I arrived at the Wigmore Hall, I thought I was in for a Busch-style sequence, with the ‘Harp’ coming first. But no… one of the house staff appeared to say that the evening would start with the D major and end, not with the advertised Grosse Fuge, but with the substitute finale to Opus 130. The Fugue will be played next June, as this Belcea Beethoven cycle winds to a close – by then the players will have given the series in five other countries.

As a ‘starter for ten’ this initial instalment racked up a score of about eight, with only one movement out of fourteen proving a real disappointment. The Belcea’s internal balance was greatly improved over the last time I heard it, in June, and the playing was unfailingly alert. We think of the Belcea as ‘one of ours’ but now that Laura Samuel has departed, no British player is involved and four countries are represented. It is one of the miracles of music that musicians from different backgrounds can match each other so well.

The D major, probably the first string quartet Beethoven wrote, went really well. The phrasing in the Andante con moto was lovely. Perhaps with an eye to a long evening ahead, repeats were in short supply. (I hope the Belcea will consider playing the minuets or scherzos of the Opus 18 set twice after the trios. I have never understood the convention of repeating them before but not after; and in the Minuet of the C minor work of Opus 18, after the trio Beethoven asks for a faster tempo “the second time”, proof that he wanted it played twice. Had he simply wanted it played faster after the trio – something that sounds nonsensical when you hear it done – he would have written da capo, più Allegro.)

Meanwhile, back at the Wigmore, the ‘Harp’ was beautifully played for the most part – I was not entirely convinced that every pizzicato was in place in the first movement, but the Adagio was beautifully phrased, with first violin and cello in perfect accord, the scherzo was furiously vigorous and the final variations were splendid, especially the viola’s variation.

Opus 130 started well, with firm intent, and although the Presto second movement went more like a hurricane than a wind, it was pretty niftily done, with a light touch. The Andante con moto had the flair that characterises the Belcea’s Beethoven; and the ‘German Dance’ was delightfully accented without being overdone. I do wish the players had dared a slower tempo for the ‘Cavatina’: it was nicely played but ‘niceness’ is not enough in this sublime movement. The central section, which ought to strike terror into the heart, went for nothing. Beethoven would never have been moved to tears by this performance. Some amends were made by the finale, which was a trifle finicky in places – it would also have gained by a fractionally slower tempo – but had welcome weight at the climaxes. By now a certain amount of fatigue had set in, but the players kept going gamely.

As an unnecessary but much appreciated encore, they played part of Thomas Adès’s Arcadiana with exactly the rapt concentration and intensity that the musicians should have brought to the ‘Cavatina’. So they can do it… Now they need to raise their interpretations of the other ‘late’ quartets. I have in mind the Vanbrugh Quartet’s survey in Cadogan Hall earlier this year.