Tallis
Spem in alium
Mahler
Symphony No.8 in E-flat

The best-made plans … mine was to be at home on this day with a various-things-to-do tinkering agenda. Then, fairly last-minute, a friend offered me a ticket to see The Glass Menagerie (fine, a matinee, and I’d only be out for a few hours). However, fate running the show, the designated reviewer for this LPO concert phoned to advise illness (okay, as I am in London – now – and the Duke of York’s Theatre is a stone’s throw from the RFH, I’ll do the Mahler as well…). My day was meant to lead into the Detroit Symphony’s live Mahler 10 webcast (for UK viewers, at 1 o’clock in the morning). Menagerie, Mahler, Mahler…

So with Tennessee Williams’s play behind me, and buoyed by some tasty sustenance, the buck-stops-here place to be was the Royal Festival Hall. Mahler baulked at first-performance publicity terming his latest Symphony as being “… of a Thousand” but the Munich 1910 premiere, which Mahler conducted, and a soon-after second, drew the crowds in for a huge success. This LPO presentation (apt word) fielded roughly seven-hundred personnel, the Orchestra swelled by organ, three harps, celesta, two mandolin-players, harmonium, piano, a second timpanist (the recently retired Andrew Smith, for many years in the Philharmonia) and off-stage brass – if nothing that Mahler didn’t lust after in his extravagant score. The combined choruses were spread wing-like from the choir area to the stalls surrounds, thus limiting the number of punters, and there were quite a few empty seats, surprisingly given it was a sold-out event, so maybe some seat-holders simply didn’t turn out or return tickets.

Four of the vocal soloists had to be eleventh-hour replacements for ailing colleagues (including Sarah Connolly and Matthias Goerne as casualties), and we started with Spem in alium, by the circa composer, Thomas Tallis, born around 1505. Spem in alium is maybe from 1570 and its circumstances are little-known. What isn’t in doubt is that this forty-part Motet is a high-point of Renaissance a cappella polyphony, here shared by the Choir of Clare College and members of the London Philharmonic Choir, about one-hundred-and-twenty singers in six collectives, so three to a part, in half-surround-sound and high definition, wonderfully sung, creating wonderment, the music’s grandness and complexity genuflecting to one God … then Vladimir Jurowski plunged straight into Mahler 8, and with a burst of bright light, a stunning moment of sounds and visuals. There was no lack of lyrical imploring, and although flexible with tempos, Jurowski sought and found a cohesive view of ‘Veni, creator spiritus’, given with Solti-like drive. If the hard-working strings (sixty-plus) didn’t always reach the ear when all were performing (minus the soprano Mahler adds for the second part), and the cupped-hands boys’ voices lacked cutting edge, the whole was exhilarating, and the coda, broadening ideally, was ecstatic. 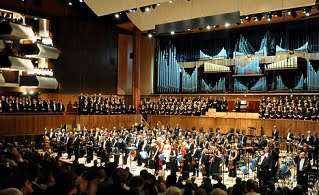 Then an interval (sigh!) … I’m saying nothing, save the chorus-members might disagree with my disquiet over an unwanted break, especially those who partook of the demanding Tallis as well. Anyway, once we’d reassembled, Jurowski’s conducting of Mahler’s setting of the Closing Scene of Goethe’s Faust was once again extraordinarily compelling. His pacing was totally convincing, transitions too, so nothing hung fire, and the singers and players pulled out all the stops, from the suspenseful and anguished orchestral introduction to the resounding roof-raising everyone-involved conclusion. Perspectives, which involved some manoeuvres for solo and choral singers, were well-judged, and the Scherzo-like passages were delightfully light and airy. There was an element of opera present rather than oratorio, Tristan came to mind, and while one might doubt the break between the Symphony’s two parts and the need for a lighting-design (dark, glaring, fading, spot, and with the organ’s pipes alternately doused mauve, pink and blue) – illuminated rather than illuminating – the music and this performance were glorious, and recorded for the LPO’s label, a very bankable prospect.