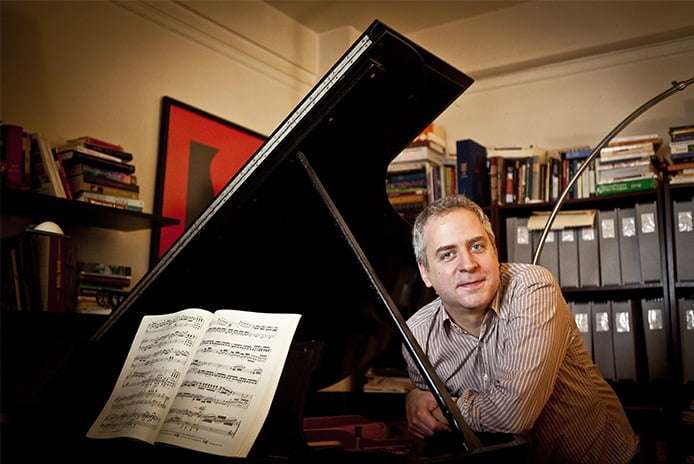 The dominating aspect of this Schumann and Fauré recital was the calibre of Jeremy Denk’s role at the piano, which declared itself decisively with Joshua Bell in the Frenchman’s A-major Violin Sonata. It was though they were continuing their dressing-room discussion, in music, such was the rapport – longstanding, it should be said – between these two players.

Performers of this wonderful, salon-busting work often put all their money on its grand, soaring opening to set the style of the first movement, but Denk was more circumspect, keeping back some of its rippling energy. Bell’s generous, long-breathed bow and a wiry, muscular tone did the rest in brilliance and passion, and he then veiled his style to let the Andante veer ever closer to dissolution, nudged in that direction with the utmost discretion by Denk. Sometimes you think that the music might tilt into César Franck’s rather self-conscious chromaticism, but Bell and Denk opened the door on Fauré’s unique elusiveness.

You probably wouldn’t say that Schumann and Fauré knock sparks off each other, but Schumann, for all the stature of his chamber music, has a different approach to his bigger scores. Apart from a few orchestral works (and the Requiem), Fauré’s substantial works are all chamber music, the best of them in the salon but not quite of it, with characteristically broad themes turning towards extremes of intimacy. Schumann’s brand of fantasy is also much more defined than Fauré’s, which sometimes seems marooned in its own ambiguity – and this recital caught the differences.

Schumann’s fantasy jumped out at you in an electrifying performance of the D-minor Piano Trio, in which Denk sometimes seemed to be vamping his way to the holy grail of spontaneous ensemble, with Bell and Steven Isserlis imposing a dialogue of violin brilliance and cello stealth, and all three flew with the energy of the Scherzo.

The freshness of the Trio continued into Isserlis’s duo with Denk in the Five Pieces in Folk Style, which succinctly give you the essence of Schumann’s expressive world. Denk was at his most imp-like in the first, Mit Humor, almost as though he was trying to get a rise out of Isserlis’s gut-stringed reactions, and his radiant tone worked wonders in the dreamer second Piece and an unexpectedly desolate account of the third. Isserlis has talked often of his love for Schumann’s music, and that made itself felt here without any contrivance.

Timothy Ridout joined for Fauré’s G-minor Piano Quartet, and he served the many viola passages with incredible and subtle beauty of tone. Denk steered things with a fine understanding of Fauré’s deference to classical form without being enslaved by it, and, as in the Sonata, shaped the music’s seamless momentum with great skill. All four players were intensely communicative in the limpid Adagio, an amazing union of light and grace, even by Fauré’s exalted standards.