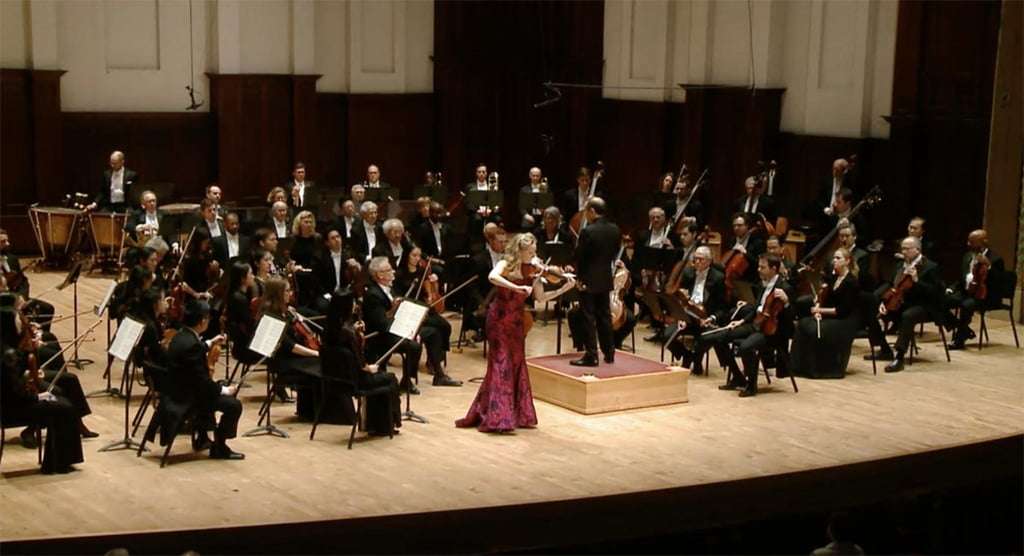 The Walk to the Paradise Garden comes between scenes V & VI of Frederick Delius’s Romeo and Juliet opera; and if the title and the music itself suggest otherworldly enchantment, the Paradise Garden is rather more earthly, it being the Village’s local hostelry. Mark Wigglesworth presided over a rather passive journey, a little uncertain at times, in a reduced-orchestra arrangement (Delius’s original scoring is lavish, including six horns, which can carry over into the interlude’s concert appearances); here the DSO fell-back on Sir Thomas Beecham’s slimmed-down version, and there is a recent one by David Lloyd-Jones. Sensitive playing, yes, but lacking for inner emotionalism and any sense of narrative.

Vaughan Williams 5 (which Andrew Davis conducted in Boston recently) might be heard as a pastoral and yet visionary (looking to peace) response to World War Two, raging at the time: the composer introduced the work during the 1943 Proms season. Musically, it shares motifs with his Bunyan-inspired The Pilgrims Progress, the “morality” opera which at that point VW thought he would never finish; but he did, first-performed in 1951 at Covent Garden. Wigglesworth appreciated the spaciousness and majesty of the Symphony, the outer movements (respectively ‘Preludio’ and ‘Passacaglia’) glowed somewhat mystically, the first generously expansive if becoming precipitate towards the climax, the Finale pushed along too much, if ending serenely, whereas the second-movement Scherzo danced lightly although a little less harry would have been beneficial to its galumphing demeanour, and the ‘Romanze’ (“The House Beautiful” in the stage-work) was transporting if rather self-consciously moulded, and, as elsewhere, if not always granted the sense of organic growth and innate touches this wonderful music needs and thrives on.

Centrepiece, it was Simone Lamsma in Sibelius. The Dutch violinist was in top form technically, and was musically confidential, intensely fiery, and imperious, if unremitting with the pressure, although there was some light and shade, but the DSO – as broadcast (an important factor) – was backwardly placed and uninspired, dull, reined-in, and the slow movement was interpretatively indulged to the point of stasis, making the clapping that resulted even more incongruous than it might have been, which Wigglesworth conducted into, setting a suitably measured tempo for the Finale and releasing its perky rhythms.

As an encore, Lamsma stole the concert with Hindemith, the Finale of one of his Sonatas for Solo Violin – but she didn’t say which of them, there are three – a superb piece though, quite Baroque-like in its bevy of notes and ornamentation, and fast, and given fabulous execution.