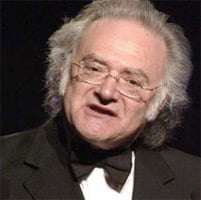 A regular feature of the London Philharmonic Orchestra’s seasons for over a decade (what used to be called “Silver Screen Classics”), this performance repeated a showing of the extraordinary 1925 silent film of “Ben-Hur”, complete with Carl Davis conducting his score for it. Having missed the LPO presentation years ago, I went up to Manchester to see Davis conduct the Hallé in his magnificent score, some two-and-a-half hours long. I hope that this London repeat was not bringing things full-circle and an unannounced (‘silent’ if you will) ending to the series – but there is currently no sequel in the next LPO season.

By this you will guess that I am a fan. That’s an understatement. Whether Davis conducts original scores (Prokofiev’s for Eisenstein’s “Alexander Nevsky”, for example, and a number of Chaplin classics) or his own astonishing scores (to such films as “Old Heidelberg”, “Flesh and the Devil”, “Greed” with, perhaps most notably, Abel Gance’s “Napoleon” and, my favourite, Buster Keaton’s “The General”, with his “Old Hospitality” running it a very close second) these evenings are an indelible memory of evenings spent in the Royal Festival Hall, as are great orchestral performances by Böhm, Giulini, Haitink, Karajan, Muti and Tennstedt. 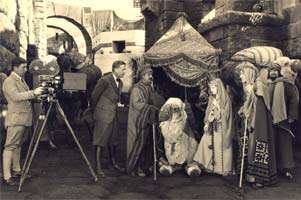 Indeed, as Kevin Brownlow – whose love of the silent era informed his 1980 TV series with David Gill, “Hollywood” (which Davis scored) that was the impetus for their company Photoplay Productions – said in a speech before one of the screenings, concert-halls are now the largest venues where films are shown. Seeing a great film in the company of over 2,000 people is something that cannot be replicated elsewhere. Add in the utter inventiveness of the silent-film-makers who, without CGI and speech, could amaze and entertain just as well as the more technology-driven industry nowadays, and – most importantly – the sound of a symphony orchestra make these events like no other.

On this occasion, Carl Davis had to wait longer than usual for the film to start, so he turned to the audience, eyebrows raised upward and commented “this is live!” But as soon as the opening credits rolled and the orchestra, “Parsifal”-like, intoned the ‘Dresden Amen’ to accompany the initial telling of Christ’s nativity, music and screen melded into one for the heroic tale of Christ contemporary, Judah Ben-Hur (Ramon Novarro), who falls foul of his boyhood Roman friend Messala (Francis X. Bushman) and is condemned to a life of slavery on the galleys where, in a battle with pirates, he saves the general and becomes his adopted son.

But, although becoming famous in Rome as a charioteer, he still wants to return to Jerusalem to find out what happened to his mother Tirzah (Kathleen Key) and his sister Iras (Carmel Myers). His trail leads to Antioch, where his family’s old slave Simonides (Nigel De Brulier) has used his masters’ wealth well (so well he’s become known as ‘the miser’). Not surprisingly Judah falls in love with his daughter Esther (May McAvoy), while by chance he also has the chance of revenge on Messala, by competing against him in a chariot race. 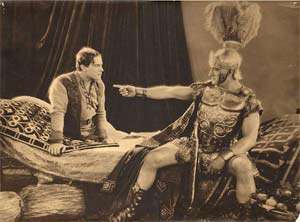 Meanwhile, one of the things the new Roman governor Pilate does is to release all prisoners with no known charges: these include Tirzah and Iras, suffering with leprosy. With a climax over the Passion, both Judah – who has vowed to aid the coming King of the Jews with legions – and his mother and sister meet Christ separately as he carries his cross. Judah is persuaded that fighting is not the way and, through Esther’s efforts, Tirzah and Iras are cured, with the family re-united.

Famous – in its filming of General Lew Wallace’s epic tale – in that Jesus’s full figure was not allowed to be seen, and for the extraordinary representation of Mary (Betty Bronson), whose rapt gaze instils beatific calm in all who see her, Fred Niblo’s “Ben-Hur” can certainly stand up high next to William Wyler’s 1959 colour remake; especially with Carl Davis’s thrilling score, with orchestrations by none other than Colin and David Matthews.

With a musical palette that revels in late-Romantic thematic transformations reminiscent of Mahler, Strauss and Korngold, with some glorious Ein Heldenleben-like battle cries for the extended chariot race (nearly quarter-of-an-hour – well, it took three months to film!), and there are some later influences to be heard too. Hungarian shimmering and bending harmony from somewhere post-Bartók and quasi-Ligeti accompany the blue-tinged dungeon and leper valley scenes, adding the aural equivalent to the darker turns of the story, especially as the triumph of the chariot race (that received – not for the first time surely – applause) is dissipated immediately by a return to the dungeon. There’s the influence from Nielsen’s ‘Inextinguishable’ Symphony, too, as the chariot race has opposing timpanists on either side of the screen, battling it out – one for Ben-Hur, the other for Messala.

Sometimes unintentionally funny in the poses the actors strike – it’s a style of acting that owed more to tableaux than modern styles – there is no doubt that 83 years later “Ben-Hur” still works, especially when enhanced by Davis’s incredible ear for detail and sheer melodic invention. That the London Philharmonic Orchestra rose to the occasion there is no question – even if organist Catherine Edwards could only be seen when taking her bow, as her place at the organ console was hidden behind the screen (with some of the organ pipes visible on the extremes of the back wall, the wooden doors, for once, open).

I end with two pleas: first, that there will be more meetings of the London Philharmonic and Carl Davis, bringing cinema to the Royal Festival Hall and that, second, Photoplay film restorations (in “Ben-Hur” including original colour sections) with Davis’s scores are released on DVD. Network, in its major Keaton anthology (7952414) includes Davis’s scores for “The General” and “Old Hospitality”, while Davis’s scores for Chaplin’s shorts are available on two BFI collections (BIFVD 605 & 606), but – as the LPO has proved over the last decade – there is so much more that could be available.