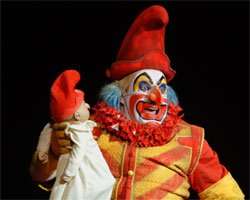 Two London productions of “Punch and Judy” within a month might seem to risk overkill, but this by English National Opera (second of its productions at the Young Vic, following on from Lost Highway) is markedly different from that by Music Theatre Wales in its conception and casting – and a work so rich in possibilities as Birtwistle’s first opera is worth experiencing from however many angles.

For this staging in the round, Daniel Kramer opts for a raised platform around the circumference of the performance space – on one side of which is a trunk out of which Punch produces his multifarious ‘tools of trade’, and outside of which are a sunken area to which the protagonists retreat after their demise as well as a tower from which Pretty Polly makes her appearances that function as turning points within the drama. This has the advantage of providing a firm yet not inflexible framework for events, while allowing for a dimension beyond which Punch can control proceedings and which itself comes to haunt him. The ensemble is placed to the right (from your reviewer’s perspective) and above the performance space, but there was never any risk of co-ordination going awry. Birtwistle’s original intention had been to have wind players interspersed with singers – something rarely, if ever, attempted and which would undoubtedly be fascinating to see realised. 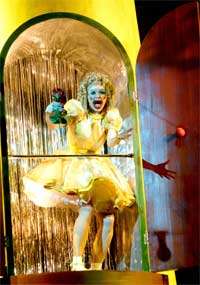 As to costumes, Giles Cadle has chosen designs that directly reflect the opera’s basis in puppetry and the commedia dell’arte, yet without resorting to the level of a historical exercise. Most significant is the way in which, as the drama reaches its denouement, the characters divest themselves of their stylised trappings to reveal ‘real’ people breaking out of their allotted roles: a process that suggests a dynamic use of ritual such as Birtwistle has deployed in his later stage-works, and which thereby draws the present piece closer to its successors than is usually the case. Peter Mumford draws on the Young Vic’s full range of lighting in images that are garish and speculative by turns, and with a spectacular drop-down of the overhead lighting in the confrontation between Punch and Jack Ketch; while Quinny Sacks makes equally extensive use of the performing arena in choreography that, if less aggressive than the famous Opera Factory production that put the work on the operatic map a quarter-century ago, certainly lacks nothing in energy or the physical interplay of characters. 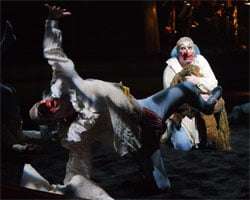 The cast is of a consistently high level. Andrew Shore not only sang, but also acted and thought his way into the role of Punch with an almost nonchalant ease; a psychotic figure whose overtly human side is yet allowed to surface in his wooing of Pretty Polly and in his near-disintegration of character having run out of antagonists to rid himself of. The manifestation of a sextet of Punches is a coup de théâtre that perhaps runs out of steam as the drama draws to its climax, but this hardly undermines Shore’s excellence in the part. Lucy Schaufer brings an eloquent restraint to Judy and an appropriate ominous quality to the Fortune Teller. Graham Clark and Graeme Broadbent are tellingly contrasted as the Lawyer and the Doctor (complementary roles that are here even more closely intertwined than usual), while Gillian Keith is unusually full-on as Pretty Polly (no fey whimsy here) and also a Witch of patent nastiness. Ashley Holland confidently projects Choregos as the master-of-ceremonies whose outwitting by Punch is almost repaid on his return as Jack Ketch – though he yields vocally to JeremyHuw Williams, whose assumption was the undoubted highlight of the Music Theatre Wales production.

Instrumentally, the ensemble drawn from the ENO Orchestra gives what must be surely be the most capable rendering yet of this music in a staged context. Textures are as tautly-strung as Birtwistle’s demands necessitate, but nothing has been left to chance in the technical finish of its contribution. Conducting a ‘contemporary’ opera for the first time in his tenure, Edward Gardner impresses with his grasp of its uncompromising idiom – reckless in comparison to the composer’s later stage-works (not least The Minotaur), perhaps, but the more exhilarating because of it. It sets the seal on a production that reaffirms the centrality of “Punch and Judy” to music-theatre of the latter twentieth-century: a work whose potential, both in its staging and in its example, is far from being exhausted.