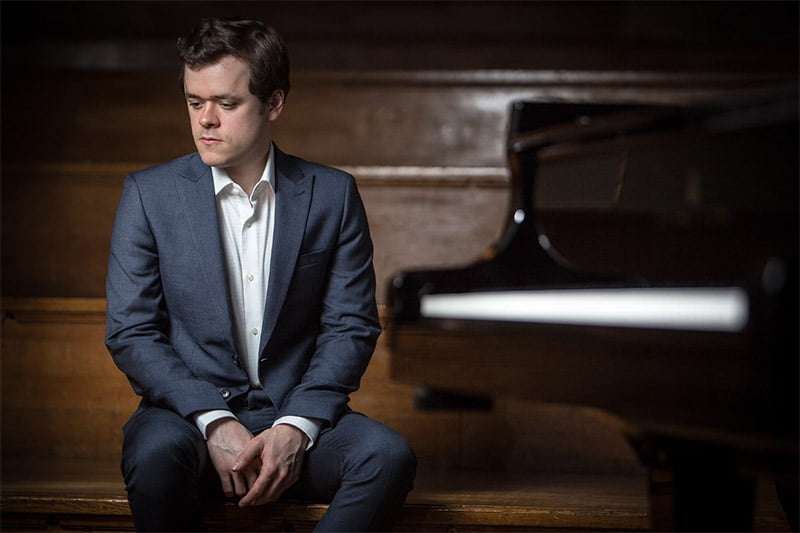 Benjamin Grosvenor seems to be surviving unscathed the rigours and weight of prize-winning, promotion and expectation, and he continues to consolidate his position as, aged twenty-five, one of the finest young pianists around. The first thing I noticed was his infinitely more relaxed and engaging stage presence. Then, as this multi-period recital of substantial works unfolded, it became clear that Grosvenor is also a natural when it comes to sustaining the vital, old-fashioned mystique of an artist who combines flair and stamina with a powerful intelligence and grounded imagination – a musician with a highly developed ability to connect and to interest.

He is also a terrific stylist. In Bach’s G-major French Suite, he kept fingers close to the keys for an admirable evenness of tone and touch, feathering-in the decorations of the ‘Sarabande’ and the mysterious ‘Loure’ with a silky, casual elegance. Moments of contrapuntal voice-leading were there for clarity rather than for attention-seeking, a few phrases were greased with a dab of pedal for grace and colour, and the spirit of the dance was a constant presence, admittedly more apotheosis-like in the speed and virtuosity of the ‘Courante’ and in his vertiginous account of the concluding ‘Gigue’.

Brahms’s late piano music can be so inward and melancholy that the pianist has his or her work cut out conveying its extremes of privacy in a concert hall. Grosvenor compounded this potential problem by alternating each of the Opus 119 Pieces with the three that make up Brett Dean’s Hommage à Brahms. Dean’s emotive titles – ‘Engelsflügel’ (Angel’s wing, for I & III) and ‘Hafenkneipenmusik’ (Harbour-bar music, presumably a reference to the young Brahms playing piano in a dodgy dockside dive in Hamburg to earn a bit of money) – had the effect of trying to fix Brahms’s mournful evasiveness into something more programmatic and, with Dean’s titles, visual. There is a distracted logic to Dean’s commentaries, especially in the obsessive, trapped workings of ‘Hafenkneipenmusik’, but Brahms decisively had the last word in Grosvenor’s magisterial account of the ‘Rhapsody’.

In his Wigmore Hall recital earlier this month, Igor Levit played Ronald Stevenson’s arrangement of the opening Adagio from Mahler 10, impressive in its way but hardly expanding our appreciation of it. By contrast, Leonard Borwick’s 1919 transcription of Debussy’s Prélude à l’après-midi d’un faune brilliantly reinvents it for piano, managing both to keep faith with the ground-breaking original without trying to emulate its orchestral form, and Grosvenor performed it with a poise and breadth that completely got the point of the music’s stature. It proved a neat way into Berg’s Sonata, which successfully hedges its bets between pan-expressive atonality and anchoring tonality while behaving formally with good classical manners. Grosvenor went to the heart of its expressionist, fractured lyricism with enormous authority and a limpid appraisal of its structure, so that it read like a book.

It really would have been enough for a full-length recital, but Grosvenor capped it with an incandescent account of Gaspard de la nuit. It was fascinating to see how, almost like a gymnast, Grosvenor aligns his shoulders to get the right purchase on the awkward opening of ‘Ondine’, here releasing a vapour-trail of phosphorescence, and he was equally stupendous in the same section’s later and sensational glissandos, when she reveals herself as a sprite with bite. After a chillingly beautiful vision of ‘Le gibet’, the gnome ‘Scarbo’ erupted in fury, gradually transitioning to a compelling grace and grandeur. Grosvenor’s playing, apart from his astounding technique, was directed with a vivid assurance of what can be achieved in Ravel’s pianistic blockbuster.

His encores, Liszt’s ‘Gnomenreigen’ (from Two Concert Studies) and Grieg’s ‘Erotik’ (from Book III, Opus 43, of his Lyric Pieces), loosened the spell. I just wonder where such disciplined, aristocratic self-possession will take this marvellous pianist.

The air-conditioning in the newly refurbished Queen Elizabeth Hall was cool verging on cold, and the lighting in the foyer is so dim you can’t read the programme. Is a point being made?