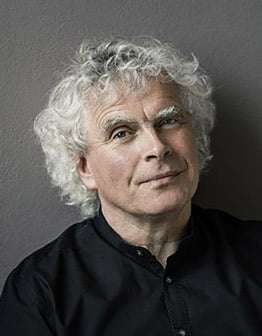 For the second time of asking in the Barbican Hall Simon Rattle led Mahler 9 – not the end of the LSO’s current Mahlerian story, for Lincoln Center beckons (May 4, 6 & 7, New Jersey on the fifth) featuring the composer’s final three Symphonies (links to the London airings below; NB the additional works are not being travelled).

Beforehand, Helen Grime’s Woven Space (given its premiere a week ago), music inspired by sculptures made from natural materials by Laura Ellen Bacon. Without access to what Grime saw (save a black-and-white photo of one of Bacon’s creations included in the programme), and how that impacted on her musical response, to the ears there is much to relish during the twenty-plus minutes scored for large orchestra. ‘Fanfares’ (heard previously at the start of the LSO’s current season) opens with a swoop from second violins (placed antiphonally to the firsts) and is energetic, purposeful, colourful, strident at times, and lyrical. The remaining movements don’t quite emulate such arresting invention (‘Fanfares’ being almost the equal of Grime’s outstanding Virga from ten years ago, music that so impressed Pierre Boulez when unveiled at an LSO workshop). ‘Woven Space’ (itself a structure by Bacon) is also the title of the mysterious and strangely beautiful second movement (suggesting, a purely personal reaction this, Britten’s operatic adaptation of Henry James’s The Turn of the Screw in terms of atmosphere rather than musical similarities), but it’s on the long side for the material, so when greater agitation arrives it is welcome if belated. The final section, ‘Course’, steps into Adès country, specifically Asyla, itself with significant Rattle resonance, and as engaging as it is, about two-thirds through there is something of a falling-away and then the music reaches a stop rather than finishing – or so a first listen suggests, although there was no doubting the excellence of this performance.

The Mahler was in many ways an exemplar of what Rattle (conducting from memory) and the LSO can achieve in terms of connection, commitment and accomplishment. If the first movement wasn’t quite an architectural triumph – it was too volatile for that, indulged/excitable, blazing/distant, confiding/raging – but it was bristling with detail, sometimes too searing or over-bright (as much the acoustic as musical choices) and full of lovely things, such as a prominent tolling harp, and when this spacious processional gelled it took on an incandescent quality, the envoi being sharing and sensitive music-making not least in distinguished solos.

The Ländler second movement enjoyed a humorous and rough-hewn approach, second violins really digging in, fluctuations underlined – brusque/slumbering – the music dancing all the while until it unravels itself at the end, here pointed with affection. For the ‘Rondo-Burleske’ Rattle mixed stoicism and stealth – not so much “defiant” (Sehr trotzig) as impersonal if biting (E-flat clarinet piercing through) but when the “extraordinary bittersweet episode” was reached Rattle kept the tempo related even though the music cries out to yield more and goose-bump us. Nevertheless the conclusion was a ride to the abyss and quite shocking in its emotional whiplash. Rattle left but a few seconds before starting the Adagio Finale – the definitive mood-changer – introducing a serene hymnal, slow-paced but not static, played with great intensity, music that will search chillingly and transfigure before a fading of the light and a thinning of textures to almost nothingness, ultimately silence – conductor and orchestra at their most concentrated and creating something unbearable in terms of ‘endgame’ tension, except of course Mahler planned a further Symphony and left enough of it for others to complete.