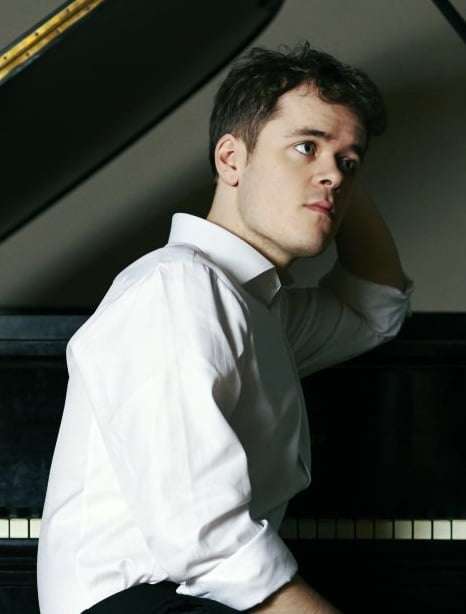 To open the new season of Southbank Centre’s International Piano Series, Benjamin Grosvenor cut a straight-backed and studious figure in a recital that displayed evidence of thoughtful planning.

Mozart’s Piano Sonatas can be viewed as a riposte to the dazzling technical wizardry of Clementi’s such works, which Mozart thought were no more than empty display. Clarity and simplicity are paramount, as well as an endless supply of melody. K333 is a prime example of this, with little that is extraneous. Grosvenor started the first movement with an almost balletic lightness and was playful and lively throughout if slightly too fast. The Andante cantabile with its balance of tenderness and solemnity was rather heavy, although there was great variety of articulation in the Finale, marked Allegretto grazioso, with its initial nonchalance leading to the drama of accents, silences and terse phrasing.

The Chopin opened in big-boned style as the brief introduction gave way to the propulsive doppio movimento. The differences between the exposition’s two subjects were clearly delineated. The Scherzo was particularly successful, given with great rhythmic urgency, whilst the melodic central section was treated as a delicate waltz. The ‘Funeral March’ may be over-familiar from state occasions and countless movies, from Citizen Kane onwards, but Grosvenor tried to give it freshness, powerfully delivering it with a clear pulse; this was solemnity built in strength before giving way to a gentle Trio, and then he caught the inscrutable nature of the whirlwind, epigrammatic Finale, taken at an unremitting and unvarying pace. However, for this pianist, this is a work in progress.

The Scriabin Sonata fascinates with its harmonic effects rather than a continuity of musical argument. Grosvenor teased out the opening fragments with dexterity and caught the hesitant mood of the music very well. The flickering figuration of the luxuriant main theme was beautifully rendered as was the transparent filigree. The contrasting second movement with its stormy agitation was delivered with crisp articulation and interpretative vitality.

Grosvenor has a soft spot for Enrique Granados’s music. He chose two items from Goyescas, which sets out to capture the spirit of the painter Goya and his era. ‘Los requiebros’ uses 18th-century popular song together with evocations of strummed guitars. Grosvenor made light of its formidable difficulty and added insouciance . He relished the outpouring of high spirits in ‘El Fandango de candil’, the triplets heavily emphasised.

Grosvenor saved the best until last. His account of Liszt’s Rhapsodie espagnole had shape and intensity. The composer creates a dazzling series of variations from an age-old Follia and a lithe Jota. Grosvenor gave the work structural unity and presented the central melody with great beauty. Pianistic demands were shrugged off; this was playing of clarity, characterisation and finesse. As an encore, Grosvenor offered a bright and brilliant Study from Moritz Moszkowski’s 15 Etudes de Virtuosité, Opus 72.