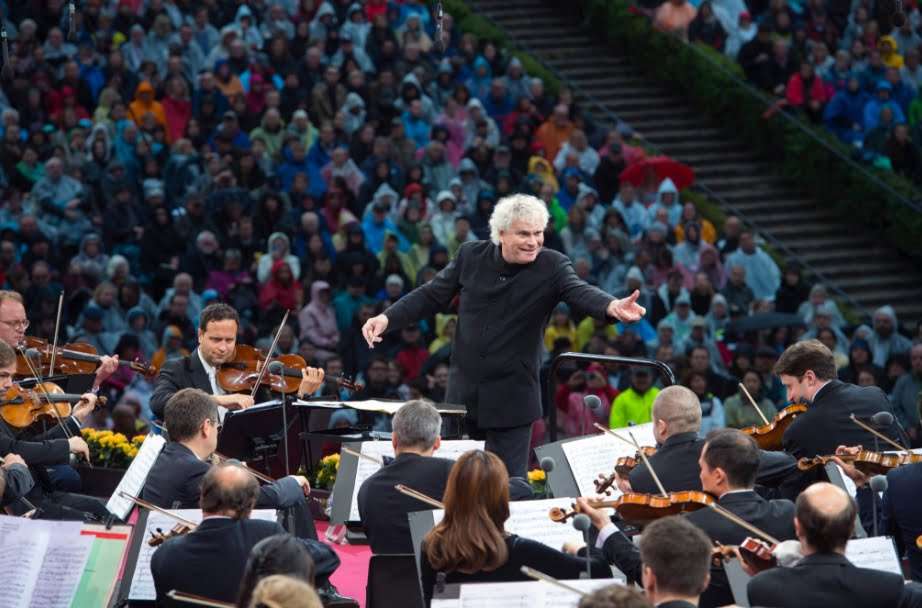 So, like Rick Blaine (Humphrey Bogart) in Casablanca, “I was misinformed”, the Mahler 6 a few nights ago wasn’t quite Simon Rattle’s farewell as chief conductor of the Berliner Philharmoniker, although it was his final Philharmonie concert in that capacity; it was this, a carnival-esque if rain-soaked knees-up from the Waldbühne (the orchestra under cover).

The Berlin Phil’s versatility and virtuosity was to the fore, relayed in excellent ‘indoors’-like sound, opening with an exuberant outing for George Gershwin’s Cuban Overture, trumpets and Latin-American percussion to the fore, incisive and swinging, and a seductive clarinet introducing the languorous middle section. Then the gentle curves of Fauré’s Pavane were followed by a selection of Joseph Canteloube’s Songs of the Auvergne, including of course ‘Baïlèro’, all finding Magdalena Kožená giving renditions of spirit, relish and sensitivity, wit and sparkle too, and with some distinguished contributions from orchestra soloists. 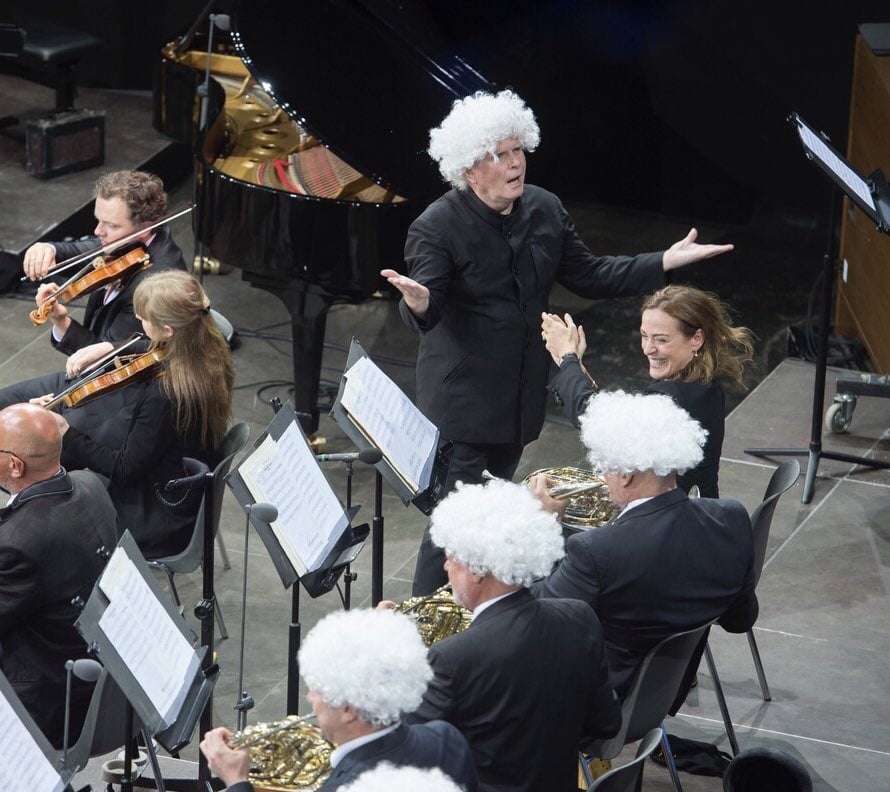 The interval, with no advice of its duration (it turned out to be the usual twenty minutes), was a single camera presenting the unremitting gloom of a large crowd not doing much, a few trooping off, presumably for refreshments, but it was curiously calming though and even quite exciting when the image did move a few inches to the left at one point while not losing sight of someone’s turquoise-coloured umbrella. It did become very tedious though. A flagged-up duration would have aided a trip to the kitchen for a cup of tea.

As a welcome return to music, the gaudy colours of a few movements from Khachaturian’s music for Gayaneh included a pointed ‘Sabre Dance’, some jaunty Kurds, an ‘Adagio’ featuring intense cello-playing and a lively ‘Lezginka’. Finally Pines of Rome, from exhilarating to crepuscular, then fragrant and balmy with once again a magical contribution on clarinet, although the recorded nightingale was on the loud side, not so enchanting, and finally the legionnaires from a bygone Roman era grew in presence and Technicolor as Respighi’s extra brass added to the sumptuousness. 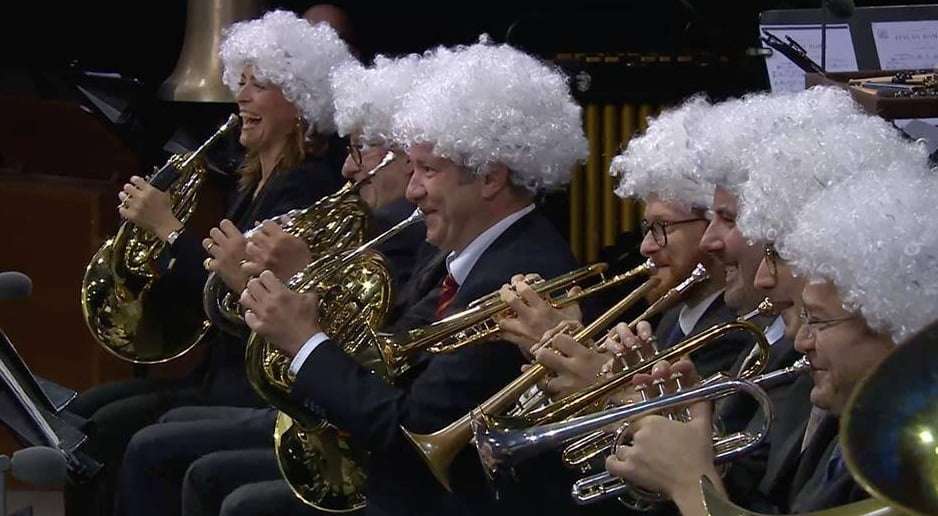 We weren’t done, for Lady Rattle returned for some lamenting Monteverdi, hubby at the harpsichord, an archlute and a few solo strings in attendance. Then, with the brass section donning Rattle-like hairpieces, coming to the aid of the party, it was Elgar’s Pomp and Circumstance March No.1 (that’s ruined the Proms), introduced by Sir Simon (in German) with reference to football and Brexit – it was clear from his body-language and tone of voice that he’s in the Remain camp (he should lobby 10 Downing St) – in a reading not so quick as quick can mean in this music, or as bloated in the “hope and glory” Trio as has been known (and no singalong). 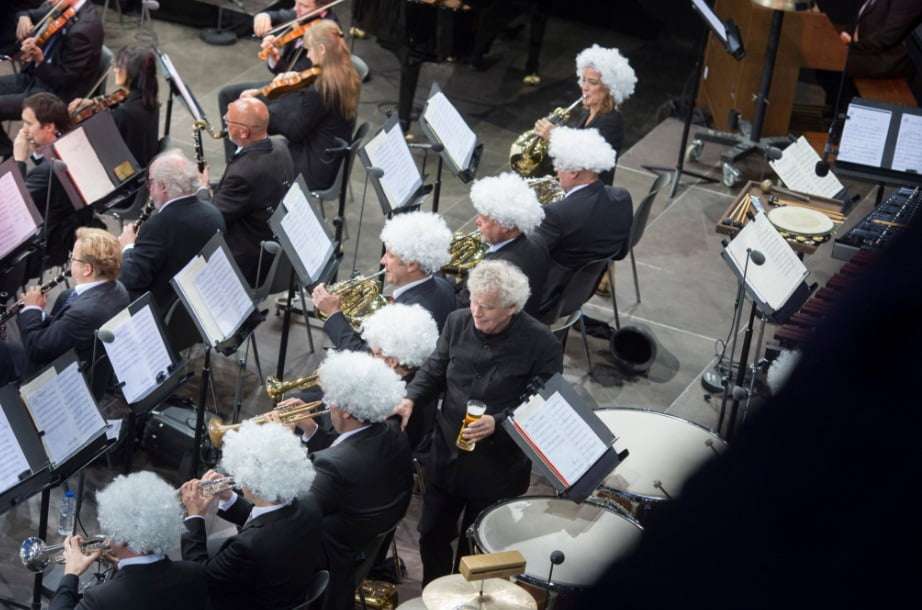 If in years to come a quiz question asks “what was the ultimate piece Simon Rattle conducted as chief of the Berlin Philharmonic?”, the answer is John Philip Sousa’s Liberty Bell (with its indelible associations to Monty Python), for although the Philharmoniker had another piece to play, the traditional exit march that concludes all Waldbühne concerts, Rattle didn’t lead it, for now armed with a glass of beer he walked through the orchestra exchanging pleasantries with various members and finished in the percussion section, his final musical act being to strike a cymbal – on time with the last chord. Next stop London, perhaps to see Mrs May, and certainly to be one-third of Stockhausen’s Gruppen.