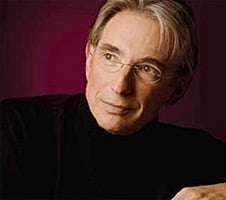 With this Gala Concert by Michael Tilson Thomas and the San Francisco Symphony, Carnegie Hall launched its 2008-2009 season as well as a three-month-long Leonard Bernstein festival which it is presenting in collaboration with the New York Philharmonic to commemorate the 90th-anniversary of the composer’s birth and the 50th-anniversary of his appointment as the Philharmonic‘s music director.

“Bernstein: The Best of All Possible Worlds” will encompass some fifty events through December 13, including concerts, musical theatre, film screenings and panel discussions at various New York City venues. As a protégé of Bernstein, an ardent proponent of his music and a gifted musical educator, Michael Tilson Thomas was an ideal choice to inaugurate the festival.

Tilson Thomas began this Bernstein programme with a scintillating performance of the Symphonic Dances from “West Side Story”. The orchestra’s playing was rhythmically precise (as were their finger-snaps and shouts of “Mambo!”), with the percussion, winds and brass – most notably the trumpets – shining with brilliant colours in the opening Prologue and the Latin-rhythm dances. The short, central Cha-Cha section, marked Andantino con grazia, and the ensuing Meeting Scene provided a relatively quiet transition from the raucous Mambo to the jazzy, fugal Cool. 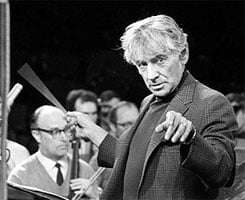 The strings sang out sweetly in Somewhere, and again as that thematic material was reprised at the work’s conclusion, with the winds adding pungent harmonies. This piece’s success lies largely in its not being a mere condensation of the “West Side Story” score, but rather a carefully scored orchestral work (by Sid Ramin and Irwin Kostal) drawing upon that musical source. Nevertheless, the dances evoke the clashing cultures of the Jets and Sharks, both at the school dance and in the Rumble that leads to the tragic Finale.

Before continuing, Tilson Thomas spoke briefly about Leonard Bernstein, noting that he took greatest pride in being a musician and being a liberal. He offered an illustration by the orchestra of the near-identity of the final notes of the “West Side Story” music they had just played and the opening notes of the prologue to “A Quiet Place” with which the programme would continue.

Dawn Upshaw and Thomas Hampson joined the orchestra in excerpts from Bernstein’s 1983 opera “A Quiet Place”, the sequel to “Trouble in Tahiti”, composed some thirty years earlier. Sam and Dinah were portrayed as newlyweds in the earlier opera, but in “A Quiet Place” Sam has come to Dinah’s funeral, encountering his dysfunctional family after a 20-year estrangement, and their reunion, in Tilson Thomas’s words, “makes Elektra seem like Rebecca of Sunnybrook Farm”. (The two operas are now generally performed as a single opera in three acts, in a re-arrangement by the composer and John Mauceri in which “Trouble in Tahiti” is presented in the form of flashbacks within the second act of “A Quiet Place”.)

The haunting, tension-filled orchestral prelude was followed by two arias from the opera’s first act. Sam’s angry diatribe, ‘You’re Late’, with its jarring rhythms, was sung convincingly by Hampson, and Upshaw, as Dede, the daughter of Sam and Dinah, showed off her wide vocal range in ‘Morning, Good Morning’.

The soft, lyrical strings that began the Act One postlude soon gave way to a passage featuring several woodwind solos and then to a loud, percussion-dominated section accompanied by string tremolos and a steady beat in the low brass. The mood suddenly quietened with a sustained note on the piccolo accompanied by celesta, from which a gentle theme emerged on the violins as strings, harp and celesta played along with concertmaster Alexander Barantschik’s solo, which culminated in a sustained harmonic note that faded away as gentle chords on winds and brass brought things to a close.

In the second half of the concert, which Tilson Thomas described as “the gala part”, the guest artists offered short selections of what was mostly lighter fare. First came Broadway star Christine Ebersole with a wonderfully jazzy rendition of ‘I Can Cook, Too’ from “On the Town”. Yo-Yo Ma then performed Meditation No.1 (arranged from “Mass”) with a deep richness of tone and a contemplative aura that was most affecting.

Continuing the alternation of levity and gravity, Upshaw sang ‘What a Movie’ from “Trouble in Tahiti”, in which Dinah gives an account of a terrible movie that she has seen as an afternoon escape from her unhappy married life with Sam. The film is rife with absurd plot twists, all of which Upshaw conveyed hilariously. This was followed by a very touching performance by Hampson of ‘To What You Said…’, with cello obbligato by Ma. This setting of an unpublished, autobiographical Walt Whitman poem is the most frequently performed part from “Songfest”, Bernstein’s cycle of twelve American poems composed for the nation’s bicentennial in 1976. Next on the programme was the bouncy Danzón variation from Bernstein’s ballet score, Fancy Free, with the orchestra’s wind and percussion players standing out brilliantly.

Five students from The Juilliard School – Gabriel Ebert, Carlton Ford, Paul LaRosa, Kelly Markgraf and Zack Villa – gave a rollicking and vocally outstanding rendition of ‘Gee, Officer Krupke’ from “West Side Story”, bouncing about the stage as they comedically portrayed society’s fruitless attempts to deal with juvenile delinquency. The student quintet then joined all of the other guest artists in ‘Ya Got Me’ from “On the Town”. Ebersole, Upshaw and Hampson each offered a verse, as did Tilson Thomas himself (in a very pleasant baritone) and even Ma’s arioso cello, with the audience contributing well-timed hand-clapping and refrain singing.

As entertaining as this concert was, and as much as I enjoyed hearing Bernstein’s music, there were enough melodic, harmonic and rhythmic similarities among the pieces to make me wonder whether three months of concentrated Bernstein might prove to be too much of a good thing.