Shostakovich
Lady Macbeth of Mtsensk – Opera in four Acts to a libretto by Alexander Preis & the composer based on the story by Nikolai Leskov [sung in English, after the translation by David Pountney] 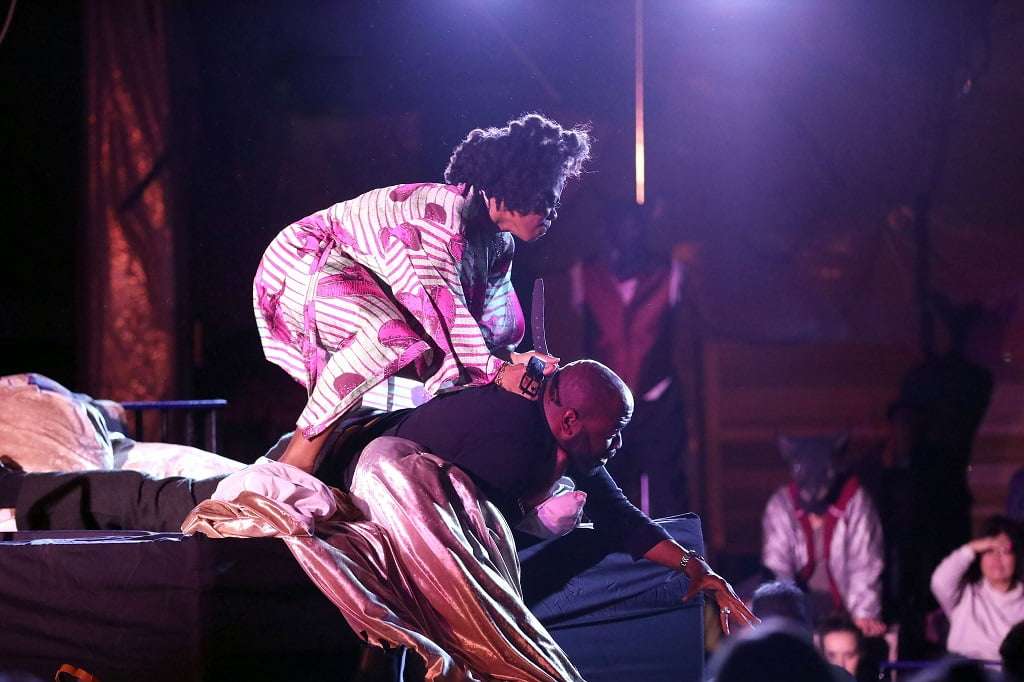 Is it really thirty-five years since your reviewer was at Tower Ballroom to hear The Smiths on their first UK tour? The venue has not changed so much in terms of its designer seediness, making it the ideal location for Lady Macbeth of Mtsensk as staged by Birmingham Opera Company, an organization which seeks to provoke at all costs, and if such an attitude can easily seem its own justification, the track-record of BOC’s successes – most recently with a timely and engrossing reappraisal of Michael Tippett’s much-maligned The Ice Break – cannot be gainsaid.

The epitome of Soviet music-theatre in its (relatively) unfettered first phase, Shostakovich’s opera now enjoys repertoire status as might risk diluting its visceral essence. There was no chance of that happening here, given BOC’s commitment to a ‘total theatre’ once favoured by such innovative outfits as John McGrath’s 7:84 and whose lineage can be traced back at least as far as Artaud’s Theatre of Cruelty.

Certainly, the experience begins immediately on entering the venue – actors and participants mingling informally with listeners on a dance-floor which serves both as performance-space and auditorium. Whether such figures as the vagrant looking for hand-outs, or that bemused-looking Muslim cleric are participants or merely on the guest-list became points of interest prior to the performance getting underway. 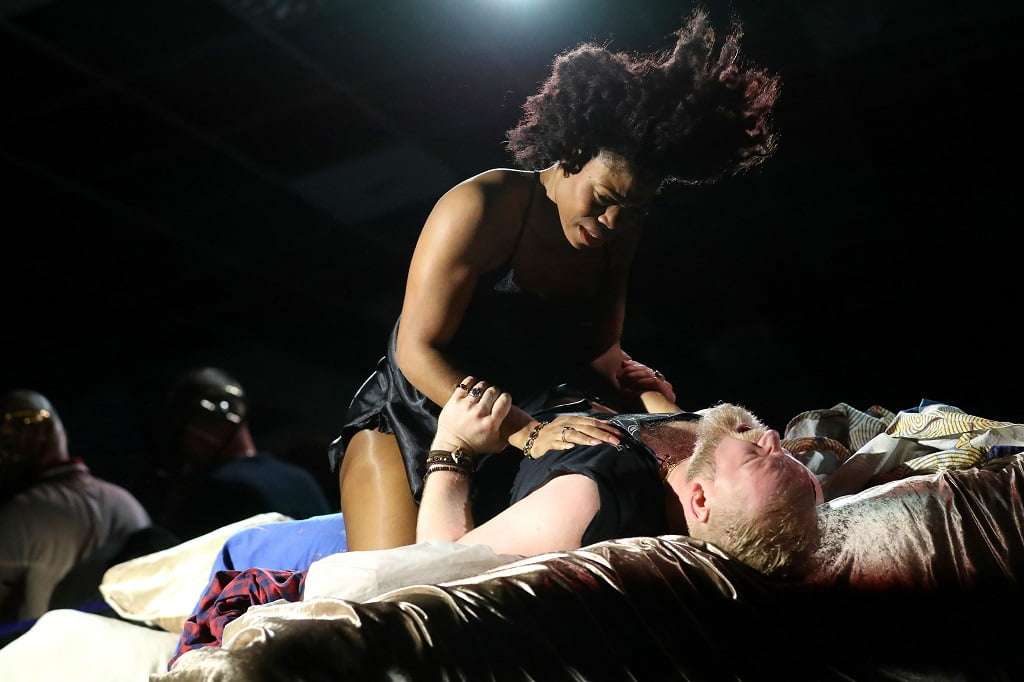 When it did, the ambience resembled one favoured by Oliver Stone when filming Natural Born Killers. Although certain scenes take place on a proscenium area at stage-right (at point of entry), with the orchestra seated in a raised enclosure on the opposite side, much of the action plays out within and around the audience – thus leading to any number of near-collisions and ensuring an unpredictability such as keeps everyone involved on tenterhooks. The bar next to the orchestra is reserved for performers, while the public bar is a cash-only enterprise as if intent on striking a blow against the niceties of late-Capitalism (much thanks to the patron who donated her interval G&T to your thirsty correspondent). Seats are available for anyone who is unable to “move around with the performance” as this unfolds.

Such an all-out production as Graham Vick conceives it needs designs to match, and these are duly provided by Block9 with brutalist profiles and inherent tackiness as no sweat-shop would ever countenance. Having the brass attired according to the scene in progress is a stroke of brilliance, as too are those over-satiated wedding guests who remain ‘in apparel’ as prisoners for the Siberian-set final Act. Ron Howell’s movement is fluid and frenetic, while Giuseppe Di Iorio’s lighting parallels the lurid, primary colours in which this music abounds.

The cast is a fair mix of up-and-coming with established singers. As The Wife (all Russian character names having been abandoned), Chrystal E. Williams overcomes initial unsteadiness for a commanding and empathetic account of the beleaguered anti-heroine; her assumption at its best when it needed to be – during her arias of self-revelation towards the close of the first and final Acts. Her physical commitment to the role is matched by Eric Greene in that of The Father-in-Law, for all that the latter’s frequently gritty singing makes a caricature out of this callous figure; a subsequent appearance as The Prisoner highlights Greene’s baritone to better advantage. Joshua Stewart is lacklustre in the admittedly unrewarding role of The Husband, but Brenden Gunnell brings no mean heroics to that of The Lover – whose grand-standing antics and pitiable feet-of-clay is similarly well-conveyed. 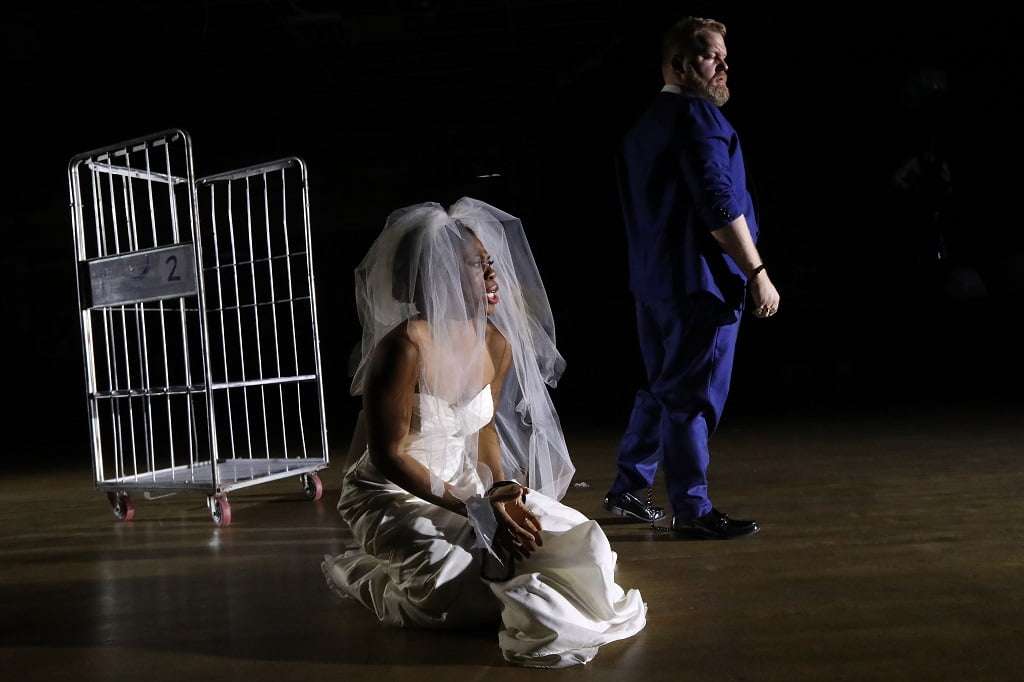 The numerous smaller roles are a mixed bag in vocal terms, but Grace Nyandoro as The Maid, Edward Harrison as The Socialist and a redoubtable Quentin Hayes as The Chief of Police briefly stole the show.

The intermingled chorus and actors of BOC are as formidable in number as they are strong on conviction, contributing a great deal to the overall impact, with the CBSO no-less committed in response to the assured conducting of Alpesh Chauhan. Hardly his fault if any subtlety or understatement is at a premium, given an acoustic which has immediacy in spades but little depth of perspective, or that the separated brass is sometimes significantly out of sync with the rest of the orchestra.

It is worth remembering Shostakovich wrote Lady Macbeth in support, not in subversion, of Soviet cultural policy as it then was; from which vantage Vick’s unrelenting emphasis on its provocative aspects encourages an overtly two-dimensional view. Even so, the sheer dynamism and unflinching physicality of BOC’s production makes for an experience like no other at present and is required viewing. Response was enthusiastic, even though identifying the punters from amid the overall melee was anyone’s guess.