Britten
The Prince of the Pagodas, Op.57– ballet in three acts to choreography by David Bintley [London premiere] 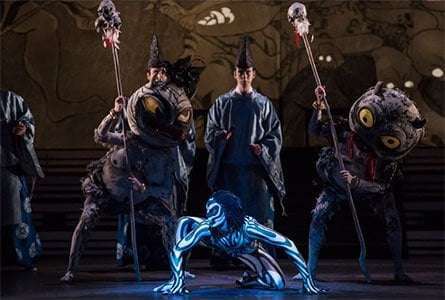 Nowhere was it more apparent how British ballet has split than during London’s opening night of David Bintley’s The Prince of the Pagodas by Birmingham Royal Ballet. Bintley sits very firmly in the mainstream of the British ballet tradition, the tradition established by Ninette de Valois, Frederick Ashton and Kenneth MacMillan: he crafts fine narrative work with a sure hand and his own choreographic voice, while very much his own, is recognisably English in its lyricism and musicality. With The Royal Ballet there is a very different focus, with Wayne McGregor’s jagged star still very much in the ascendant and the mid-Atlantic Christopher Wheeldon entrusted with the creation new three-act narratives (his The Winter’s Tale opens soon). The two companies were once described as ‘sisters’ whereas now they are no closer than cousins, and probably distant ones at that. BRB maintains a more lyrical, expressive quality that is recognisably in the English tradition, something largely jettisoned at Covent Garden as a result of choice of repertoire and a League of Nations approach to the schooling of its dancers and their movement style.

Bintley’s Prince of the Pagodas was originally created for the National Ballet of Japan in 2011 and made its UK-debut in January of this year. It was Ninette de Valois herself who suggested to the then twenty-one year-old Bintley that he should consider Britten’s rich but, in dance terms, tricky score, commissioned by The Royal Ballet and first performed with John Cranko’s choreography in 1957. That first version did not find favour, nor did Kenneth MacMillan’s 1990 treatment, again for The Royal, and there have been other versions around the world, but I think that Bintley makes the best case for this work with his interpretation. He is immeasurably helped by the visual delights afforded by Rae Smith’s set and costume designs, beautifully and creatively lit, by Peter Teigen. The designer, best known for her work on the Royal National Theatre’s War Horse, provides a feast of Japanese tableaux based on Utagawa Kuniyoshi’s nineteenth-century woodblock illustrations. What emerges is something of true distinction, with beautiful colours and extraordinary costumes (with supernatural creatures, there is a clear reference to Goncharova creations for Kostchei’s minions in The Firebird). The quality of the visual concept is fully in the tradition of superlative design as established by Diaghilev’s Ballets Russes; little more is delightful than Smith’s filigree representation of Mount Fuji in Acts I and III. The Japanese aesthetic makes perfect sense, not only because this production premiered in Tokyo, but because of the eastern sonorities of Britten’s score, heavily influenced by a trip to Bali and its gamelan music. 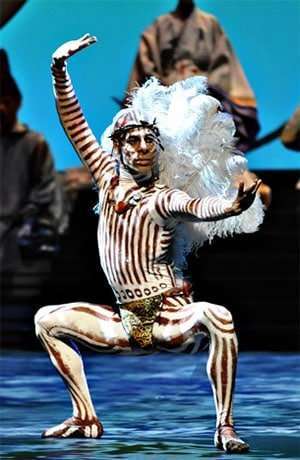 Bintley has sought also to rationalise the storyline (an original creation by Cranko) fusing elements of The Sleeping Beauty and Beauty and the Beast, as well as King Lear and Cymbeline. It was, if truth be told, never convincing, and the central character of the Salamander Prince of the Pagodas, was always a personage without a real purpose – who is he? Why is he a salamander? Bintley transforms the narrative into the tale of a sister finding a lost brother, cruelly transformed many years before by their wicked Empress stepmother. Doubts that a tale of sibling- rather than romantic-love would fall rather flat are dispelled in performance. The ballet gets better and better as it progresses, from a slightly undercooked first act, which essentially is showcase for the four demi-caractère suitors for the hand of Princess Belle Sakura (cherry blossom, denoting kindness), to the Princess’s second act trials of Earth, Air, Water and Fire – cue fluently choreographed divertissements – which lead her to Pagoda Land and the Salamander who is finally revealed to be her brother. Best of all, Act III, which sees the Emperor’s Lear-like decline, the Empress’s defeat and the final rejoicing as the Prince is finally restored both to his sister and his father in an outpouring of joyous dance.

The dancing, when at last it properly gets going, is of a high standard and both Momoko Hirata, dancing with soft pliancy as a gentle and lyrical Belle Sakura, and Joseph Caley, as a flexible salamander and an exuberant prince, impress. They are phsically very well matched and truly make something of their final pas de deux. Of note is Rory Mackay’s Emperor, whose Act I dodderiness contains more than a nod towards de Valois’s own Red King in Checkmate (one of Bintley’s best roles as a dancer) and whose physical and mental frailty in Act III before the return of his daughter is genuinely moving. Corps dancing is of a high standard (especially in the last act) and particular mention must be made of James Barton’s White Rabbit-like Uncle Sam lookalike King of the West, particularly fleet-of-foot, as well as the deliciously camp and extravagantly costumed Deep-Sea Creatures of Brandon Lawrence and Tom Rogers in the Act II Water section. Bintley places his Pagodas choreographically in a typically English half-way house, with full-on neo-Classical dancing (‘proper ballet’, as I heard it described) and dancing roles which include a great deal of character and acting (demi-caractère parts – an endangered species in the ballet world).

Adding to this evening’s ultimate success is Koen Kessel’s magnificent conducting of Britten’s score and the lustre Royal Ballet Sinfonia’s full-blooded playing. The score is superb, its sonorities truly exciting, but it has always been criticised for not being particularly danceable. It is true that the composer’s collaboration with the choreographer was not close, and that may go a long way to explain this, but there is so much of beauty and intelligence in the music that it demands to be heard, and heard in theatrical performance. Bintley is a musical choreographer (again, very much in the English tradition) and he makes much sense of the sometimes difficult rhythms in the score. His Pagodas can, despite a degree of unevenness, be counted as a success, not least because alongside his fluent choreography, both the designs and the musical performance are of the highest quality.