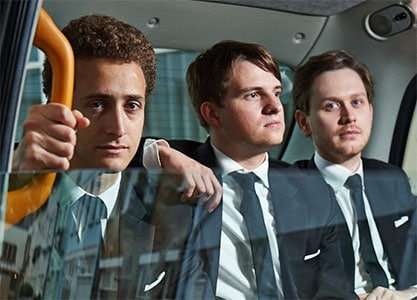 Not one but two substantial encores were demanded after this recital, a mark of just how well the performances had come across. Named after the great violinist Adolf Busch – the violinist plays one of his instruments – the prize-winning Busch Ensemble has for some time been appearing as a piano trio, but free to recruit others for specific projects, something of which Busch – who presented anything from a solo to an octet in his own chamber concerts – would have approved.

Beethoven’s E flat Piano Trio received a virtually perfect performance, buoyant and witty by turns in the three faster movements, where Omri Epstein’s technical address, pearly touch and natural timing were ideal. The work allows the strings to flower only in the Adagio cantabile, and here Mathieu van Bellen and Jonathan Bloxham could unfurl their individual beauties of tone. Over the years I have found that one of two factors has unlimited my enjoyment of some trio ensembles, the pianist’s mannerisms or the violinist’s tone (cellists tend to be pretty good these days). With the Busch Ensemble, I cannot imagine anyone taking exception to the playing of Epstein or Van Bellen.

I was interested to hear Frank Bridge’s 1907 Fantasy Trio because for some reason I have not encountered it as often as the great Second Trio of two decades later or the Fantasy Piano Quartet. It is a very well-wrought piece which, like all contenders for the Cobbett prizes, subsumes several movements into one. I do find the melodic content of Bridge’s earlier music rather Edwardian but, with that proviso, it is a highly effective piece. The performance was both accomplished and passionate.

Wolfgang Rihm’s series of pieces entitled Fremde Szene, composed in 1983-84, pay homage to Schumann but do not quote him. The third and final piece does have one or two passages where the piano recalls a Schumannesque world, but that may simply be because I have been forewarned. Rihm uses string harmonics and extremes of register and dynamics, and the work becomes pretty violent. This performance seemed to be fully in command of every aspect.

Ravel’s 1914 Piano Trio caused problems for the performers at its premiere and, despite a few revisions, has not become any easier to play since then. The Busch Ensemble is already able to reveal most of its beauties and I was delighted to hear Mathieu van Bellen’s lovely portamento in slurred phrases – Ravel never heard a string player who did not slide! I would have liked Bloxham to match his phrasing in this regard, and I would have preferred a more crystalline, less pedalled, response from Epstein in one or two places, especially at the very opening. These things aside, the musicians deserved their reception.

The Andante of Mendelssohn’s D minor Trio was like a benediction after the intricately wrought Ravel; and how better to end the evening than with Haydn’s Gypsy Rondo? This recital was yet another feather in the cap of the Kirckman Concert Society.