In the Upper Room 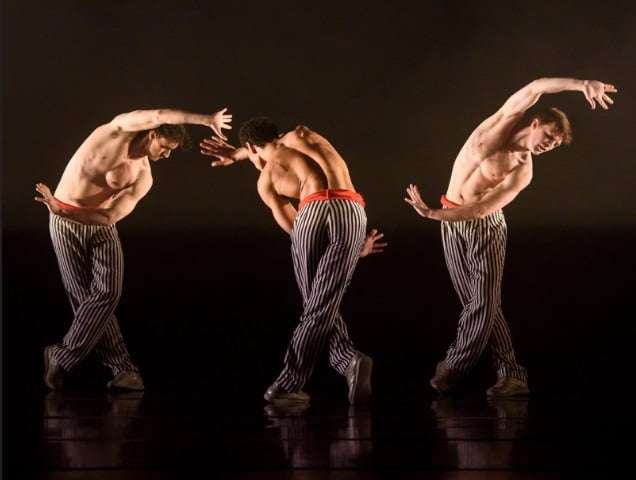 Quite what ‘Polarity and Proximity’ actually means as the title of Birmingham Royal Ballet’s triple bill at London’s Sadler’s Wells is anybody’s guess, but whatever its meaning, it cannot disguise an inconsequential evening of dance. Certainly, the days of the well-crafted mixed bill appear to be firmly in the past at BRB as at Covent Garden, with seemingly random choices of works placed together. So it proves again here with a bizarre juxtaposition of three ballets which does nothing to highlight similarities or differences, either choreographically or musically.

The enthusiasm shown for Alexander Whitley’s Kin in some quarters is not shared by your critic. It is mercifully short at just over 20 minutes, but both Phil Kline’s music and Whitley’s movements simply do not go anywhere. Set in a darkly oppressive setting by Jean-Marc Puissant who also provides black costuming and presented by Peter Teigen’s stygian gloom, it is about as far from an uplifting choreographic opening amuse-gueule as one could get. Whitley is classically-trained but has assimilated other influences, including Wayne McGregor and Michael Clark – he provides a five-movement work for ten dancers in which yearning and lack of fulfilment but little else seem to hang in the air. Jenna Roberts impressed as the female lead, spiky and expressive in her first movement solo, expertly partnered in the complicated and tortuous lifts of the third movement pas de deux by Joseph Caley, the role’s originator, on loan from his present company, English National Ballet. Overall, Kline’s tedious composition is matched by unfocussed choreography on the stage. 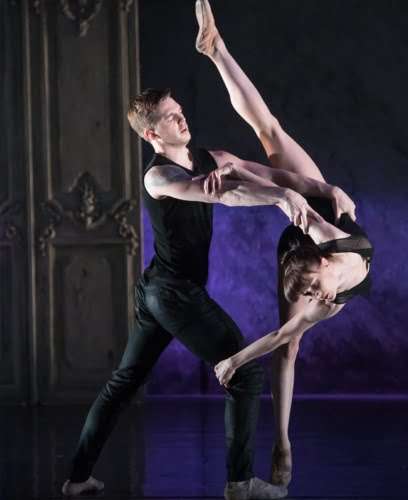 Embrace is a new work by another up-and-coming dance-maker, George Williamson to a tremendous commission from the notable American composer Sarah Kirkland Snider. Snider creates a thrilling sound world, using the many sonorities of a full orchestra and building her music into truly impressive climaxes. It is rich and satisfying, an impressive first dance score from her, making one wish to hear more of her work very soon. Williamson has approached creating dance for it as a form of personal therapy, putting on stage his own, personal journey as a gay man. Very now, very much in the zeitgeist, but, even with the aid of a dramaturg, disappointingly obvious; young man lost in the swirling mass of society, attempts at a relationship with a woman, much angst, fulfilment with another man, cue joyful ending.

Williamson is at his strongest in pas de deux work, creating interesting movement between Brandon Lawrence as He and both Delia Mathews as She (soon to become Girl Friend rather than girlfriend) and Max Maslen as Him. The male/male duet is a highlight, with Williamson finding a vocabulary that does not simply employ male/female movement and transposing it – much mutual support and partnering, moments of genuine intimacy while never compromising the maleness of both dancers. In ensemble work, the choreographer is on shakier ground, with over-emphasis underpinning much of what he asks his dancers to do, and paradoxically at times, a reluctance to go far enough. In one section He finds himself against one assumes straight men – all obvious foot-stamping, shoving and aggression, but, for a lesson in how to portray a macho environment, Williamson would have done well to see what Kenneth MacMillan created for The Judas Tree in 1992 – far more successful. MacMillan was also the past master in portraying outsiders, from his earliest works all through his career, and Williamson might well have gleaned more subtle ways to show He’s ‘otherness’. 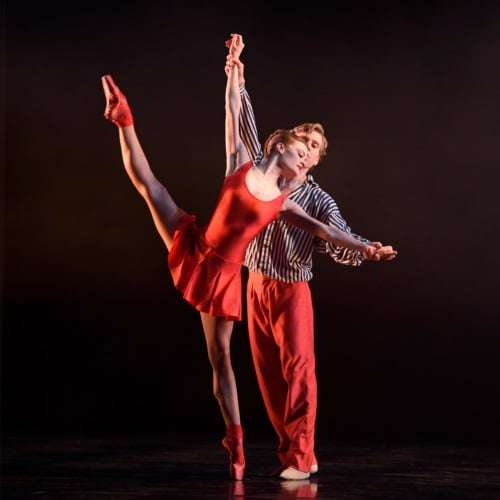 The dancers served their choreographer well, with Lawrence giving a sterling performance and Maslen impressive as Him – this interesting and clearly strong dancer featured in all three works in this programme, consistently catching the eye with the poise and grace of his movement, his care with placement and in achieving harmony. Costumes consisted of coloured tight tops and pants over which gauze skirts, tops and trousers were worn, while the raised platform at the back (which allowed for scenic effects) made entrances and exits distinctly clunky. At nigh-on 40 minutes Embrace is also far too long, a feeling of self-indulgence creeping in which is not quite dissipated by Snider’s superb score. 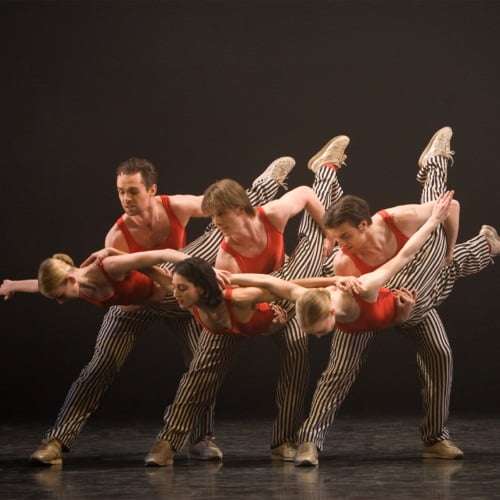 Twyla Tharp created her high-octane In the Upper Room in 1986 and it has been performed on and off by BRB since 1999. It too lasts too long at almost three-quarters of an hour and is wearyingly relentless in its fast and furious quality to ever-insistent Philip Glass. There is much to enjoy, despite the bizarre costuming that sees the dancers in 80s striped tops and trousers which they slowly lose as the work progresses. Tharp’s style is typically pick-and-mix, instantly recognisable as her own, and now copied the world over. She mixes classical dance, street movement, gym exercises, jogging, Broadway tap and soft-shoe shuffle – it all goes into the pot as she sets the Classicals (pointe shoes and ballet slippers) and the Stompers (trainers) into a perpetuum mobile, dancers constantly emerging from the black curtains that hang at the back of the stage or from the sides only to disappear again. Not all the dancers seemed entirely at home in Tharp’s particular idiom, and a few were unsure in their partnering. Laurels to Classicals Max Maslen, the glamourous Céline Gittens, the striking Delia Mathews and Stompers Tyrone Singleton who danced with a slinky freeness and Kit Holder, fully engaged in the requisite style.

An upbeat ending to a somewhat sub-fusc evening which, as a whole experience, did not satisfy.