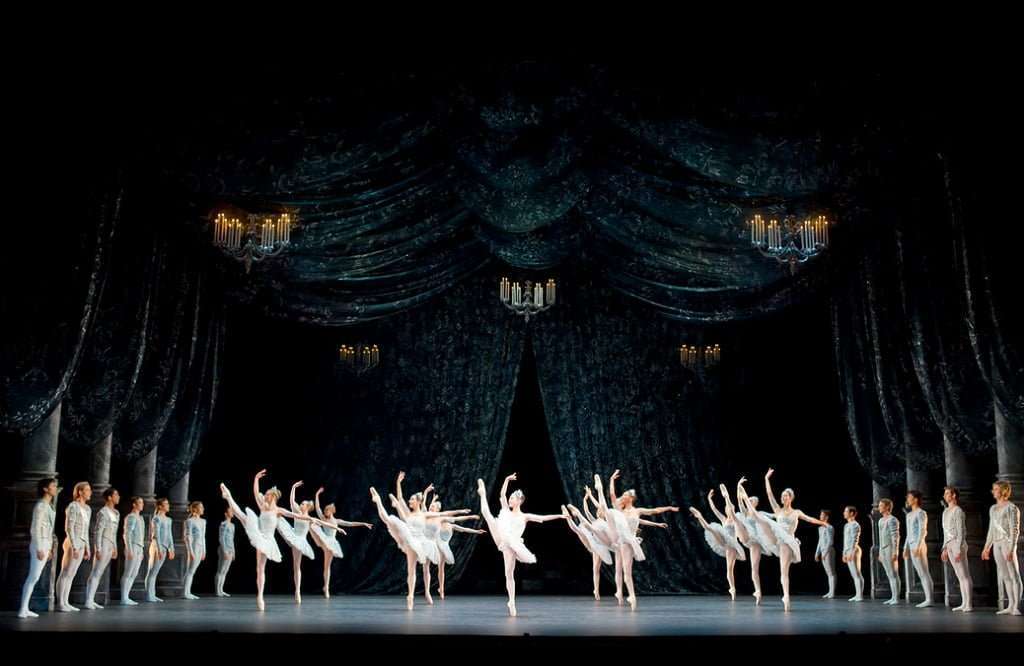 In what proves to be one of the most satisfying recent Mixed Bills of ballet, David Bintley brings his Birmingham-based troupe to its ancestral home, London’s Sadler’s Wells. The art of creating a good mix is a surprisingly difficult one; works must complement and contrast, not only in style, aesthetic and look but also in terms of music. Sir Peter Wright, BRB’s one-time director and still pater familias as its Director Emeritus, has always known how to construct a good evening of different works, and Bintley also possesses the talent, and so it proves with this evening, wholly satisfying in its combination of works.

First, George Balanchine’s opulent Theme and Variations, set to the Tema con variazioni movement of Tchaikovsky’s Suite No. 3, in which he pays tribute to the great Imperial ballet style of his own training in Saint Petersburg before the cataclysm of 1917. As a curtain opener, set among Peter Farmer’s swagged curtains and chandeliers, it looks sumptuous, the dancers shimmering like the diamonds of an extravagant parure. BRB does not possess the grandeur of style that this work ultimately needs – there are few companies on the world stage which do – but that is not to say that it should not, or indeed, cannot dance it. If one looks for more grandiloquence at times, if one misses the imperiousness of gesture, there is much to please: the company is in fine form at present, with excellent ensemble and shared musicality, most notably from the quartet of female soloists. 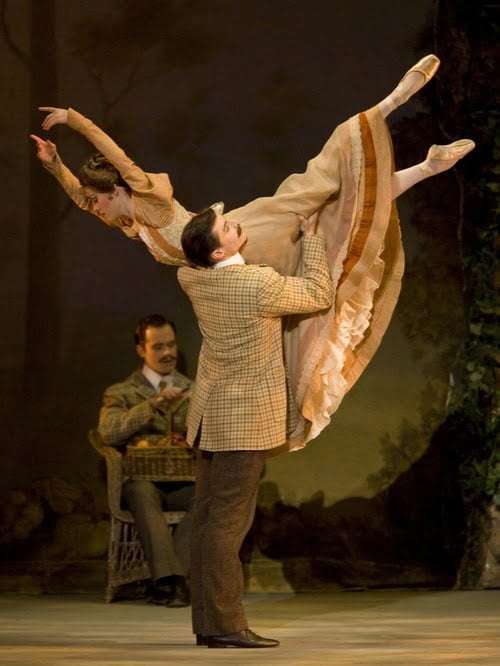 Momoko Hirata is an exquisitely-wrought, filigree dancer for whom the main part, created in 1947 by the great Cuban ballerina Alicia Alonso, holds few, if any, technical terrors. She is petite, with quail-boned movement, so lacks the ‘imperial’ quality that the chief exponents possess, but is able to establish a pleasing interplay between the choreography and the music. Joseph Caley has been carefully nurtured by Bintley and his team, and has developed into a fine male dancer while still retaining some of his infectiously boyish personality. The lead male role is notoriously difficult, the cause of many a sleepless night for premiers danseurs since its creation by Igor Youskevitch, especially Variation VI in which requires eight successive double tours en l’air. Caley brought a degree of insouciance to his dancing, matching Hirata’s lightness of touch, and, while not in the great tradition of danseurs nobles, delivered a wholly successful reading on his own terms.

Enigma Variations is one of Frederick Ashton’s masterpieces, an exploration of friendship, of personal anguish (the choreographer sets the work around the nervous time before composer received news that his work had been accepted for performance) and of that certain strain of pre-Great War Englishness which the conflict swept away. It is, therefore, a delicate work, which requires an uncommon sense of unity between the characters and a focus of emotion; otherwise, its episodic structure (the variations) break down into vignettes without enough of a common thread running between them. And so, alas, it proved at this performance.

The key to the work is the personage of Elgar himself, which must exert a gravitational pull on all the others, bringing them together, binding the ballet. Jonathan Payn is a dancer whom I admire, but, in an attempt to find something new to the role, I suspect, became a stiff-necked Elgar, far too over-emphatic of gesture. Samara Downs was a delicate, soft-focussed Lady (his wife), pliant of torso and gentle of gesture but missing the devotion she has for her husband and the filament of steel that runs through her character as she tries to be there for him while attending to her numerous house-guests. There was spectacular mis-casting in some roles, dancers who are simply not suited to them, but others impressed greatly: Valentin Olovannikov as A J Jaeger was pitch-perfect, bringing weight and meaning to his gesture, presenting as the perfect image of an Edwardian gentlemen, and Tzu Chao-Chou bounding gleefully as G R Sinclair, Wayne Sleep’s created part.

Elsewhere, there was a lack of care to the upper body among many of the female parts, that extravagant épaulement, those low, luscious bends which Ashton cared for so deeply. This was more a sketch of Enigma rather than Asthon’s full-blown oil painting. Julia Trevelyan Oman’s beautiful, atmospheric sets and costumes still look ravishing, providing the perfect setting for the choreographer’s artistry. 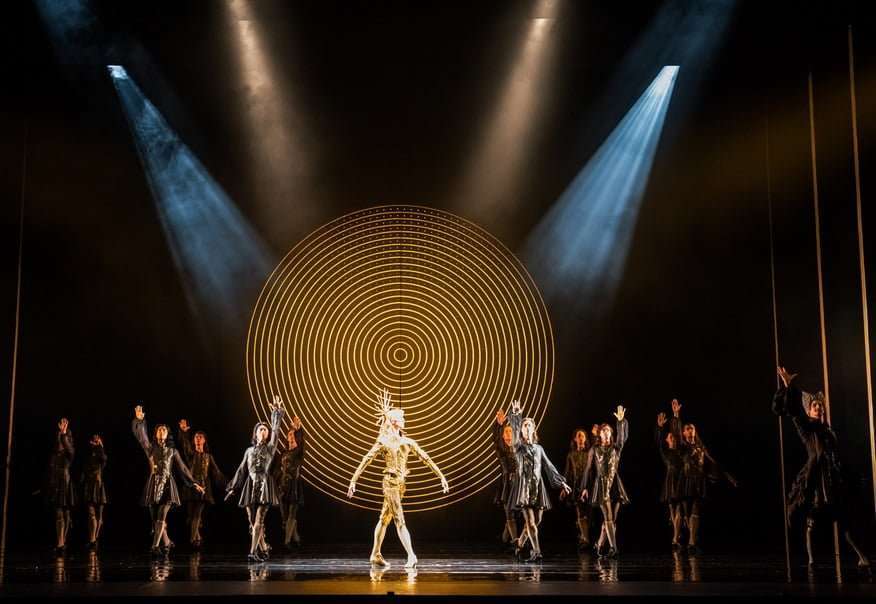 David Bintley’s latest work The King Dances is new to London; it is the product of detailed research and a desire to explore male dancing through one of the most talismanic dancers in history, Louis XIV himself. I saw the first performance in Birmingham in the early summer and was pleased to reacquaint myself with this work: it is intelligent, brave and stimulating, brilliantly set in a black box with a reflective floor into which come the dancers clad in Katrina Linsday’s superb evocations of seventeenth century court dress. Lighting is also of the first order, from flaming torches to sharp cross-lighting, making the dancers at times seem suspended in the void. The inspiration is the 1653 Ballet de la Nuit, an allegory of the passing of night which ended with Louis himself, then still a boy King, appearing as the sun itself to dispel the shadows of the night. It was a political statement in which he and his minister Mazarin sought to reassert the power of the crown after the shambles of the Fronde, but it also created one of the most iconic images of all dance, the King dressed as the Sun.

Bintley has taken baroque dance and fused it with his own style, making for a successful amalgam and bringing a new vocabulary of movement to his audience. At the work’s centre, two dancers: Tyrone Singleton in the dual role of La Nuit, a powerful, menacing part, replete with emphatic gestures of command and control and, finally, as Mazarin announcing the arrival of the Sun King. Singleton did not create the role, but he is more detailed and more powerful in performance than his predecessor. William Bracewell is a dancer about whom we shall hear more and more. He is a young, beautifully proportioned dancer who has already made his mark and here receives his first major created part as Louis. His movement quality is graceful, utterly satisfying, nowhere more so than in the Third Watch during which the King is terrorised by demons and monsters in his sleep. This is perhaps the strongest section by from Bintley overall, the King, in nightshirt, is carried around the stage in slumber only for the ghouls and ghosts of the night to proceed to terrify him.

The final section is made by Stephen Montague’s tremendous commissioned score, which uses a heavy and increasingly emphatic baroque rhythm to build up to the emergence of the Sun King, Bracewell clad head to toe in a shimmering suit of golden light. It makes for an exhilarating close to a superbly crafted Mixed Bill during which the contributions of the company orchestra under Paul Murphy were notable – the Tchaikovsky possessed an expansive warmth, while the Elgar was idiomatic; Montague’s multiple demands were also superbly met.