The Centre and its Opposite 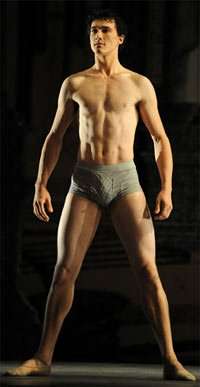 Well, they certainly saved on costumes! In fact the costumes for all three ballets could easily have fitted into a Morris Minor – skimpy underwear seemed the order of the day. A pity that much of the choreography didn’t merit the attention all that naked flesh elicited.

David Bintley has, I am sure, scheduled this modern triple bill to show that his company is not just about endless runs of the classics and heritage repertoire, and good on him to show that ballet is indeed a modern and vibrant art form. However, to schedule a full evening of this stuff was perhaps to place too much faith in the quality of the works and the positive effect they would have together.

Stanton Welch’s miserable Powder was not the best of beginnings. Welch is much fêted in his native Australia, but on the basis of this offering it is hard to see why: set to Mozart’s famous Clarinet Concerto, Powder constantly flounders to mirror the invention and beauty of the score. Welch’s get-out to is to get all jokey on us, so Mozart’s music is accompanied by semaphoring, twitching, head wobbling and a myriad of ‘amusing’ little movements which merely draw attention to the fact the Welch is singularly lacking in anything valid to say. 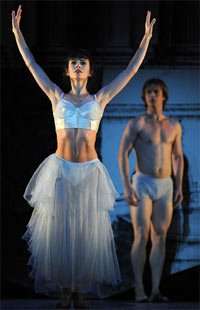 He would be well advised to steer clear of ‘great’ music and stick to something light and trite – that way his choreography might have a chance of reflecting what the audience is hearing.

The set is a flat of a delightful baroque hall with some more hanging ‘columns’ in front of it – very ingenious and by far the most interesting thing. Costumes were essentially corsets and knickers for the women and pants for the men, all of whom spent inordinate amounts of time prancing about to no discernible effect. My only moment of enjoyment was when four men ambled around at the back among the columns, rhubarbing mimetically about the astonishing grandeur of it all like a potentate’s catamites allowed out into the rest of the palace for a walk before getting back to work.

Some dancers stood out, even in this poor showcase of their abilities, not least the striking Aaron Robison, who appeared in all three works. He is tall, handsome and muscular, with a flexible body. Most importantly, he believes totally in everything he does – he gave a ‘performance’ in every appearance, and impressed by his attack and engagement. 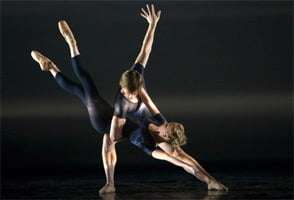 Best of the bunch in this triple bill, was company director David Bintley’s new E=mc2 which sees him tackling something ‘big’ while clearly experimenting in terms of movement and choreographic combinations. Not all is successful, but enough works to merit second viewing.

Bintley has taken the Diaghilev approach of creating everything afresh. The choreography apart, the most notable contribution is Matthew Hindson’s score, which is truly monumental, spanning the massively scored first movement (‘Energy’) to the fast, filigree ‘Celeritas2’. This is a superb work: thoroughly modern, genuinely exciting and challenging – I cannot praise it too highly, given the threadbare nature of many contemporary compositions. This is a composer who wants to create for a full orchestra and make music, as opposed to the sound of a jet engine, or dentist’s drill.

‘Energy’ was Bintley’s weakest section, a confused mass of bodies engaged in a sort of perpetuum mobile which failed to inject much form or structure to the movement. Joseph Caley hurled himself obligingly through the virtuoso enchaînements Bintley has devised and looked far more comfortable doing so (despite being in what looked like PVC panties) than the grimly determined and ever-so-slightly-worried-looking Elisha Willis. 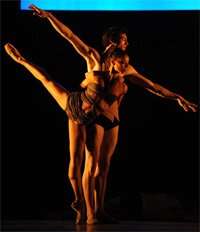 Most successful was ‘Mass’, a beautiful grouping of three trios whose movements clearly owe much to Kenneth MacMillan’s abstract works and even Frederick Ashton’s Monotones and Daphnis and Chloë. This is not to cast any doubt on Bintley’s creativity, for ‘Mass’ is distinctively his, but it is to underline the choreographer’s impeccable choreographic pedigree. Musically, ‘Mass’ is a lushly scored, string-heavy quasi-violin romance and is quite beautiful. 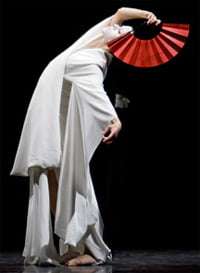 ‘Manhattan Project’ has no music, merely the sound of the explosion and after-roar of the atom bomb made visual by Dusty Button alone, clad in stylised kimono, face whitened and manipulating a red fan. It was profound, simple and moving, and underlined the horror as well as the beauty of scientific discovery and advancement. Button, barely out of the Royal Ballet School, caught the eye and held it, commanding her stage; one longs to see her and her long legs in Balanchine’s Bugaku.‘Celeritas2’ is a fast-moving piece, exhausting for the dancers (and audience), who show off their speed, not least the superb Alexander Campbell (one of several young promising dancers in this company) and recently promoted principal Carol-Ann Millar, a superb demi-caractère dancer with speed, attack and impressive ballon. Lighting is atmospheric and costumes skimpy. The Royal Ballet Sinfonia under Paul Murphy played magnificently.

Then it was back to earth with William Forsythe wannabee Garry Stewart’s brand new The Centre and its Opposite. All the elements are here: brutalist lighting, banging dustbins and industrial crunching score and split-your-fanny choreography. Except that Huey Benjamin is no Thom Willems and Stewart is certainly no Forsythe.

We have seen this sort of thing years ago (1988 if we think of In the Middle, somewhat Elevated) and it is now old hat, Forsythe himself long having moved away from his self-filleting choreography. Consequently it is all a monumental bore. In addition, the company looks ill at ease with this sort of movement, not helped by Meyer-Wiel’s costumes which, apart from the requisite panties for everyone, have jerkin tops which make the women look dumpy.

Robison again was outstanding in all of this, as was Dusty Button, who came into her own, long legs scissoring and stabbing like the best of them. There is no need for this sort of empty posturing, but if there is, I suggest BRB saves up its pennies to pay for a piece of genuine Forsythe instead of this cheap repro.