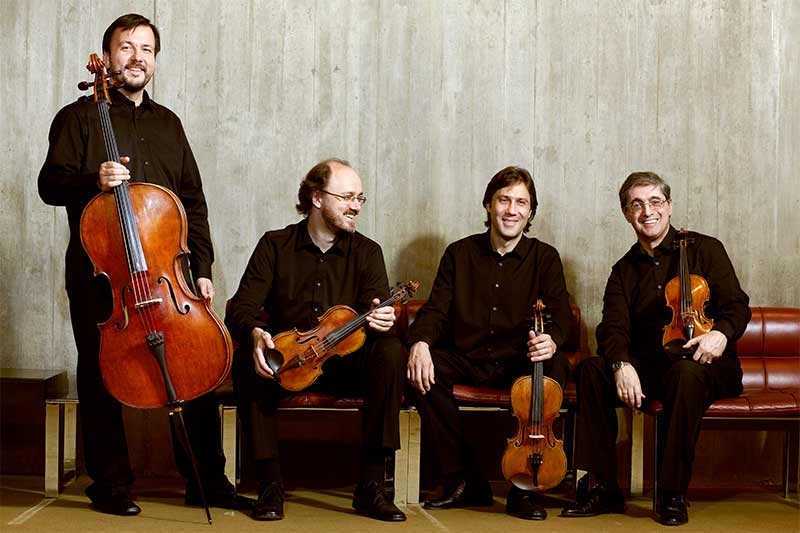 Since 1945 the Borodin Quartet has built a formidable reputation through recordings and in the recital room and is currently marking its 70th-anniversary with Beethoven and Shostakovich String Quartets, a complete journey that will cover three seasons at Wigmore Hall. Perhaps it is these musicians’ playing of the Russian masters (core repertoire) that has earned them the oft-dubbed tag as one of “the world’s greatest string quartets”, or the fact that its founder members (the present four all joined at various times since 1996) enjoyed a close relationship with Shostakovich, and still provide its current players with some measure of authority.

Such Interpretative insight is, of course, a major bonus, and their musicianship goes without saying, but listening to them here I wondered if their playing style (wonderfully polished as it is) was to everyone’s taste. The juxtaposition of Beethoven and Shostakovich points to emotional extremes; and in this respect a wider dynamic range and broader tonal palette would, on occasion, have been welcome. Pianissimo was never quite reached in the madcap Presto in the Beethoven and more virile, gutsy tones would have underlined the sense of paranoia in the single movement design of Shostakovich’s Thirteenth – dedicated in 1970 to the then recently retired violist Vadim Borisovsky of the renowned Beethoven Quartet.

But the Borodin Quartet is a dignified and undemonstrative ensemble, which under straight-backed leader Ruben Aharonian (of nearly twenty years) combines trademark composure with extraordinary sonic unanimity. Clear from the off in Shostakovich’s First Quartet (1938) was a commitment to a totally unified sound, where individual tone colour became part of a collective package, albeit beautifully blended. This worked well in the two Moderato movements where restraint and tonal purity paid dividends in the string-trio sonority of the first and the folk-like gestures of the second. Here violist Igor Naidin was on exemplary form. There was just the right degree of feverish intent in the (muted) first Allegro and in the second (senza mutes) Aharonian glided effortlessly over its athletic runs, although at times the ebullience seemed just a little too well-behaved.

With the minimum of expression and carefully calibrated weight of tone Naidin perfectly captured the sense of brooding desolation that sets in motion the Thirteenth Quartet. Its central danse macabre may not quite have been the unbuttoned “jam session from hell”, as Eugene Drucker of the Emerson Quartet once described it, but the repetitive bow-taps and glacial control at its close added considerably to its sinister atmosphere.

A logical tonal shift from B-flat minor to B-flat major took us to Beethoven’s Opus 130. The “light as air” semiquavers in the opening movement (the first of six) were mostly clean and tidy and the slower tempos never lost their momentum within the whole which unfolded naturally towards the climatic, yet unforced sforzando restatement of the rising fourth motif. However, had the players’ sforzandos been more pointed in the Presto an even greater sense of excitement might have emerged. The Andante was beautifully elegant but the address gave the impression that everyone at this particular party was impeccably dressed and resolutely sober. This is music that soars and I longed for more singing tone.

Following a mannered ‘Alla danza tedesca’ the ‘Cavatina’ showed the Borodin musicians at their finest: every detail poised with violins virtually indistinguishable from one another, distilling into a single sound. The musicianship and ensemble here was the highlight of the evening, which ended not with the ambitious original Finale, Grosse Fuge (now Opus 133), but the leaner, playful Allegro that Beethoven’s publisher prompted. It was good to hear Beethoven’s alternative, even if its teasing quality didn’t quite materialise. The rendering of the whole gave ample evidence for hearing the Borodin Quartet again during its Wigmore celebrations.