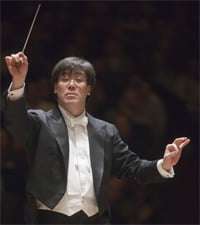 Alan Gilbert’s career has been rising rapidly since he became chief conductor of the Royal Stockholm Philharmonic Orchestra in 2000. Next season, Gilbert will take over as music director of the New York Philharmonic, the first native New Yorker to fill that position, and at 42, one of the youngest conductors ever to hold the position.

Gilbert is known for putting together adventurous and engaging programs. For this guest engagement with the Boston Symphony Orchestra (an orchestra he has twice previously conducted), he remained true to form, choosing three varied works from the early twentieth-century, each by a boldly independent composer, and two very rarely heard in Symphony Hall.The program opened with a gripping account of Sibelius’s Night Ride and Sunrise (1908), the BSO’s first performance of it since 1918. Gilbert and the orchestra brought out all the dark colors in Sibelius’s strange and somber musical landscape with its obsessive ostinatos representing the relentless rhythm of the horse’s hooves carrying a rider to a glowing sunrise grandly heralded by the BSO’s confident horns. 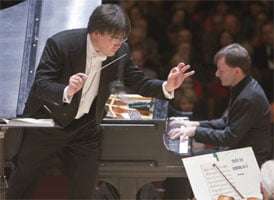 Stephen Hough was the soloist in the most familiar work on the program, Rachmaninov’s Rhapsody on a Theme of Paganini. Hough’s playing was marked by a marvelous, unsentimental expressivity – uncommonly powerful in the climactic moments, but gracefully lyrical in the more ruminative passages. Gilbert and the BSO musicians provided fine support, with orchestral detail persuasively delineated and the strings sounding especially warm in the sublimely lyrical Eighteenth Variation. The audience responded to the stirring and affective performance with a loud and prolonged standing ovation. 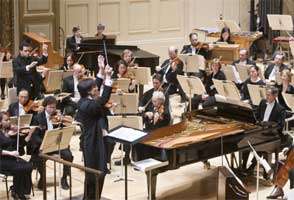 Following intermission, Gilbert led a performance of Charles Ives’s majestic Fourth Symphony, a work of astounding originality and a virtual compendium of Ives’s musical experience, last played by the BSO in 1992 in performances led by Seiji Ozawa. The work consists of four movements: a mystical prelude, a wildly dissonant second movement but in a surreal vein, a quiet and meditative fugue, and a transcendent finale. Ives described the symphony: “The aesthetic program of the work is … the searching questions of What? and Why? which the spirit of man asks of life. This is particularly the sense of the prelude. The three succeeding movements are the diverse answers in which existence replies.”

The symphony is an extraordinarily difficult piece of music. The score calls for a chorus (in the outer movements) and massive orchestra—including an offstage group of strings and harp, and a vast array of percussion – and is an intricate collage of musical sounds, seemingly chaotic at times. The biggest challenge for the conductor is to bring the many varying tempos and the intersecting planes of sound together into a coherent whole, especially in the raucous second movement. With the aid of assistant conductor Andrew Grams, Gilbert kept everything co-ordinated and delivered an accessible and deeply moving account of Ives’s epic masterpiece. He made perfect sense of the pandemonium in the second movement ‘Comedy’ (Ives’s title), elicited a wonderfully warm tone from the strings in the gentle and lovely third movement, and the music seemed to dissolve into eternity in the expansive and searching finale.