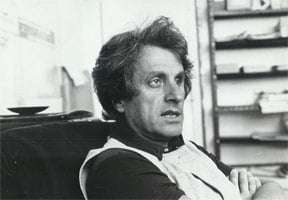 The second and final concert in the BBC Symphony Orchestra’s day-long programme of events (including talks and films) celebrating the life and works of the Greek-French composer Iannis Xenakis (1922-2001) brought together a collection of works for orchestra and a cappella voices with one of his most-seminal instrumental works. Opponents of Xenakis accuse him of being overtly mathematical and unrelenting in his approach may have felt their criticisms somewhat justified by much of the music on offer here; others less familiar to his work would have felt exhilarated by the sheer visceral impact and originality of Xenakis’s creativity.

There couldn’t be a more mind-blowing introduction to Xenakis’s music than the opening juggernaut of a work, Tracées. Just six minutes in length but feeling like an eternity as Xenakis batters the senses with a relentless sonic assault of a 94-piece orchestra playing all-out fortissimo and with glissandos, a favourite device of Xenakis’s which cropped up frequently all evening.

The 1953 trilogy “Anastenaria” received its first UK performance; the third part ‘Metastaseis’ is usually performed separately. The first piece, ‘Procession aux beaux claires’ is the most striking and most conventional work played in this concert, reminiscent of Stravinsky’s “Les noces” in its depiction of pagan rituals, the insistent rhythms underpinned by antiphonal-chanting male and female choruses. Here, in an evening of brutally intensive music, Brabbins and the BBCSO (generally brilliant) rather underplayed Xenakis’s brutal, jagged rhythms; the BBC Singers too sounded a mite opaque in their enunciation and a little timid in their delivery. The second movement, ‘Le Sacrifice’ was, in contrast, abstract and austere, whereas ‘Metastaseis’ simply shone in its brilliantly original use of string glissandos.

The a cappella works further showcased Xenakis’s experiments with sound and, like the instruments of the orchestra, stretch the voice to its limits. Sea-Nymphs is a setting of Ariel’s Song from “The Tempest”, the words sung out of order, repeated, and notes held for what seems ages; rhythms are staggered. The Singers, finely drilled by Stephen Betteridge, made light of the fiendishly difficult writing delivered a performance of great luminosity. Even more remarkable was their contribution to “Nuits”, a work composed out of anger at the military take-over in Greece in 1967. Here Xenakis resorts to fragments of words, some invented by the composer, derived from ancient Sumerian and Persian. The 12 voices of the BBC Singers coped magnificently with the interweaving textures and poly-rhythms; in one section even fragments of words are abandoned for cries, whistles and sighs.

The 12-minute piano work, Mists, incorporates many of Xenakis’s most theoretical concepts on music such as “stochastic” composition and “sieve theory”. In reality, the piece sounds like Expressionism running into Serialism with Xenakis typically gesturing towards glissandos on an instrument which can’t play them. Rolf Hind, one of the leading exponents of contemporary music as soloist and composer, brought virtuosity and humanity to a piece which teeters on the edge of being brutal. 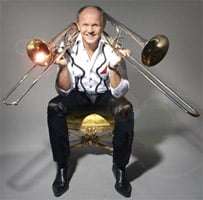 Christian Lindberg commissioned Troorkh, a concerto for trombone and orchestra. Lindberg first thought the piece unplayable, and with 56 high Fs in the score it’s easy to see how he came to this conclusion. Like so much of Xenakis’s work, it’s a piece to admire rather than to love and also pushes musicians to extremes and beyond. After close on 20 years, Troorkh seems no easier for Lindberg, requiring superhuman levels of stamina to get through the rapid-fire glissandos and writhing complexities, accents frequently pushed to a full three-and-half octaves. Watching Lindberg in action is an event in itself. In between passages he would be limbering up, sucking in large amounts of air ready for the next assault. A Herculean effort, too, from the trombonists of the BBCSO, pushed almost to the same extremes in passages mirroring the soloist.

After all that had gone before, the final work, Antikhthon, came almost as an anti-climax. A commission by Balanchine for New York City Ballet in 1971, this 18-minute work is another aural assault. Not as concentrated as the opening Tracées, there’s precious little respite and one is left feeling a little battered and bruised. Full marks though to Martyn Brabbins and the BBC forces who continually displayed their versatility, discipline and sheer staying power over this very long evening.