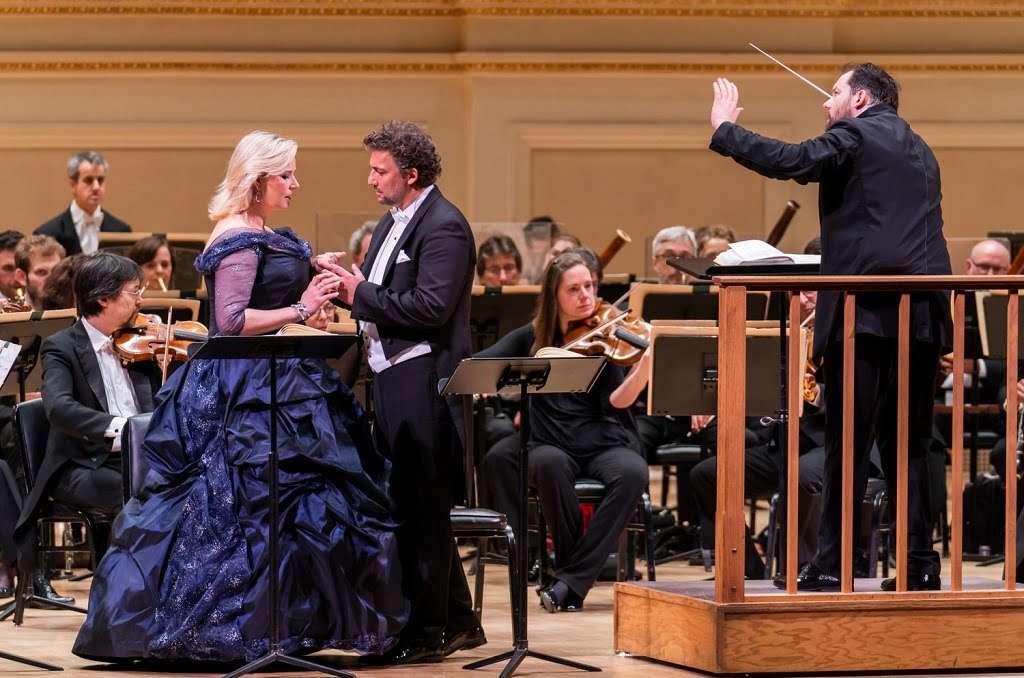 In Tristan und Isolde, Wagner sought to elucidate what absolute, unrestrained Love might be like and how it approaches self-annihilation. There is much Freudian psychology in this approach (Eros and Thanatos merging). Whether or not Wagner succeeded doesn’t matter: he created a work of art that both consummates High Romanticism and looks forward to the psychology-dominated modern era.

Andris Nelsons assembled some of the best Wagner singers available, and offered the core second Act of this masterwork. Jonas Kaufmann and Camilla Nylund brought to their roles substantial vocal gifts. Although the assembled voices performed quite well, tension was restrained and urgency controlled, and the unbounded madness of both words and music in the love-duet was rather tepid, too rational to affect a sense of madness or, in fact, much emotion at all. Witness Tristan’s entrance at the beginning of scene two: to music that should convey unrestrained intensity (rather underplayed by Nelsons), Kaufmann strode lackadaisically onto the stage and greeted Nylund with a respectful if faint smile. The two then proceeded through the hour-long scene reading from their respective scores, separated by the conductor’s podium, and not seeming to show much interest in what they were singing, presumably to each other. Certainly, one can’t expect exertion of the full measure of emotion in a concert performance, but much more could have been done by the lovers to express the turgid passion that their words express.

Camilla Nylund is essentially a lyric soprano and has done some accomplished work in the lighter Wagnerian roles. Her Isolde on this occasion lacked personality, dramatic tension and involvement, although she certainly has ringing top notes, but her middle range is hollow and colorless, and she made virtually no eye contact with Tristan – possibly a result of some insecurity in reading her role; she needs to get more deeply into this role so that her manner of expression fulfills its emotive depth.

Kaufmann, on the other hand, has the power, heft and vocal depth of a true Heldentenor. He was able to sing above the orchestra with unfailing strength the like of which we have not heard for some time. Both his voice and his manner of expression have matured since his debut at the Metropolitan Opera in 2011 as Siegmund in Die Walküre. As Tristan he was rather temperate in expression, but nevertheless heroic and dramatically sound.

The contributions of Mihoko Fujimura and Georg Zeppenfeld deserve special mention. Fujimura was a tour de force in the first scene. Sometimes her strong voice soared above Nylund’s. But Fujimura treated the role of Brangäne much like a Lieder singer might, with little effort to draw attention to its dramatic character. Zeppenfeld’s King Mark was very impressive. His deep, rich voice and noble bearing made his rather lengthy monologue, in which he virtually begs Tristan to explain his treachery, seem all the more sympathetic. Andrew Rees’s Melot and David Kravitz’s Kurwenal were admirably portrayed.

What was most disappointing was Nelsons’s rather lackluster, restrained reading. It seemed as if the madness admittedly expressed in the music turned him off, so he opted for a more rational approach, favoring lyricism and clarity over dramatic tension. Sometimes tempos dragged mercilessly, Nelsons apparently intending to tone down the intensity of the music. Yet in soft passages, such as the ‘Peace of Love’ duet, his rather broad tempo let the singers express their feelings in linear stretches of tender emotion, but the terraced buildup to the shatteringly abrupt broken climax, when Melot and the King suddenly enter following a warning by Kurwenal, was ineffectual.