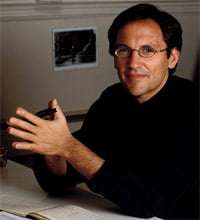 Argentine-American composer Osvaldo Golijov has become a BSO favorite over the past decade. At the suggestion of BSO artistic administrator Anthony Fogg, the composer, a Boston area resident, reworked Last Round (a piece for double string quartet plus double bass commissioned and premiered by the Birmingham Contemporary Music Group under Stefan Asbury in 1996) for string orchestra. The BSO under Ozawa premiered the new version in 2000. More recently, the BSO commissioned Golijov’s Azul, premiered by the orchestra and Yo-Yo Ma at Tanglewood, the BSO’s summer home, in 2006.

Ausencia (Absence), the work that opened this program, is a hybrid work, made up of a short piece for solo cello called ‘Ômaramor’, which Golijov wrote in 1991, and ‘Lentissimo’, a newly revised version of one half of Last Round. The pieces are tied together by a newly composed part for solo cello.

Golijov’s major works have been inspired by a wide range of sources, musical and otherwise, and the pieces on this program are no exception. ‘Ômaramor’ (an elision of the name ‘Omar’ with the Spanish for ‘love’), which makes up the first half of Ausencia, commemorates the exiled Argentine playwright Omar del Carlo. Both halves of the work pay tribute to the Argentine tango tradition, in particular the work of Astor Piazzolla, and the legendary tango singer and composer Carlos Gardel. In ‘Ômaramor’ the solo cello ruminates on the melody of Gardel’s iconic tango “Mi Buenos Aires querido” (My Beloved Buenos Aires). In ‘Lentissimo’ the solo cello line extends over the body of the strings as they fantasize on the refrain of Gardel’s song.

Yo-Yo Ma wasted no time getting to work on Ausencia. Once the welcoming applause for him and conductor Miguel Harth-Bedoya died down, he sat down and immediately launched into a compelling account of ‘Ômaramor’. He played the exhilarating piece with his familiar intensity and a marvelous sense of spontaneity. In the second, more melancholy half of the work, which the composer has described as “a final, seemingly endless opening sigh”, Harth-Bedoya led Ma and the BSO strings in a heartfelt performance.

The members of the audience realized they were in for something different when Ma re-appeared to take up Azul (Blue). He and Golijov’s “21st century continuo” players (Jamey Haddad and Keita Ogawa, percussion, and Michael Ward-Bergeman, accordion) appeared in shirtsleeves. Ma sat to the left of Harth-Bedoya, who was in the conductor’s usual downstage center position, but to the maestro’s right sat the ‘continuo’, together with their amplifiers.

Azul is very accessible and appealing. Faithful to Golijov’s aesthetic, it is also a highly allusive, multi-layered piece. Lyrical outpourings on the cello are combined with solos on exotic percussive instruments, obsessively repeated riffs, and futuristic electronic music. Strongly influenced by the music of 15th-century Spain with its mingling of Christian, Arab and Jewish cultures (most notably in the section called ‘Yrushalem’), the music also echoes the baroque past and South American folk melodies – all subtly enhanced by electronics. The music is kaleidoscopic and constantly moving forward, until the final coda, aptly titled ‘Shooting Stars’, when it is drawn into something resembling a wind tunnel and gradually fades into emptiness.

The intricacies of Golijov’s wonderfully atmospheric music grabbed the audience from start to finish. It was impossible to resist the intensity of the performance, especially Ma’s exuberant and incisive playing. Guest percussionist Haddad and accordionist Ward-Bergeman delivered their prominent parts with passion and verve, and conductor Harth-Bedoya drew an extraordinarily fervid accompaniment from the BSO players. There was a long and tumultuous ovation for composer and performers.

The concert concluded with a lively account of Dvořák’s Eighth Symphony. Harth-Bedoya’s clear and incisive gestures made the most of the music’s dynamic contrasts, bringing a vibrant energy to the outer movements, and whipping up the final pages to deliver an exhilarating finale.