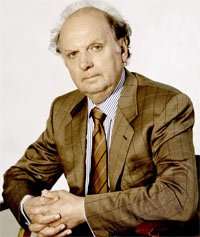 This week’s BSO program is one of three highlighting the cello this season. Next week Lynn Harrell performs Elgar’s Cello Concerto with Gennadi Rozhdestvensky conducting, and in January Pieter Wispelwey plays Haydn’s Cello Concerto in D on a program led by Bernard Lebadie. For this concert Alban Gerhardt, whose only previous BSO appearances were in April 2005, when he made a triumphant debut performing Schumann’s Cello Concerto with Christoph von Dohnányi conducting, returned to Symphony Hall to take on the daunting solo part in Dvořák’s Cello Concerto.

Gerhardt delivered an intense performance, full of force and feeling, with supreme confidence and conviction, without a trace of self-indulgence. His passagework was exemplary, always clean and well articulated; his range of tone and dynamic impressively wide as he negotiated the landscapes of Dvořák’s intensely lyrical score on his magnificent Gofriller instrument.

The orchestral playing under guest Marek Janowski was superb, never masking Gerhardt’s often gentle playing. Most notable among the appealing solo contributions were James Sommerville’s rendition of the horn passage in the first movement, and Elizabeth Rowe’s poignant flute in her dialogues with the cello in the Adagio. Gerhardt’s passionate and highly nuanced performance was acknowledged by rounds of enthusiastic applause, to which he responded with an encore, a playful Moderato by Rostropovich that added a more contemporary touch to the program.

The second half of the program was taken up by Beethoven’s ‘Pastoral Symphony’. Conducting from memory, Janowski applied steady speeds, which produced a delightfully fresh, elegant result. The opening movement was light and nicely pointed. The second movement ‘Scene by the brook’ was taken at a slow, meandering tempo, allowing a fair amount of expressive freedom in the birdcalls at the end. The rustic merriment of the scherzo was highly spirited, the ‘Thunderstorm’ boldly dramatic, the finale refreshingly radiant. The performance earned a fervid ovation, but after the concert ended, it was the memory of Gerhardt’s ardently expressive playing that lingered.